The football and Fortnite tandem won $125K USD to their charity of choice. The successful crossover between the NFL and Twitch spawned a follow-up with an entirely different format.

Over the last two months, NFL players and Twitch streamers competed in various competitions, including a player showcase featuring the league’s Fortnite elite, followed by a Twitch streamer-exclusive round of Zone Wars. The list of winners included Fortnite World Cup Champion Bugha, Tocata, StableRonaldo and Scoped. All four players secured draft picks ahead of the Streamer Bowl II Finals, but Clix’s victory last year yielded him the first pick.

Clix selected his partner from last year — Tarik Cohen — but others were in the mix as well. Some notable NFL players such as JuJu Smith-Schuster, Kurt Benkert and Aaron Jones found themselves in the thick of competitive Fortnite alongside and against excellent players. Thirty community members earned their way into the tournament through an online competition in January. In total, thirty teams of three embarked on a quest to claim the $250K USD first prize to charity.

The Streamer Bowl II was a surprisingly entertaining tournament, considering the circumstances and varying skill levels. However, Clix, Tarik Cohen and Xacial proved too powerful to overcome. The defending Streamer Bowl Champions came out of the gate hot with a Victory Royale in match one. Clix and company came up empty in game two but rallied back in game three with yet another Victory Royale. With only one match remaining, Clix did what he does best and shouldered his team.

The young Fortnite phenom racked up multiple eliminations en route to a fourth-place finish, which proved enough to secure his team the Streamer Bowl II Championship and $250K USD to a charitable cause. Unsurprisingly, the fans voted Clix as the MVP of the tournament, and he deserved it, considering the effort he put forth in the final match alone. 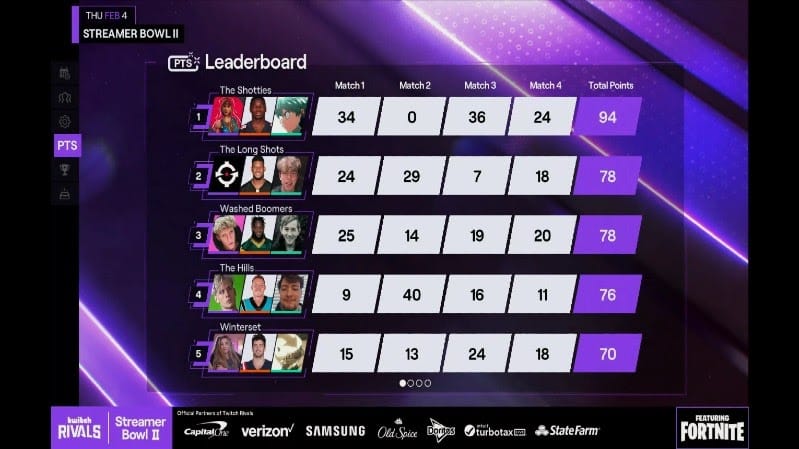 Former duo partners Scoped and Tfue finished in a virtual tie for second place with 78 points apiece, but the breaker ultimately swung in favor of Scoped. His team walked away with $150K USD to charity, whereas Tfue, Aaron Jones and griffinmat won $100K USD. Despite winning game two, Nate Hill’s team finished in fourth, netting them $75K USD to their charity of choice. Team SoloMid member EmadGG won the final match and moved up to sixth place in the standings. Here is the entire leaderboard after four intense Fortnite matches.