On the other side, Fortnite World Cup Champion Bugha and Tocata claimed the first two Zone Wars tournament crowns, securing them a top pick in the upcoming Streamer Bowl 2 Player Draft. Cody “Clix” Conrod, Turner “Tfue” Tenney, Kyle Van Noy and more got in on the action in the third week of this Twitch Rivals competition.

Week three of the Streamer Bowl 2 followed the same format as the first two. The night began with a “pub stomp” competition involving two NFL players split into separate teams alongside Fortnite streamers. Clix, StableRonaldo, Nate Hill and Tfue then squared off in a Zone Wars tournament with $15K USD and a draft pick up for grabs. Let's see if Clix – the reigning Streamer Bowl Champion – could replicate his success from last year. 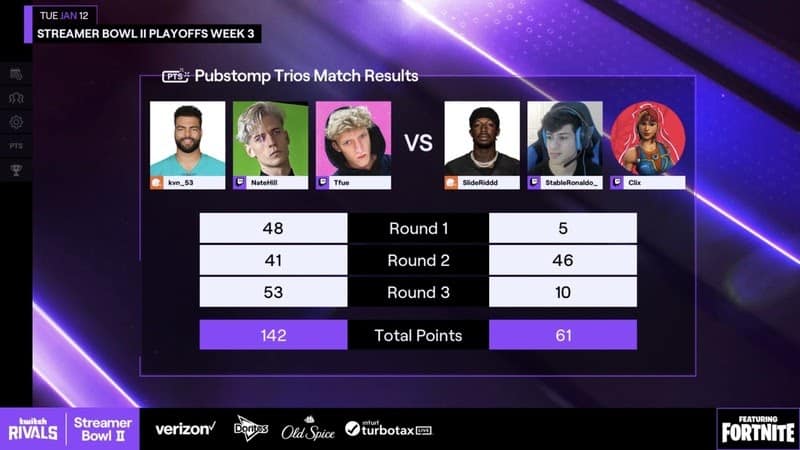 As they've done for many years, Tfue and Nate Hill annihilated players in pub stomp portion with Miami Dolphins linebacker Kyle Van Noy's help. These three players combined for over 40 points in each of the three matches and ended with 142 overall. Clix, StableRonaldo and Atlanta Falcons wide receiver Calvin Ridley struggled mightily, managing only 61 points. Despite earning 46 points in game two, Tfue's squad kept their foot on the gas and outclassed Team Clix. However, the competition continued into Zone Wars, where Clix would ultimately have the last laugh. After losing in the NFL Player Spotlight, Clix rallied back in a format that is all too familiar to him. Clix put on a clinic for the ages in Zone Wars, winning nearly every match against StableRonaldo, Tfue and Nate Hill. He controlled height when he needed to and earned eliminations at will. This effort to a 42-point point performance for Clix, 29 points better than StableRonaldo in second place. As a result, the six-time Fortnite Champion Series (FNCS) Finalist collected $15K USD.

Since Clix already owns the first pick in the Streamer Bowl 2 Draft, StableRonaldo earned a top-five selection and walked away with $12.5K USD. Veteran players Nate Hill and Tfue could not match the pace and pressure of Clix. But neither Fortnite “OG” left the competition empty-handed. It was an exciting day of competition as the Streamer Bowl 2 approaches rather quickly. Only one week remains before the draft, where the top-five streamers will each select an NFL player to compete with for $1 million in charity prizing!