Fortnite: The End, What Does it Mean? The last 24 hours of Fortnite: Battle Royale has been an emotional roller-coaster unlike any other. To sum up exactly what happened during The End, players watched as the Storm dissipated, a rocket blasted into the sky out of Dusty Depot and several unidentified rifts appeared in the sky above. The aforementioned rocket proceeded to disappear, a large rift appeared and the rock reappeared propelling back down toward the players watching below and spiraled out of control. After the rocket began flying all around Dusty Depot, players watched as several more rockets appeared out of the rifts above, and then those followed suit with the original rocket. 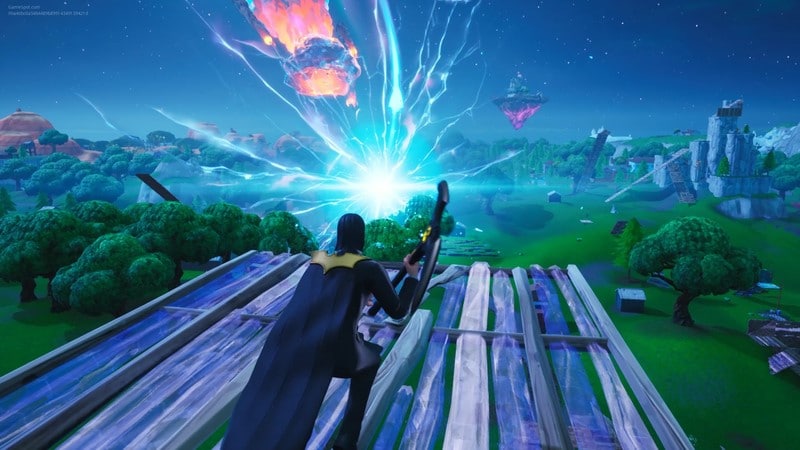 As all the rockets flew around, they made their way into one rift above Dusty Depot, the rift then relocated above the meteor located over Factory. The rockets subsequently shot out of that rift and filtered into a rift below the meteor. All of this commotion below the meteor then sucked the meteor into that very rift causing a brief moment of serenity. A rift arrived above players at Dusty Depot, and a rocket shot out of that rift into the rift at Loot Lake. This force pushed players off of their structures and they could only watch as a massive rift blasted the meteor and several rockets down toward Loot Lake. The meteor made an impact on the Loot Lake rift zone, causing all surroundings to distort. Players lost control of their characters and the rift sucked everything into what appeared to be a black hole. What followed rapidly became an infamous image across all of social media. A black hole appeared, and this left players with an insurmountable amount of questions. The only option on the screen is to exit the game. This left players speechless and wondering what could come next. Fortnite’s social media accounts went completely dark, and we’ve yet to hear from Epic Games on what exactly this all means. Many speculate that this delay allows for the Fortnite developers to put the finishing touches on Fortnite Chapter 2. Unfortunately, at this point, we are truly unaware of what lies in the fate of Fortnite: Battle Royale. Players soon discovered a minigame within the black hole screen. The minigame will activate upon entering the Konami Code. On most consoles, it is Up, Up, Down, Down, Left, Right, Left, Right, B and A in sequence. The minigame is simply a classic fixed shooter arcade-style game similar to Galaga. It allows players to control a slice of pizza and shoot hamburgers as players eagerly await what will come next after the black hole.

This is the complete text the numbers mean:

“I was not alone. Others were outside the Loop. This was not calculated. The moment is now inevitable."

A seemingly random set of numbers mysteriously appeared around the black hole as players watched. Initially, it was unknown what the numbers pointed to, but speculation began and people began attempting to decode the numbers into a message. A Twitter user by the name of ShiinaBR used each number in coincidence with The Visitor Tapes made available in The Overtime challenges at the end of Season X. This message could be accurate, but Epic Games has neither confirmed nor denied any of the speculations.

All Eyes on Fortnite

THERE IS OVER SIX MILLION (!!) CONCURRENT VIEWERS FOR THE FORTNITE 'THE END' EVENT ACROSS TWITCH AND YOUTUBE INCLUDING OVER 4 MILLION ALONE (!!) ON YOUTUBE

According to Rob Breslau aka Slasher on Twitter, The End had nearly 4M viewers across only Twitch and YouTube at its peak. Popular Fortnite streamer and professional player, Turner “Tfue” Tenney, managed upwards of 300K viewers himself. Fortnite’s own Twitch channel peaked at over 170K viewers during The End. Sony’s PlayStation Network even crashed during the event.  Needless to say, all eyes shifted back to Fortnite in the midst of its most hyped event since the game’s inception. We now have to wait and see what will come of this as Fortnite Twitter account has gone dark. The only Tweet that remains up is the live stream of the now-infamous black hole. The hashtag of #FortniteBlackout is actively trending on Twitter as fans of the Battle Royale eagerly wait for what’s next.

When Will Fortnite Return?

I have independtly confirmed the authenticity of a discovery that points to "The-End" lasting until Tuesday, 6AM EST

This is not stuck in stone, this info is from https://t.co/0TDeMk7Bda code. pic.twitter.com/ElnNFKppWn

Lucas7yoshi on Twitter tapped into the code embedded in Fortnite’s website. It appears that Fortnite may return on Tuesday, October 15th at 3 AM PST /6 AM EST. Again, we can treat this as speculation with no confirmation coming from the Fortnite developers. All of this speculation is exactly what Epic Games is looking for in terms of a response to the black hole. With millions of people engaging and discussing The End, it will make the relaunch of Fortnite Chapter 2 unlike any other.

Here is your hint, and I’m not joking. pic.twitter.com/Tqh9dhFEEL

Popular Mixer streamer, Tyler “Ninja” Blevins also seems to have indicated that Fortnite will return on Tuesday. He requested and received well over 250K Retweets on a single Tweet sent out regarding a hint as to when we will have an update. The following Tweet included Blevins simply stating the word “Tacos,” which could be referring to Taco Tuesday. The speculation is leading everyone to believe that Fortnite will make its triumphant return on Tuesday, October 15th in some capacity.

The Genius of The End

With many players souring on Fortnite Season X, Epic Games needed a return to form out of the transformational Battle Royale title. Fortnite arrived on the scene with an impact, and many believed Season X to be the worst of all time. The dissatisfaction of players overtook what Fortnite had become. Despite the constant patches and adjustments, the game grew tired on many popular streamers and professional players. The End piqued the interest of nearly the entire internet.

With millions upon millions tuning in to watch their favorite streamers react to the global event across all of Fortnite. The irony of The End stripped the ability to play Fortnite from its fans and critics. Those who criticized Fortnite throughout Season X are now unable to play it. The hype of Fortnite Chapter 2 or Season 11 is at an all-time high, and we just have to wait and see what pans out, and more importantly, if Epic Games can deliver an outstanding season of Fortnite: Battle Royale.