Learn how to unlock Prowler in Fortnite Chapter 3 Season 2.

Marvel’s The Prowler character is officially available to unlock in Fortnite Chapter 3 Season 2. Epic Games’ recurring collaboration with Marvel Comics allowed this hero to appear alongside Doctor Strange in the newest season. However, unlike Doctor Strange, Prowler would ultimately emerge as a not-so-secret character in the Battle Pass. Epic Games unleashed Prowler Quests, which rewards players with various cosmetic items upon completion.

Today, ESTNN brings you a complete list of Prowler Quests and each corresponding item. Ultimately, you’ll learn how to collect every item available in this Fortnite x Marvel collaboration. 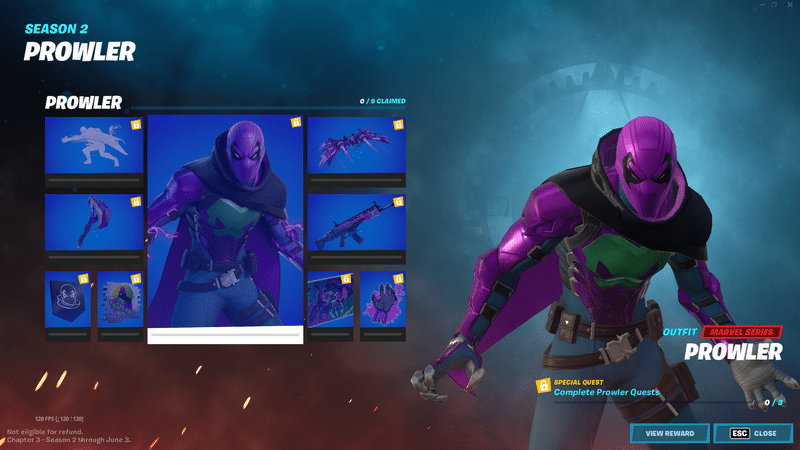 Players that load into Fortnite today will find seven Prowler Quests. Each completed challenge unlocks a Prowler-themed item, including the base outfit, glider, pickaxe, etc. You’ll need to complete any three Quests to unlock the Prowler outfit.

Here is a complete list of the Prowler Quests available in-game: The challenges are relatively straightforward and should not take longer than a few hours to complete. Unfortunately, most Fortnite players will also be on the hunt to unlock Prowler, so you may have to develop your own strategies. You’ll have until the end of this season to acquire this character and complete the Battle Pass. Be conscious of your time and make sure you don't let this opportunity slip away.