Find out the highest earning Fortnite players of 2020.

Competitive Fortnite: Battle Royale in 2020 was another milestone year in the growing legacy of one of the most popular games of all time. In some senses, it seems that the competitive scene has usurped casuals with the evolution of building, editing and utilizing in-game mechanics to gain an edge on opponents. Unfortunately, fans and players lost the privilege of a second Fortnite World Cup due to the ongoing global pandemic. However, that didn’t stop Epic Games from fronting tens of millions in cash for its seasonal Cash Cups, Fortnite Champion Series tournaments and more. The world’s top players welcomed the opportunity to pad their career earnings.

Many of Fortnite’s best competitors earned well over $100,000 in winnings from tournaments alone. Thanks to @FNCompData, competitive Fortnite fans have access to all tournament earnings from each region. ESTNN compiled this data into one list, but keep in mind, Europe regularly bolsters the largest prize pools. Let’s take a look at the top ten Fortnite tournament earners of 2020.

Norwegian player Martin “MrSavage” Foss Andersen lands in the number 10 spot after an impressive year. The youngster signed with esports organization “100 Thieves” to begin 2020. That same weekend, he journeyed from his home country to California, where he competed at DreamHack Anaheim. MrSavage displayed expert technique at the event and ultimately walked away with first place and $30,000. After his historic performance, the 16-year-old returned to Norway, where he continued competing in tournaments from the comfort of his home. Savage played consistently well through the remainder of 2020, and capped off the year with over 10 tournament wins totaling more than $114,000.

The Invitational is complete and both our guys finish in the top 50.

2 wins for Aqua were the highlight of some great performances this FNCS with both players reaching finals.

Fresh off his Fortnite World Cup 2019 and FNCS Season X victory, Austria’s David “aqua” Wang continued to press forward in the competitive scene. In Chapter 2 – Season 2, aqua and former duo partner Stompy reached the FNCS Finals, where they secured fourth place and $45,000. Later that season, aqua proved his skill level and consistency even more in the FNCS Invitational. The Austrian claimed third place and $70,000. It impressively took only two tournaments for aqua to bag well over half of his prize earnings for the year. He nearly cracked the $120,000 make with ease.

In a sea of European players, Diego “Arkhram” Lima is one of only two non-Euros to crack the top ten in highest earnings of 2020. It took a banner effort to boot, as Arkhram continued proving exactly why he’s one of the best Fortnite players in the world. In an unprecedented fear, the 100 Thieves member secured victory in two of four Fortnite Champion Series tournaments in 2020. He won both the solo FNCS Invitational and trio FNCS Chapter 2 – Season 4 for a grand total of $55,000. Arkhram also took second place in FNCS Chapter 2 – Season 3 and third in Chapter 2 – Season 2, netting him another $19,900. Despite playing in a region with a much lower prize allotment overall, Arkhram smashed expectations to the tune of over $127,000.

MORE FROM ESTNN
Where to Find Klombo in Fortnite Chapter 3

Danish Fortnite player Thomas “Th0masHD” Høxbro Davidsen is one of a small group of players who experienced a breakout year in 2020. He thrives in all formats and nearly every tournament that he touches. Th0masHD’s FNCS performances alone included 18th in Chapter 2 – Season 2, 4th in the FNCS Invitational, 18th in Chapter 2 – Season 3 and 3rd in Chapter 2 – Season 4. Those results netted Th0masHD just over $100,00 USD to go along with nearly $40,000 USD from Cash Cups and DreamHack Online events. He comfortably settled into the seventh spot on this list.

Five-time FNCS Finalist and all-around personality Benjy “benjyfishy” Fish brought his career earnings up significantly after another brilliant year. The 16-year-old consistently finds himself atop leaderboards no matter the season, meta or format. Benjy qualified for three of four FNCS Finals in 2020, and his best finish was 8th in Chapter 2 – Season 4. He earned more than $85,000 USD from the Fortnite Champion Series. Benjy comprised a startling $43,000 in Cash Cup winnings, which is more than any other player on this list. This is just one of many reasons Benjy is one of the best Fortnite players in the world.

French player Alexandre “Andilex” Christoph appeared on the competitive Fortnite radar in late-2019 after an outstanding DreamHack Winter offline performance. More of the same followed in 2020, where Andilex solidified himself as a top-three player in Europe. His successful career continued early in the year with another impressive LAN result, where he took sixth place at DreamHack Anaheim. Andilex proceeded to win FNCS Chapter 2 – Season 2 with duo partner Nayte and rounded out the year with a runner-up finish in Chapter 2 – Season 4. The Frenchman bagged over $115,000 USD from the Fortnite Champion Series and another $50,000 USD in various other online tournaments. It was a good year for one of Europe’s top players.

MORE FROM ESTNN
Fortnite: Where To Find Tilted Towers in Chapter 3

The game that won me 100k 🏆 pic.twitter.com/6yIihQbNfU

FNCS Invitational winner Furious is the only NA East player to crack the top ten. Considering the massive difference in prize pools, it’s inconceivable to see one of 2020’s breakout stars so high on this list. Although he started the heat relatively quiet, the previously mentioned FNCS Invitational began the uproar of this insane controller player. Furious took fourth place and second place in the FNCS Qualifiers leading into the Grand Finals. He then accumulated 217 points en route to victory and the $100,000 USD grand prize. Furious finished the year with $168,000 USD in winnings.

Fortnite World Cup 2019 runner-up Jaden “Wolfiez” Ashman managed to fly under the radar through 2020 despite landing at number three on this list. His best singular tournament of last year was the FNCS Invitational. Wolfiez claimed second overall only behind German player JannisZ, and collected $95,000 in the process. This showing accounted for more than half of his tournament earnings for the year. Wolfiez proved for the second straight year that he and his controller can produce fireworks at any given moment.

Wave Esports member JannisZ was relatively unknown to the masses prior to 2020. It didn’t take too long for competitive Fortnite fans to learn his name as he appeared atop leaderboard after leaderboard. JannisZ’s career-defining performance occurred in Chapter 2 – Season 2, where he took first in the FNCS Invitational. It was a historic display of Fortnite as the win and $120,000 USD. JannisZ held strong over the tournament’s six closing matches, netting himself the biggest payday of his young career. The German player continued to dominate the EU region and accumulated another $91,000 USD in prize money as he closed out the year with the second most earnings of last year.

It’s not surprising to see ESTNN’s “2020 Fortnite Player of the Year” in the number one spot. Slovenian phenom Tai “TaySon” Starčič wreaked havoc across the Europe region without breaking much of a sweat. He began generating intrigue after finishing fifth in the FNCS Invitational, good enough for $50,000 USD. TaySon then went on a rampage, winning back-to-back FNCS tournaments in Chapter 2 – Season 3 and Chapter 2 – Season 4. Those two victories added another $117,000 USD to his earnings in 2020. It took TaySon only three tournaments to surpass spots five through ten on this list. The 16-year-old concluded the year with more than $224,000 USD in prize money, making him the wealthiest Fortnite player of 2020. Fortnite: Where To Find Tilted Towers in Chapter 3 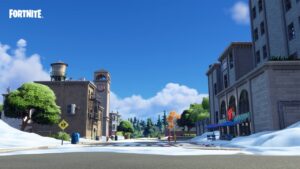