We're breaking down the week one FNCS Invitational results.

Week one of the FNCS Invitational concluded earlier this evening. The results across all seven competitive Fortnite regions are in. Although the week one competition narrowed 600 players down to 300, the games were intense as they could be. Despite some of the usual server kinks and long queue times, players were able to showcase their abilities. The top 300 from each region will move onto week two, where they will look to win more money. For this format, players add their scores up over two days, and the result dictates where they will compete next weekend.

Each region had its exceptional performances captured on individual streams and the official Fortnite broadcast. We would like to thank KinchAnalytics on Twitter for providing fans and players a resource for cumulative scores. Let’s take a look at how each leaderboard broke down at the top in all seven regions.

Benjyfishy maintained a similar pace that he set on day one to claim first overall in week one of the FNCS Invitational. He blew all of his opponents out of the water with a whopping 452 points across the two days of competition. His total includes 77 eliminations as well, cementing him as one of the favorites heading into week two. This performance is one of the many reasons people believe benjyfishy could win the entire competition.

Letshe of Team Atlantis took second place after finishing behind benjyfishy on day one. The EU controller king put forth one of the most impressive end games of the entire tournament. Team Liquid’s mitr0 competed under the unassumed name of get prefired kid. He ultimately took third overall and first place on day two with 208 points. These three impressed immensely and will move onto week two with 297 others. 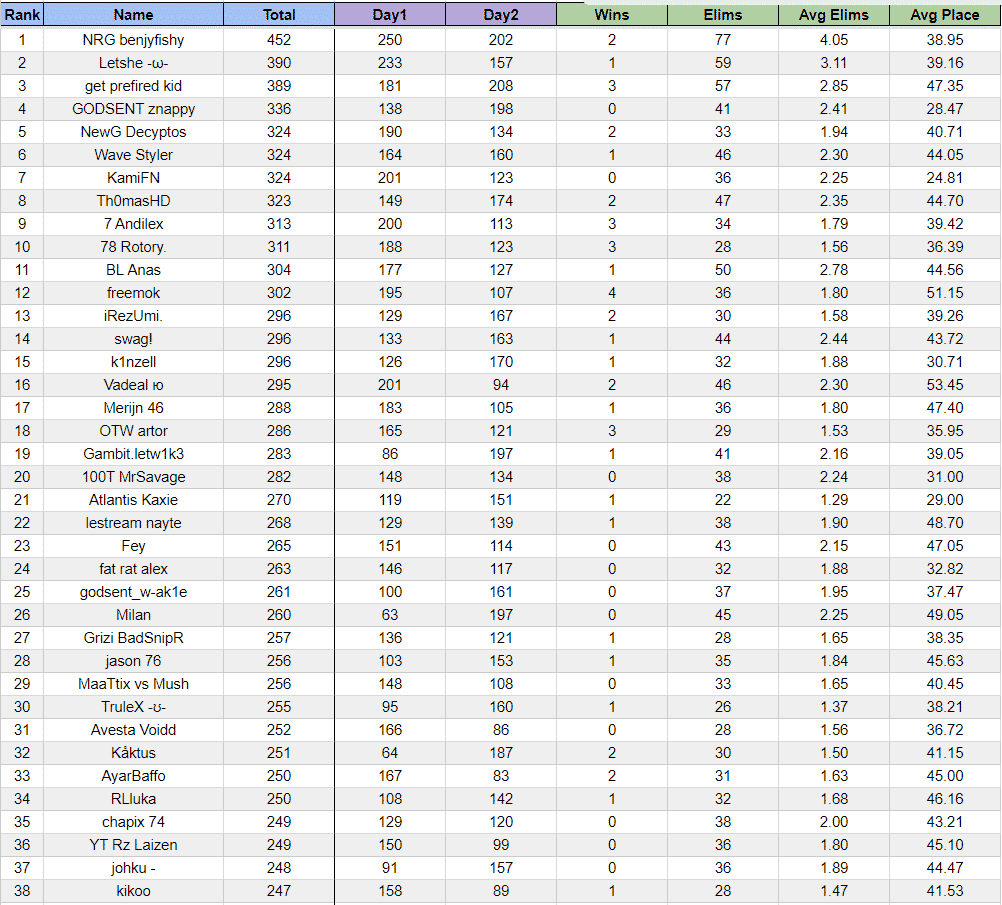 Commandment of Team SoloMid fell off significantly on day two, but his first-day score did the work for him. He accumulated 407 points over the two days. His day one performance included three Victory Royales back-to-back. Despite earning only 99 points on day two, Commandment was so far ahead that it didn’t matter.

Team Liquid’s Stretch surged up the leaderboard on day two with a mind-boggling 239 points. Those points combined with 120 on day one earned him second place on day two. Although he admittedly does not enjoy solos, he put on a clinic on day two. Console player nut remained consistent on day two and got himself third place in week one. Some other notable names in the top-40 include illest, Clix, innocents, Bugha, Av and RogueShark. Wavyjacob eclipsed 200 points on day two to take first in week one. This outstanding controller player did not even need a Victory Royale to reach 406 total points. However, 73 eliminations did a lot of the work for him on the scoreboard. For an unsponsored player, wavyjacob continues to show up in the NA West region. He will be in the hunt as we approach the Grand Finals.

Another usual NA West contender in Daddy powur took second place with 390 points. He earned two Victory Royales over two days of play and remained consistent throughout. Former keyboard and mouse competitor turned controller player NRG EpikWhale rounded out the top three. Much like wavyjacob and powur, EpikWhale stayed consistent with his scores over both days and secured himself a spot in week two. The top 40 features other notable names like 100T rehx, Thomuss, 100T Arkhram and many others. Top OCE player RepulseGod tacked 151 points into his first day total of 244, which was enough for first place. As we said yesterday, RepulseGod might be OCE’s best solo player, given his performance here. This win will give RepulseGod even more confidence as the FNCS Invitational continues. RBK volx smashed one day two with 236 points, moving him into second place. He is another one of Oceania’s top dogs seeking a significant victory and perhaps the Axe of Champions. After leading on day one, Vanish Thome fell back slightly. Frosty was able to creep in with an astounding 289 points on day two, which pushed him into first place. He earned four total Victory Royales and an impressive 74 eliminations. Thome fell back to earth slightly but still nearly reached 200 points on day two. Leleo bumped himself into third place overall. Here is how the top-40 shook out in Brazil. Ess put up back-to-back 189-point performances and took first place in the Asia region. As we’ve said before, consistency is crucial, and ess’ result proves that point. He won out over day one leader NSR EpikKogalerr by only four points. CR Ruri fell to third but still secured some cash after week one completed. SAQR Njby nearly reached 400 points over two days but ultimately settled for 394 and the win. Njby’s 227-point effort on day two won him the week one FNCS Invitational. Following closely behind was ASMR Xx73q he saw similar numbers as Njby only reversed from one day to the other. The top 300 will move on to compete in week two of the Invitational. Stay tuned to ESTNN for continued FNCS Invitational coverage and for the latest Fortnite news!