ESTNN breaks down the results after one week of FNCS Chapter 2 – Season 5.

Thousands of teams across Fortnite Battle Royale's seven competitive regions started their journey toward greatness in the seventh seasonal Fortnite Champion Series (FNCS) competition. The stakes are high, with $3M USD on the line this season and a crack at the elusive Axe of Champions, given only to the winning trios. This weekend marked the first of three crucial qualifiers as players located in Europe, NA East, NA West, Brazil, Oceania, Asia and the Middle East looked to secure a guaranteed position in the FNCS Semi-Finals. The top ten teams from each week move into round two of the competition — teams who don't are looking to compile enough cumulative points each week to reach the semi-finals.

Week one tasked competitors with 12 hours of gameplay spread across three days. Only the top 33 teams would reach the week one finals, where they competed in six matches to determine the first round of qualifiers. With all the specifics out of the way, let's take a look at how each region broke down as trios took their first step toward ultimate glory. 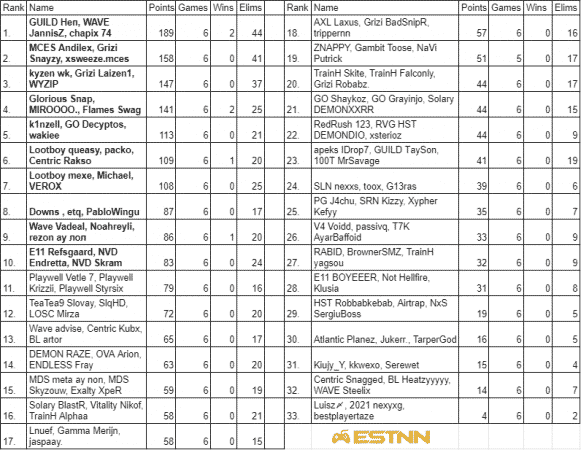 The competition out of Europe seemed over before it even began as Wave JannisZ, chapix and GUILD Hen obliterated all 32 other teams in the week one finals. This relatively new trio managed to hold the height position in a couple of essential matches and rode that wave to victory when it mattered. JannisZ, chapix and Hen compiled 189 points in total with two Victory Royales and 44 eliminations. It was a surgical performance out of these three as they secured themselves a comfortable position in the semi-finals.

After JannisZ left his former trio, teammates MCES Andilex and MCES Xsweeze filled his position on their roster with Grizi Snayzy. It worked out well in their first major competition together. The three players executed a strategy of consistency, which ultimately landed them in second place. Andilex, Xsweeze and Snayzy finished with 158 points, including 41 eliminations and six consecutive top-15 match placements. They rightfully earned a spot in the semi-finals alongside all of the teams to achieve a top-10 finish. 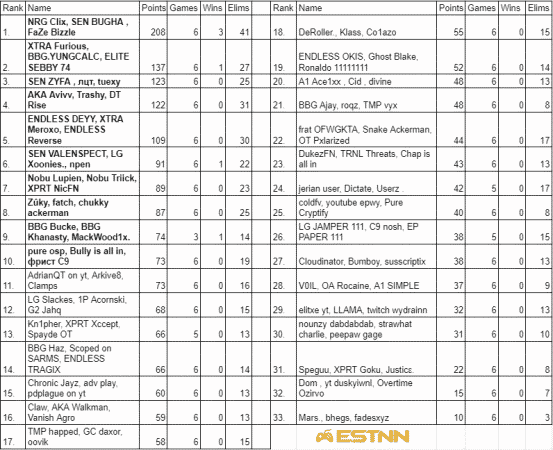 The undeniable force of FaZe Bizzle, SEN Bugha and NRG Clix would not back down in week one of the FNCS. These three Fortnite World Cup Finalists dominated all of their opponents without much resistance. Bizzle, Bugha and Clix amassed a whopping 208 points across the six closing matches. Which included 41 eliminations and three wins. It was an absolute clinic from a promising new team in the NA East region. 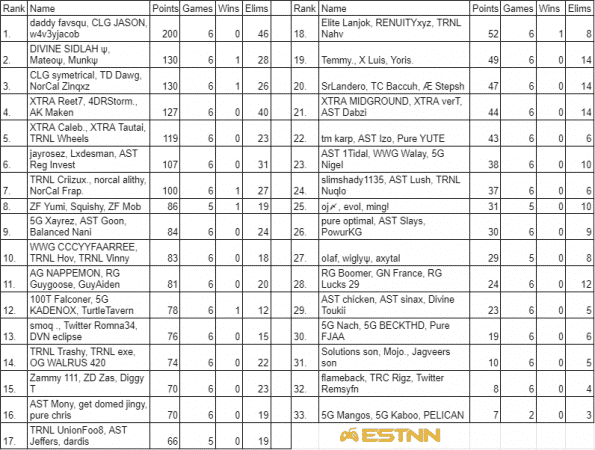 Week one for NA West went to DreamHack Champions wavyjacob, favs and their teammate CLG Jay. The three west coast players managed 200 points over the final six games, with 46 eliminations. It was quite showing, and this trio took full advantage of reigning champs EpikWhale, Arkhram and rehx’s absence in the last round. They have now earned a seat in the FNCS Semi-Finals through pure dominance.

With 130 points and 28 collective eliminations, SIDLAH, Mateo and Munk won the tie-breaker for second place over CLG symmetrical, TD Dawg and NorCal Zinqxz, who earned 26 eliminations. Those two teams will join wavyjacob’s team in the semi-finals with seven more top-10 finishers. 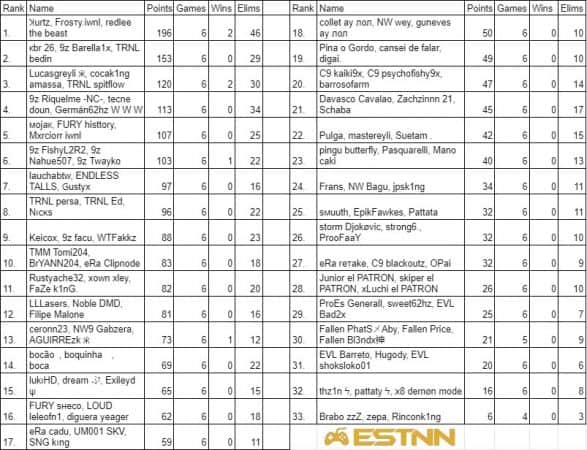 Last season's winners out of this region — Kurtz, Redlee and Frosty — picked up where they left off with another trio tournament victory. They are only one of a few teams who remained together through the brief period between Seasons 4 and 5. It was a wise choice, considering their 196 point-showing, which included two victories and a jaw-dropping 46 eliminations. Kurtz, Redlee and Frosty have put themselves in position to go back-to-back as FNCS Champions. 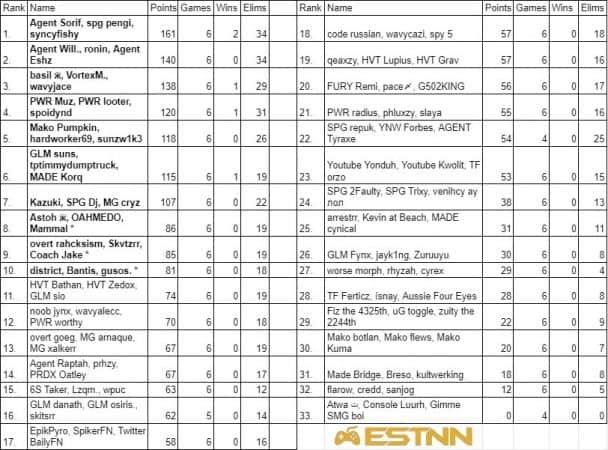 Agent Sorif, spg pengi, and syncyfishy proved too much for the remainder of OCE finalists. Across six matches, the winners accumulated 161 points; including 34 eliminations and two Victory Royales. Perhaps the most impressive stat was their consistent top-15 finishes. The stars lined up for these three, who showed up the entire region. In second place was Agent Will, ronin and Agent Eshz, who finished with 140 points and 34 eliminations. 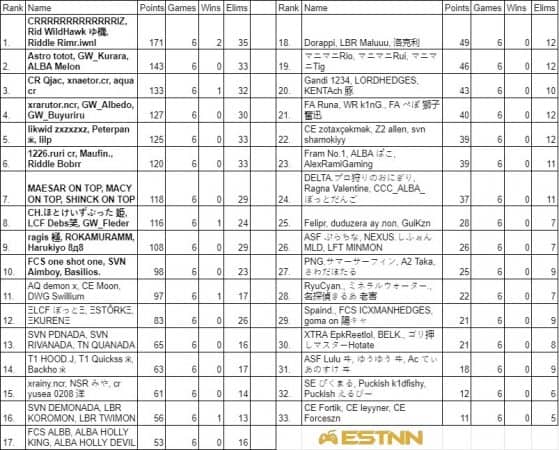 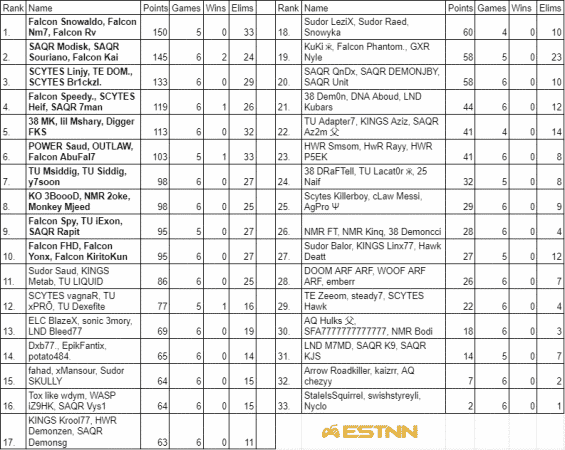 The Middle East team of Falcon Snowaldo, Nm7 and Rv claimed the top spot in their region, despite missing out on one of the six matches. These three outstanding players compiled 150 points despite not winning a match, which put them five points ahead of second. SAQR Souriano, Modisk and Falcon Kai snagged a second-place finish with 145 points and two Victory Royales.

That covers all of the results and qualified teams from the first FNCS Chapter 2 – Season 5 Qualifier. But the competition continues next week. As ten more teams in each region will look to push themselves into the next round.