Stage two of the FNCS Chapter 2 – Season 3 has come to a close in all seven competitive Fortnite regions. Four hundred players went to war on the Fortnite battleground in Europe, NA East, NA West, and Brazil to reach the top-25 in their respective heat. As expected, some hearts broke as several of the world’s best players failed to reach the Grand Finals. With the remainder of $5 million and the Axe of Champions on the line, these competitors will put forth their best efforts as Fortnite’s fourth-ever FNCS tournament series nears the end.

Let’s take a look at how the Grand Finals look for each region heading into the final day of competition in Chapter 2 – Season 3. 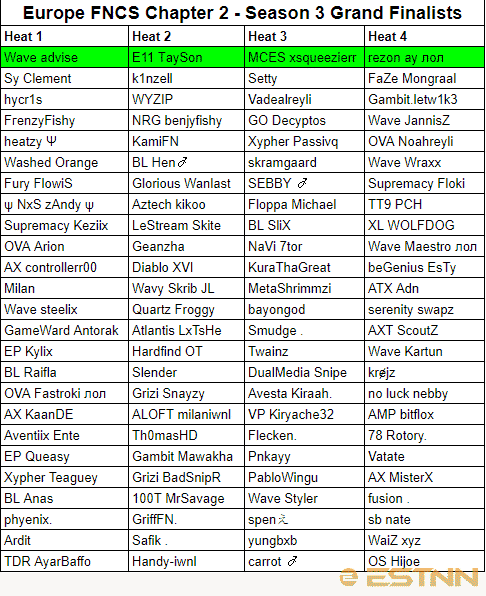 Wave advise, E11 TaySon, MCES Xsweeze and rezon ay non won their respective heats, securing them a place in the Grand Finals. Of those four players, rezon compiled the most impressive performance. The German up-and-comer managed two Victory Royales and a whopping 27 eliminations en route to 74 points in heat four. A win in the Grand Finals would cap off an outstanding Chapter 2 – Season 3 for rezon. E11 TaySon earned two Victory Royales as well and 21 eliminations in heat two.

Several of Europe’s best players were able to reach the Grand Finals, including  BL Anas, EP Queasy, NRG benjyfishy, KamiFN, Atlantis LeTsHe, 100T MrSavage, VP Kiryache42, FaZe Mongraal, Wave JannisZ, XL Wolfiez and OVA Noahyreli. These players will be seeking the Axe of Champions and the $80,000 grand prize tomorrow afternoon. It will be quite the sight to see if a player like benjyfishy can earn his first major tournament victory. 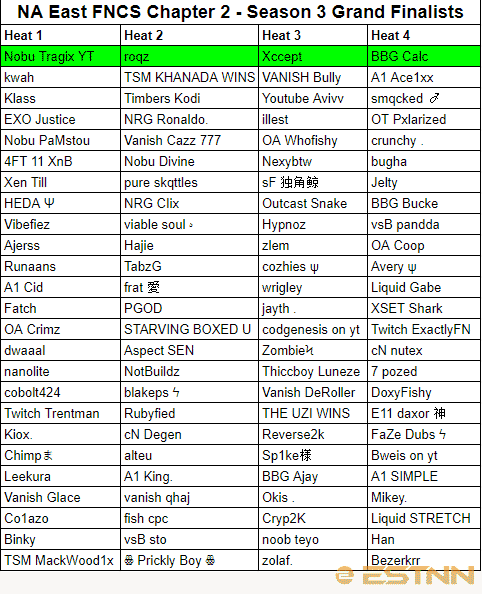 There were some unrecognizable names atop the NA East leaderboards in stage two of the FNCS Chapter 2 – Season 3. Nobu Tragix YT, roqz, Xccept and BBG Calc won heats one through four, respectively. BBG Calc is the most recognizable name, considering that he won the Season X Championship with TSM MackWood and TSM ZexRow. The Built By Gamers competitor achieved 52 points across six games with 16 eliminations and one Victory Royale.

Tragix, roqz and Xccept will join Calc in the Grand Finals, where all four and 96 others will compete for $50,000 and the Axe of Champions. Some other names to find themselves in the finals include Fortnite World Cup Champion Bugha, Liquid STRETCH, TSM Khanada, NRG Ronaldo, Reverse2k, Avery, BBG Bucke, FaZe Dubs and XSET Shark. NA East should provide some fireworks in the Grand Finals. 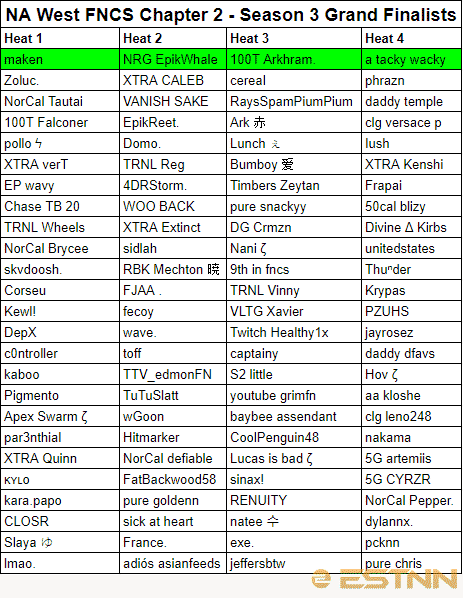 EpikWhale and 100T Arkhram are two names that should be at the top of the leaderboard in the Grand Finals. EpikWhale’s 71 points won him heat two. Arkhram compiled 72 points with 27 eliminations and is seeking his second major victory this month after winning the July DreamHack Online Open. A tacky wacky took first in the final heat 59 points. 100T Falconer, EP wavy, XTRA verT, XTRA Quinn, EpikReet, 4DRStorm, Icy, Frapai and jayrosez will have a solid chance to win tomorrow considering their extensive tournament histories. 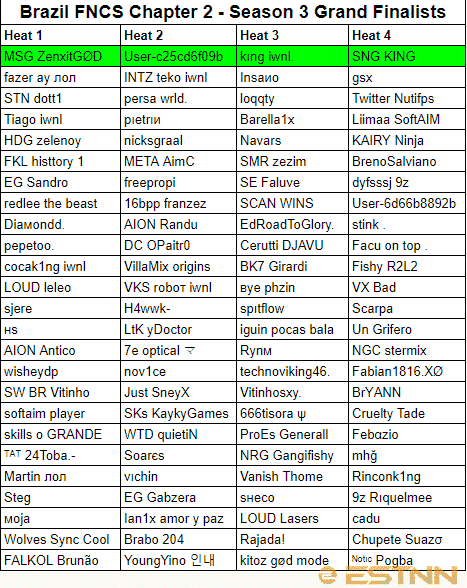 MSG ZenxitGOD, User-c25cd6f09b, king iwnl and SNG KING were the four heat winners for the Brazil region. Some will recognize heat three winner king, who was the standout Argentinian player from the Fortnite World Cup. In heat three, king managed 66 points with an insane 25 eliminations and two Victory Royales.

Heat four produced another player named KING as the winner. Team Singularity’s KING claimed victory back in Qualifier 1 and did more of the same in heat four. He compiled an impressive 31 eliminations and one Victory Royale en route to 76 points. The top 100 players above will be competing for a $20,000 grand prize in the Grand Finals. 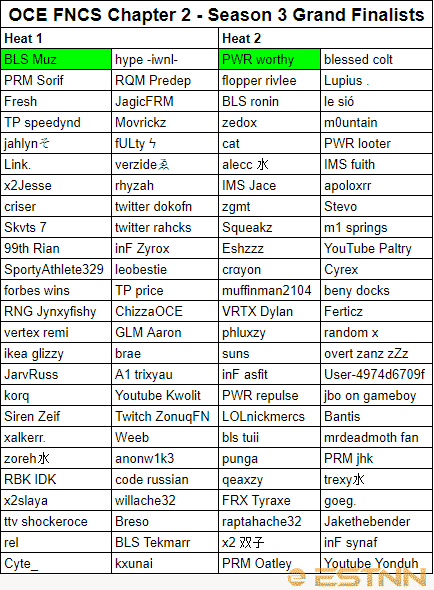 BLS Muz and PWR worthy came out on top of heats one and two, respectively. Muz did so with 69 points and two Victory Royales. Worthy earned 52 points in heat two with one Victory Royale and 15 eliminations. The top 100 players shown above will be competing for the $10,000 first prize. Some notable names include Jynx, RBK volx, x2Jesse, Link, Fresh, x2slaya, Breso, Caryion, PWR repulse and PWR looter. 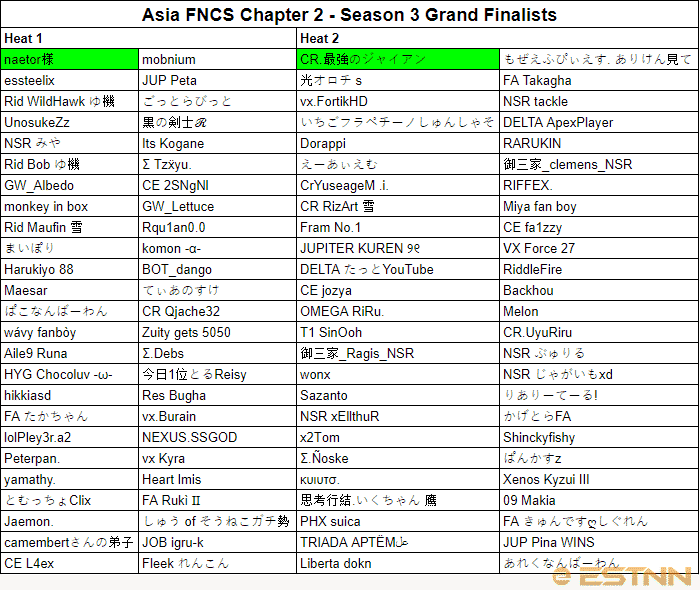 Naetor and CR Strongest Giant took the heat one and heat two victories over the likes of many top Asian players. CR Strongest Giant managed 59 points with 17 eliminations and no Victory Royales. On the other side, naetor finished with 44 points, 13 eliminations and one Victory Royale. These two lead the way heading into the Grand Finals. Other notable players to qualify are Riddle Bob, Rid WildHawk, CR Qjache, GW_Lettuce, Peterpan, CR RizArt and RiddleFire. The Asia region finalists will be competing for a $10,000 grand prize. 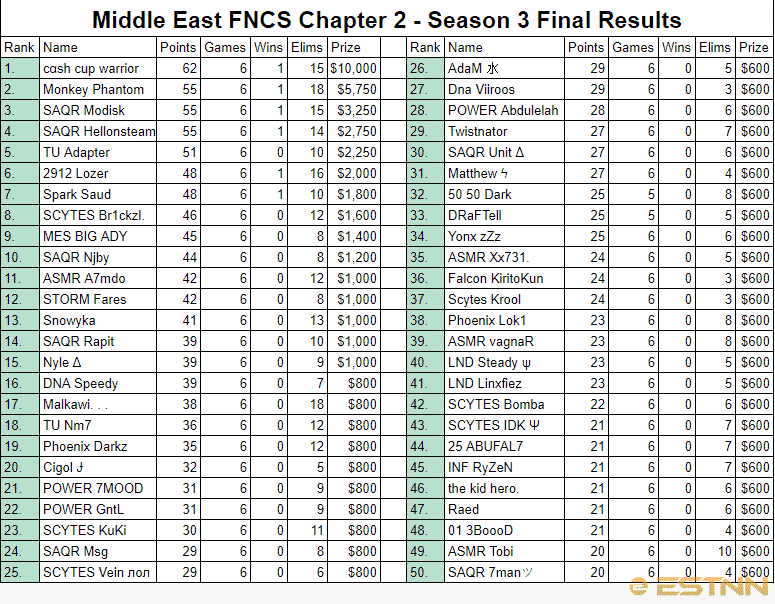 Cash Cup Warrior, better known as ASMR Spy earned 62 points and the first FNCS Championship title in the Middle East region. Across six matches, Spy amassed 62 points with one Victory Royale and 15 eliminations. As a result, he has acquired the in-game Axe of Champions reward as well as $10,000. Monkey Phantom took second place, despite tying with Team SAQR’s Modisk and Hellonsteam with 55 points. Monkey Phantoms 18 eliminations were the difference-maker. Six of the top seven players earned Victory Royales, making the Middle East Finals one of the closes up until the end.

Stay tuned to ESTNN tomorrow as Fortnite crowns yet another seven FNCS Champions! 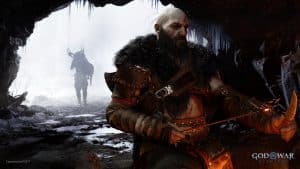