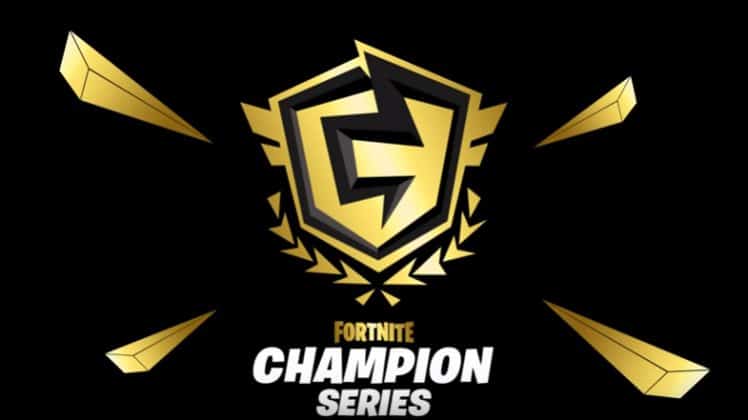 Fortnite’s third Champion Series competition concluded this weekend with a variety of surprising results across all seven competitive regions.

In total, 24 duos competed in the Grand Finals of each region to decide who would walk away with the title of Chapter 2 Season 2 FNCS Champion. Although the prize pool breakdown differed in every area, all duos queued in with the hopes of grabbing cash and cementing their place in Fortnite history. This competition, however, did not go without a wide range of controversies and mishaps. Server performance, first and foremost, plagued almost all 42 matches, as did some drama that unfolded between competitors. Many players did not load into games, and this directly affected the leaderboard.

However, despite these issues, let’s take a look at how the FNCS Grand Finals played out across Europe, NA East, NA West, Oceania, Brazil, Asia and the Middle East.

The Kings of Sweaty Sands, Andilex and Nayte secured their place in Fortnite history and earned the title of Chapter 2 Season 2 Champions out of Europe. This French duo qualified in all four weeks of the Fortnite Champion Series and proceeded to win heat two and the Grand Finals. Not many duos in Fortnite history could rival such an unprecedented effort over five weeks. In the Grand Finals, Andilex and Nayte compiled 28 eliminations and one Victory Royale en route to a total of 53 points. Both players bagged $35K USD for their efforts, and it’s a storybook ending for their chapter in the FNCS.

TruleX and queasy opened up the competition with a game one Victory Royale and maintained consistency throughout, but ultimately fell just short of first place. TCE Rakso and Artor came out of nowhere and finished in third with 47 points, and tournament favorites COOLER aqua and Stompy earned two Victory Royales, taking fourth place overall. 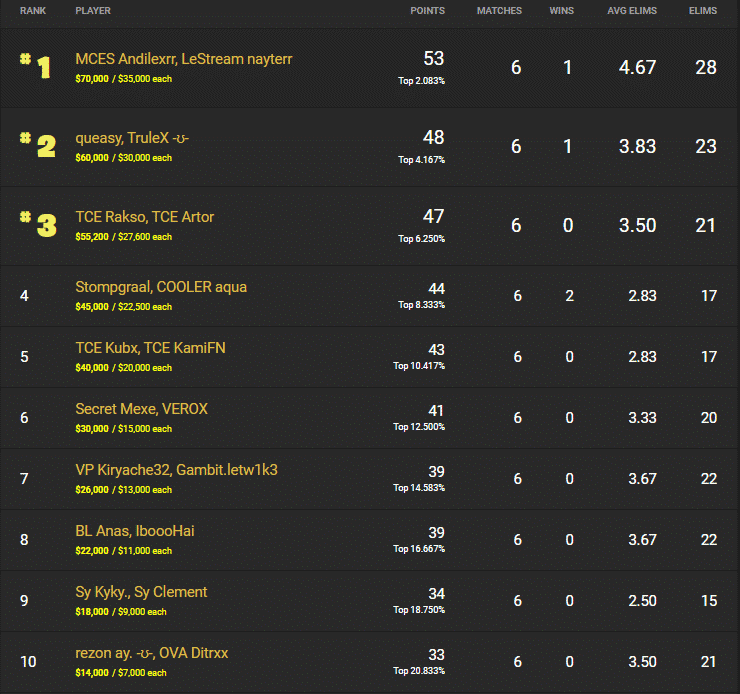 The legendary duo of NRG Zayt and free agent Saf rallied back to the top of competitive Fortnite with their FNCS Chapter 2 Season 2 victory. The leaderboard throughout this tournament flip-flopped multiple times, and game six was the decider, as it should be. Many top duos, including Bugha and Liquid Stretch, FaZe Megga and FaZe Dubs and the emerging pair of Acorn and Vanish Jahq, were just some of the teams in the running.

Ultimately, Zayt and Saf reigned supreme with a match six Victory Royale and eight eliminations to close out the tournament. It’s a picture-perfect ending to the Chapter 2 Season 2 FNCS and is a reminder of just how strong Zayt and Saf are as a team. The previously mentioned FaZe pair of Dubs and Megga remained atop the leaderboard until Zayt and Saf stole the show in the end and finished in second place. Chapter 2 Season 2 standouts RogueShark and Knight completed their FNCS journey with a third-place finish. 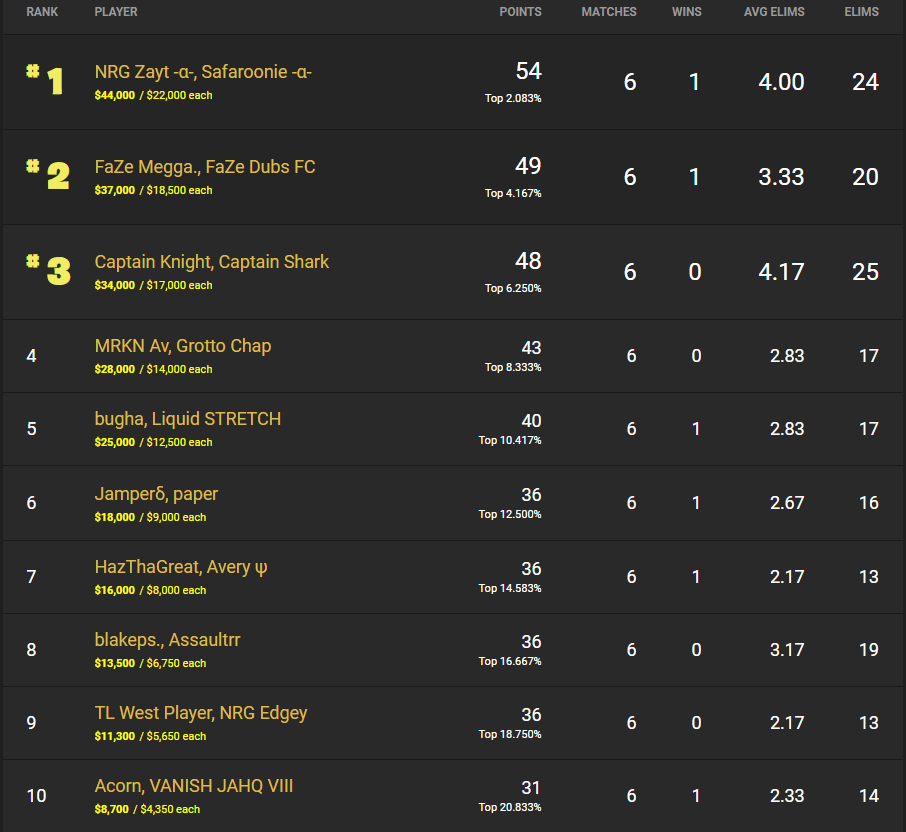 100T rehx and NRG EpikWhale completed an exceptional FNCS endeavor with a Grand Finals victory out of the NA West region. The storyline here is EpikWhale’s ability to switch from a keyboard and mouse to a controller in such a short amount of time. He has been working hard on the new input and now can call himself one of the best controller players and a champion of Fortnite. Let’s not forget about 100T rehx, who has been dominating the NA West region since July of 2019. These two completed a rather dominant performance, amassing 63 points over six matches with two Victory Royales. The top-ten included names like 100T Arkhram, 100T Falconer and Liquid Riversan. 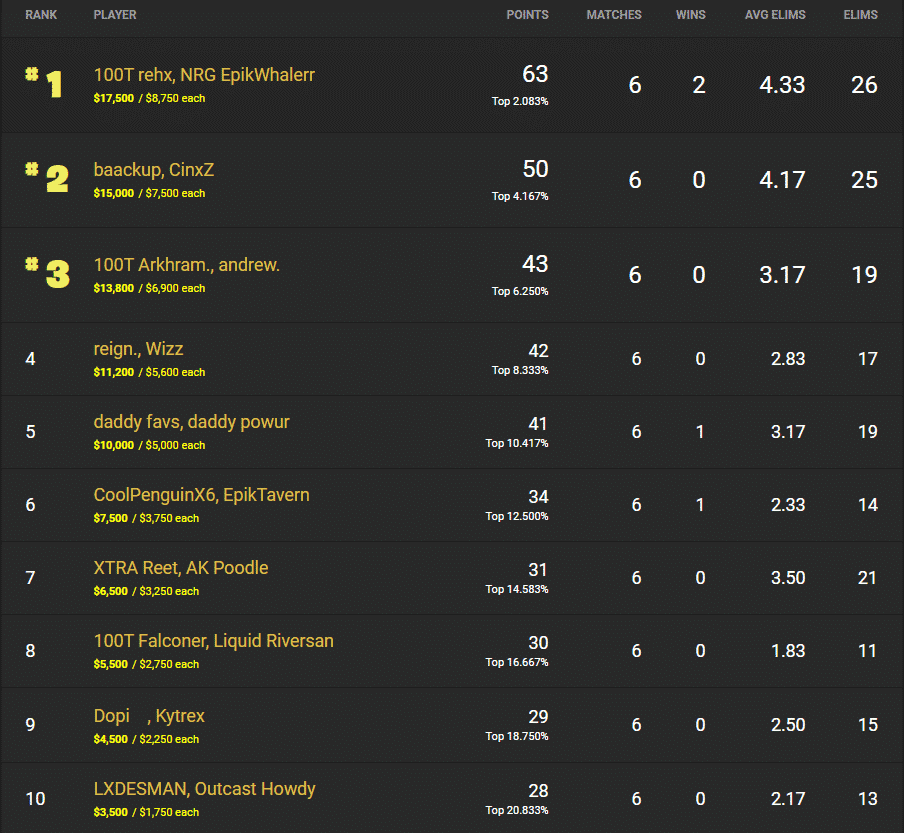 RNG Jynx and kquid clutched up in the final match of OCE Grand Finals to earn the crown of the FNCS Season Champions. As players loaded into the last game, the first place duo of mralex1 and BLS Tuii failed to do so and could only watch as their opponents moved up the leaderboard. Jynx and kquid were behind quite a bit but managed to achieve a Victory Royale with six eliminations, which was enough to win the tournament. Both Jynx and kquid secured $5K USD each in an outstanding Grand Finals showdown.

Goeg and xalke took second place with an average placement of 10.33 over six matches. They managed 19 eliminations and reached 48 points overall, which tied third-place finishers phluxzy and z1 raiku. However, goeg and xalke’s average placement acted as the tie-breaker, which secured them the runner-up position. Unfortunately, mralex1 and BLS Tuii moved down to fourth place as a result of not loading into the final game, but could very well have won the tournament. 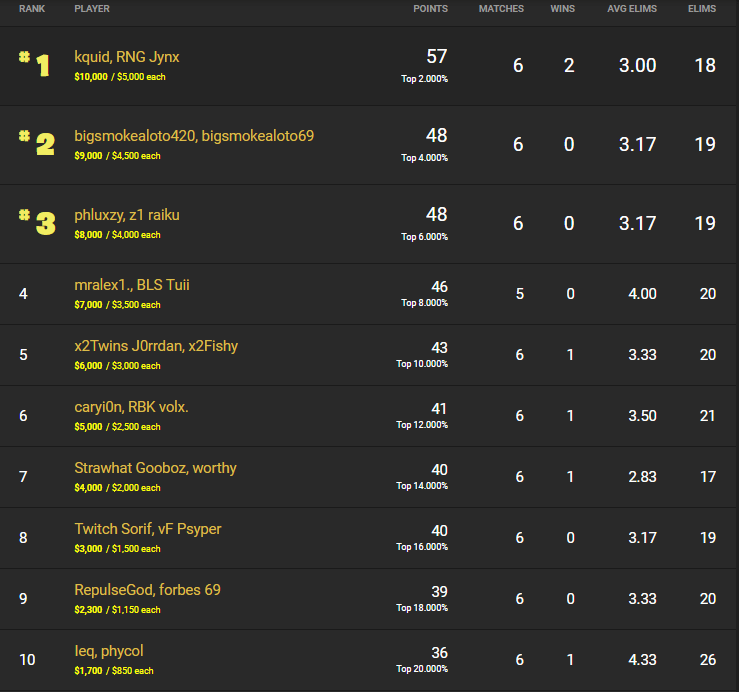 Team Vikings players Pulga and Mojak followed up their four straight FNCS Finals qualifications with a first-place finish in the Brazil Grand Finals. Many players and personalities looked to Pulga and Mojak as the favorites, and they lived up to the hype. Over six matches, Pulga and Mojak put up a whopping 55 points with 28 eliminations. These two Brazilians secured $8.75K USD each for their Grand Finals performance. B4 spitflow and B4 Brunao77 followed in second place with 49 points in total, most of which came from their 27 eliminations. 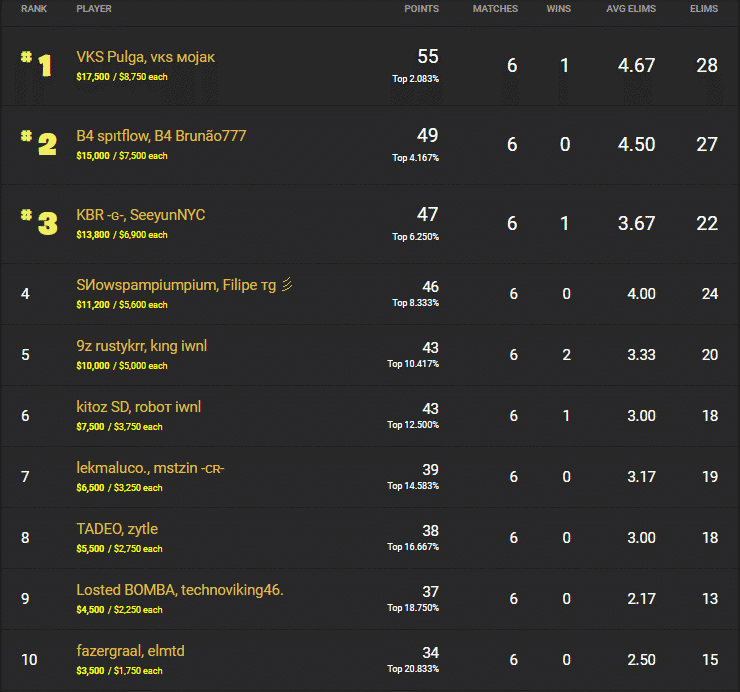 The Asia region saw Fortnite World Cup Solo Finalists FaxFox and Peterpan took the title of Chapter 2 Season 2 Champions. The two performed well throughout the season and pulled out all the stops in the Grand Finals. Overall, FaxFox and Peterpan managed 60 points with a game four Victory Royale and closed out their championship run with a second-place finish in the final match. FaxFox and Peterpan each earned $5K USD and the right to call themselves the best duo in the Asia region. 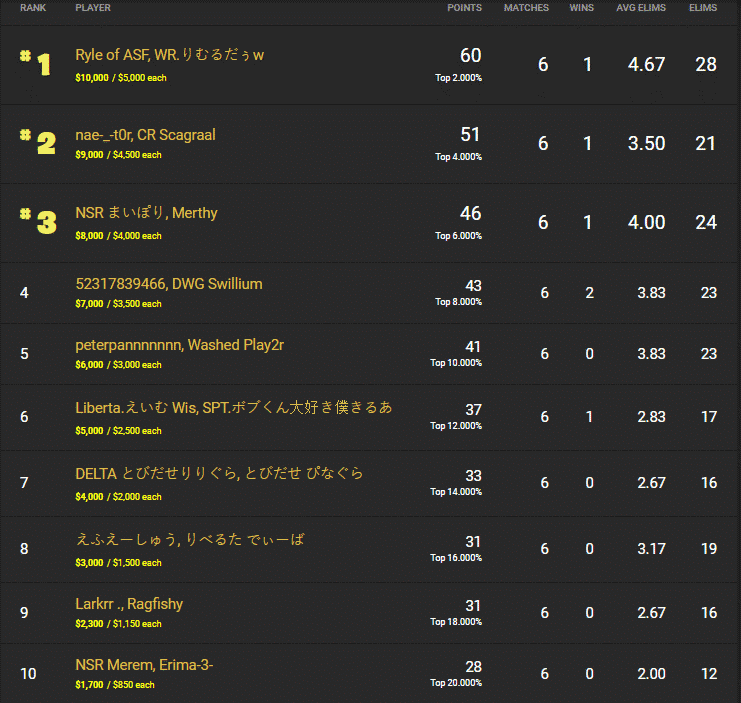 Souriano and unit put on a clinic against their opponents in the Grand Finals and claimed the Middle East FNCS Championship. Their 71 point performance topped all other regions, displaying exactly how ready these two were for the FNCS Finals. The now three-time FNCS finalists managed two Victory Royales along with 29 eliminations. Each player took home $5K USD as a result of their performance and have finally claimed an FNCS Season Championship. 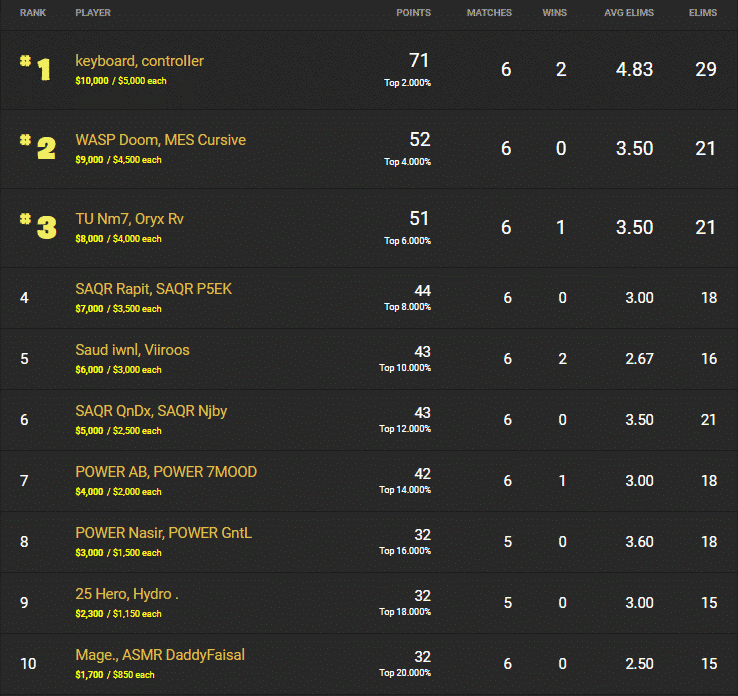 That does it for the Fortnite Champion Series for Chapter 2 Season 2. Congratulations to all participants for reaching the final stage of the FNCS.