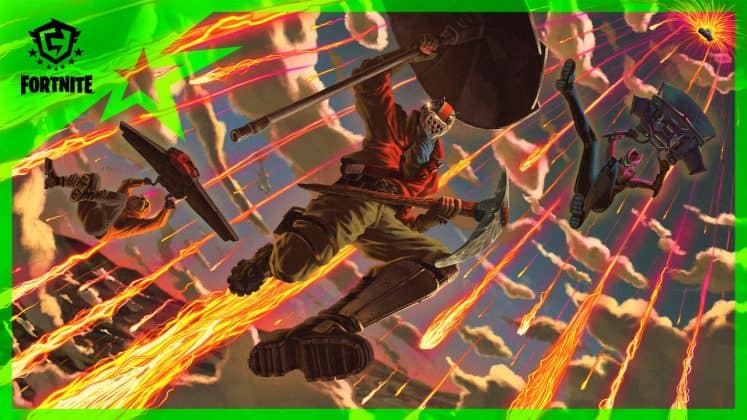 Find out who out-edited and out-aimed the competition on the opening day of Fortnite’s FNCS All-Star Showdown!

The FNCS All-Star Showdown weekend is officially underway. Before getting into the $3M USD Solo Championship, players had the chance to showcase their skills in a set of meticulously designed Creative maps. Epic Games worked in conjunction with some outstanding architects to produce venues where players could flex their editing, aiming and building techniques.

Day one pitted each region’s best editors and aimers against one another in two separate head-to-head battles. The Blueprint Battle led the way, tasking players with completing an edit course faster than their opponent. Then, a different pool of players partook in the Bullseye Bonanza to see who has the superior aim.

Our Bullseye Battle Champions from each region:

We break down how each bracket played out in the European, NA East and NA West regions!

Become Legends player Noahreyli had all the pressure on him. Many consider his mechanics as perhaps the best in the world, and this platform gave him the chance to prove his capability. The German player did just that, riding through the winner’s bracket, where he defeated fam-favorite NRG benjyfishy in a close match.

Here is a recap of all the action for EU’s Blueprint Battle:

The EU Blueprint Battle Champion, @noahreyli! What a comeback down the stretch to take the victory.

Fortnite icon Liquid mitr0 followed a similar path to Noahreyli in the Bullseye Bonanza. He quickly dispatched all his opponents in the loser’s bracket, including long-time teammate FaZe Mongraal. The two would meet once again in the finals, but mitr0 proved too much to handle.

Here is how the bracket played out:

A split-second finish for @mitr0 to take the victory and win the EU Bullseye Bonanza Final! pic.twitter.com/3W0LPprTKq

Moving over to NA East, two players stood out amongst the rest — BBG Khanada and NRG Edgey. While sprite made a formidable run, fate played out in front of our very eyes as Edgey and Khanada would meet in the Grand Finals. It was close, but Edgey reset the bracket and claimed the crown of NA East’s fastest editor over Khanada.

Here is a recap of the NA East Blueprint Battle bracket:

From the Lower Bracket! @Edgeyy is the NAE Blueprint Battle Champion 👑 pic.twitter.com/LdpNJTpK7W

GGs to all my opponents

NA East’s aiming competition produced some surprises. Many believed FaZe Cented to be the favorite, but FS Degen and G2 MackWood would ultimately meet in the finals. Degen made an admirable loser’s bracket run en route to a finals bracket reset. However, a technical issue forced a restart, allowing MackWood to claim victory.

Here is a full rundown of the bracket:

That's a wrap on NAE, but we're headed straight over to NAW now for the Blueprint Battle. pic.twitter.com/gC8Z6iDadK

The competition moved west to end the night, and the mechanics of Chronic Cozz floored all who watched. Despite squaring off against four-time FNCS Champion NRG EpikWhale, Cozz remained calm and put on a clinic, ultimately walking away with the victory.

Here is how the NAW Blueprint Battle played out:

The fastest editor in the West, @cozzlol takes the Blueprint Battle title with a 2:53 run in the Finals!

Up next is the NAW Bullseye Bonanza. pic.twitter.com/BIlzpGykJe

XTRA Kenshi looked rather dominant through the Bullseye Bonanza, taking out outstanding players such as 100T rehx, TRNL Wheels and eventually CLG Symetrical in the finals. Kenshi grabbed himself the aiming crown in the NA West region and $5K USD to boot.

Here is a recap of the entire bracket:

That's a wrap on the NAW Bullseye Bonanza after @kenshifnbr nabs the win! That also concludes the first day of the FNCS All-Star Showdown. Tomorrow we'll continue our live coverage of EU, NAE and NAW with the High Tier Skills Challenge. See you then! pic.twitter.com/5y6pFYQRJk

Congratulations to all our Blueprint Battle Champions!

Epic Games provided all regional Blueprint Battle winners and their fastest time. Rynm7 of the Brazilian region earned a 2:51, and NRG Edgey came close with a 2:52.

The FNCS All-Star Showdown skill challenges continue today with the High Tier. Stay tuned to ESTNN for more results and coverage leading up to the $3M USD Solo Championship!