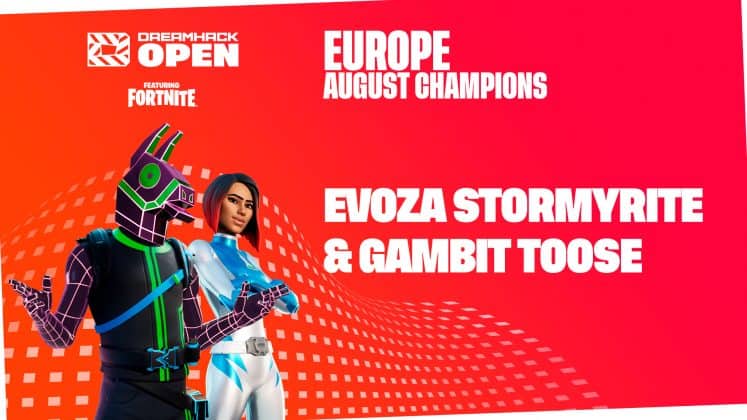 On the heels of an impressive showing from NA East players ENDL8SS Mero and TNG Rise in their home region, the Euros had their moment to shine. The EU DreamHack Open featured a more robust prize pool and perhaps the most challenging path to victory for all who qualified. It’s no secret that the European region includes many of the world’s best players.

Fifty duos made it through the gauntlet of three preliminary heats and the semi-finals to secure their position in the DreamHack Open Finals. The likes of Benjy “NRG benjyfishy” Fish, Martin “100T MrSavage” Foss Andersen, three-time FNCS Champion Tai “Falcon TaySon” Starčič and more earned the right to compete for the $23K USD grand prize. However, only one duo could overcome the field.

Let’s see how the EU DreamHack Open for August played out for the region’s top talents.

Stormyrite and Toose execute a consistent gameplan to claim first

The Russian/Ukrainian tandem of Nikita “EvozA Stormyrite” Kulak and Ilya “Gambit Toose” Chernyshov held on to first despite some charging opponents. Their final match resulted in a three-elimination 15th place finish which put them 30 points clear of second place. It was an impressive six-game effort that included four top-ten placements, a Victory Royale and 26 eliminations.

Stormyrite and Toose could not have asked for a better end to the competition. Their two French adversaries of Team MCES—Zoubiri “BadSniper” Naofel and DKS—were also firmly in the running. However, a 12th place finish in the last game left them short. It was an outstanding performance top to bottom for Stormyrite and Toose, who can now call themselves DreamHack Champs.

🥉3rd duo DH🥉 back to back winning next one @wak1e pic.twitter.com/xm5Nfqt7TN

Blaž “K1nzell” Lešnik of Team Heretics is perhaps the most consistent DreamHack player since the Online Open’s inception in 2020. The Slovenian native has two wins in the DreamHack Open as a solo and a Cash Cup Extra victory to boot. K1nzell and wakie also finished third just four months ago as a duo. It’s been quite the run for both players, but K1nzell, particularly, continues to play exceptionally well in DreamHack.

That concludes the August edition of the DreamHack Online Open featuring Fortnite. The tournament will likely return soon, so stay tuned for more information!