ESTNN recaps everything that unfolded in the Fortnite Chapter 2 Finale.

Fortnite Chapter 2 is over and done with following the send-off event known as “The End.” Epic Games’ latest cinematic season conclusion had everything fans could hope to see. The event confirmed that Dwayne “The Rock” Johnson is in fact part of Fortnite’s world, and has been from the very beginning. Additionally, Fortnite Battle Royale as we know it has changed forever.

Today, ESTNN recaps all the events that unfolded during “The End” as we look ahead to the next Fortnite Chapter 3. Keep in mind, this article contains spoilers. So, if you haven’t watched the event, head over to Fortnite’s YouTube account and experience it for yourself.

Players Load in and Await the Cube Queen’s Wrath 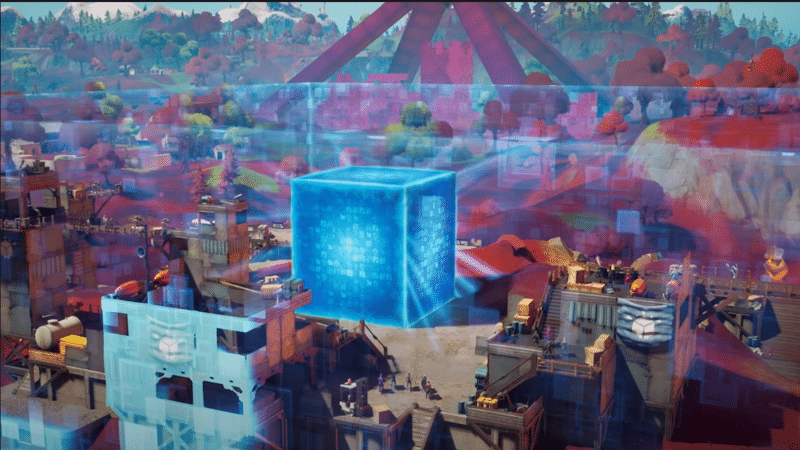 The event opened with players spawning next to the Blue Cube and had to wait an extra 30 minutes to see what Epic Games had in store. During the wait time, players were given weapons to eliminate Cube Monsters as they breached the Cube’s outer shell. The timer soon ticked down to zero and the Cube Queen unleashed chaos. 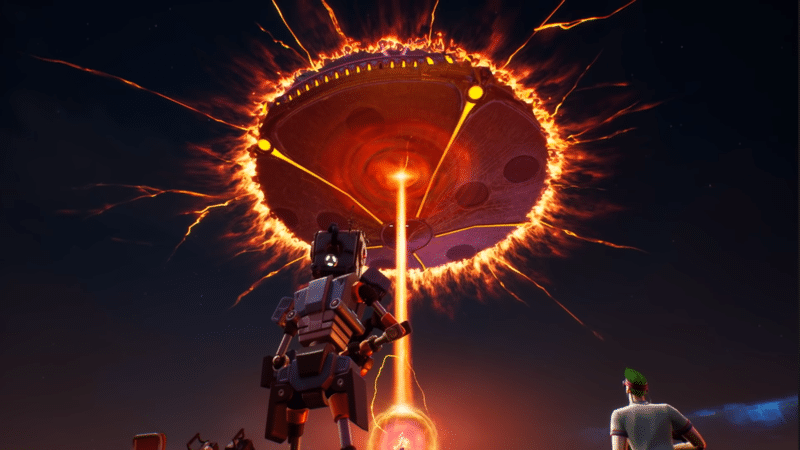 The Cube Queen woke up from her slumber above The Pyramid, shouting, “The Last Reality is at hand.” She drew power from the Cubes beneath The Pyramid and seemingly opened up a portal to another world overhead. UFOs began flying into the atmosphere before the Cube Queen opened the portal further, unveiling massive flying saucers in the sky. Eventually, the Blue Cube’s protective layers shattered, allowing enemy forces to march forward. 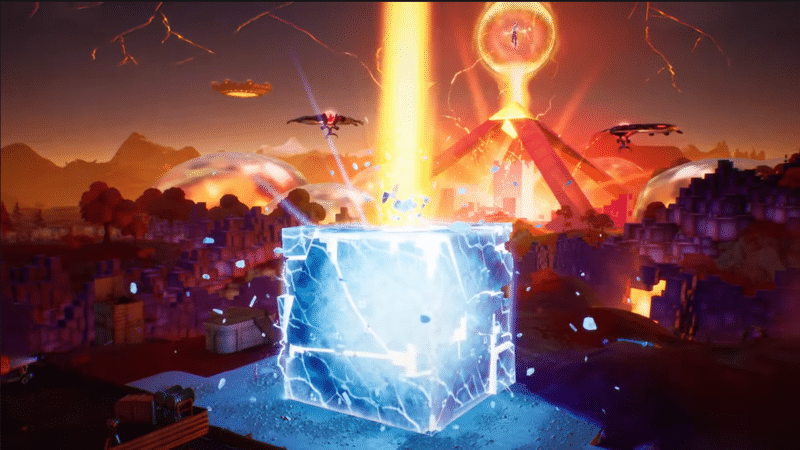 Caretakers began flooding the immediate area, and players had to fight back with an Epic Assault Rifle and Magnum until the flying saucers confiscated them. “There’s no escaping The Last Reality,” spoke The Cube Queen as players retreated to the Blue Cube until a powerful beam shattered it completely.

The Underground IO Base with Slone & Jonesy 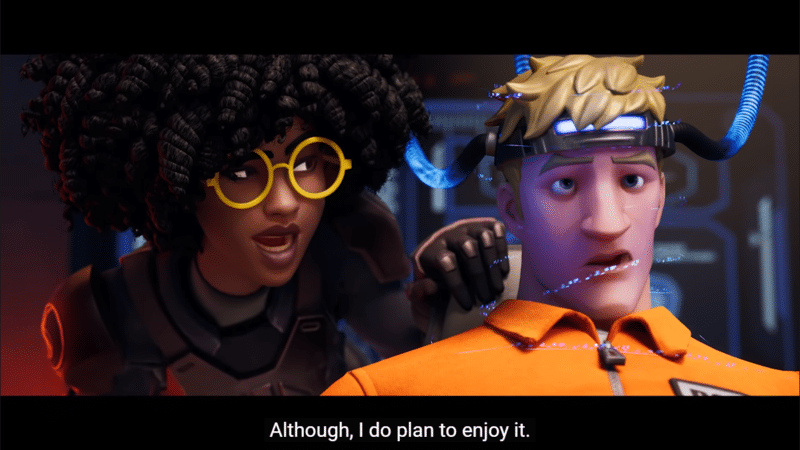 A transition took players to the underground, where a cinematic awaited inside a secret IO Base. Slone appeared at this point along with her IO Guard troops. “Wake him up,” said Slone as she approached a capture Jonesy. Jonesy comes to, Slone panders his need to be a hero. “You know what happens to heroes?” asked Slone. “They live to fight another day?” questioned Jonesy. Slone’s henchmen proceed to turn on a machine hooked into Jonesy.

The Foundation Saves the Day The mysterious figure — The Foundation — breaks into the room to save Jonesy and thwart Slone’s attempt to harm him. “Impossible. I watched you die,” said Slone. “I got better,” replied The Foundation, who removed his mask to reveal his identity as Dwayne “The Rock” Johnson. “You promised me Genō,” said The Foundation to Jonesy after the rescue. Genō is a character Jonesy promised to help The Foundation track down in the Chapter 2 - Season 6 Finale.

The Foundation tasks Jonesy with stopping any IO Guards that enter the room as he prepares to enter the “Other Side.” Jonesy fights off the guards as The Foundation connects two power sources and asks Jonesy to disable the main console’s Gyro system. He pushes a red button, prompting The Foundation to radio a command to initiate phase two. Back above ground, two other members of The Seven — The Scientist and The Visitor — fly in and evacuate players, referred to as “loopers,” through a sealed bunker. The Scientist leads the resistance to the bridge through the crumbling underground base. Everyone eventually reaches the island's epicenter, where The Foundation and Jonesy await. Jonesy reveals to The Foundation that he dropped his weapon from earlier, to which he questions, “Why does she keep making me save you?” It is revealed that the base is underwater, and a Caretaker emerges to break through the glass window surrounding the epicenter. The screen cuts in and out of a black screen while players float rapidly to the surface. Upon reaching the surface, the Island is flipping upside down with the portal still open above and the Cube Queen continuing to wreak havoc. The Chapter 2 Island ultimately flips completely before the screen fades to black. 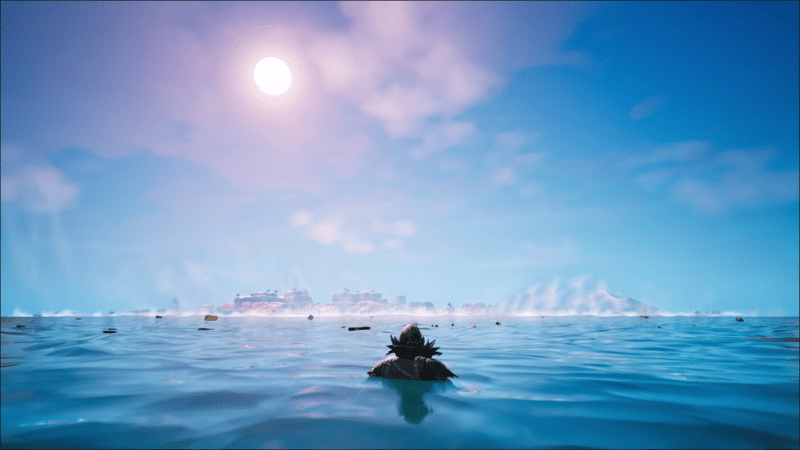 Waiting on the other side was not a black hole as many expected, but a picture of your character model floating in the water. Before long, viral marketing and leaks commenced ahead of Fortnite Chapter 3.

Following the event, Epic Games activated the hashtag #FortniteFlipped. Navigating to the website fliptheisland.com shows a mostly blurred-out Chapter 3 map. Fortnite's official Twitter account confirmed that more of the map would be revealed every time some tweets the #FortniteFlipped hashtag.

FaZe Clan member Nate Hill tweeted a picture, confirming that Spider-Man will appear in Chapter 3 - Season 1. The photo depicts an ad for Fortnite Flipped in New York City with webs surrounding the letters F and O. It's early to say for sure, but it seems Spider-Man is the next significant Fortnite x Marvel crossover.

It's not clear when Epic Games will release Chapter 3, but some rumors point toward 10 AM EST on December 5. The leaks and information will surely continue during downtime in some capacity. Be sure to check back with ESTNN for more details over the next few days!