Fortnite’s newest season is upon us, and it will involve a whole lot of water.

Fortnite’s first event since the Blackout back in October of last year just concluded. It was arguably Fortnite’s most anticipated event to date. Millions of players could not even load into the game and had to watch it a streaming platform of their choosing.

For those who could load in and watch online, the event was a visual spectacle as expected, and many waited to see what would occur. Although we don’t have the number yet, we can safely say that The Device ranks near the top in terms of viewership and attendance.

Fortnite fans the world over wondered how the in-game event would play out. At this point, the rumors seem accurate, and water will play a significant role in Fortnite Chapter 2 Season 3.

YouTube and Twitch personality SypherPK was quick to upload his point of view The Device as it happened earlier today. The event itself lasted roughly ten minutes and gave players and viewers a glimpse at what the rumored water-based theme will look like next season.

To begin, the hatches surrounding The Agency had beacons rise out of each of them. Shortly after, The Agency then exploded, leaving a hole in the middle with a pool of water at the bottom. The Device proceeded to rise from the pool of water and combined power with each of the beacons mentioned earlier.

Each of the beacons, including The Device, then started to combat the storm circle as players entered a low gravity state. The screen eventually went white, transferring players to an office setting before falling back to the event happening at The Agency. Low gravity soon started to disappear as players returned to the ground level of the now decimated Agency. The Device and the storm continued to jockey for the upper hand. During the chaos, a calm suddenly fell over The Agency as players wondered if the event was over.

After a brief moment of calmness, The Device in the middle of The Agency slowly descended back into the pool of water below, but not before teleporting players back to the strange office setting from earlier. A voice stated the following;

Must be connected to the loop, but there’s no way we could have predicted that it would react THIS way. At this--”

Players then returned to The Agency, which was surrounded by water. Sharks, fish and other sea creatures all floated around in the giant water form. The event flashed back to the office setting once again. With the following words coming out of the cut scene;

“And that worked? How long do you think it’ll hold?

Good, good. Everything is, uh, starting to stabilize here. Nothing seems to be--... What the…?”

Fortnite’s default character, Jonsey, walked into the office dressed in a suit, saying to the player, 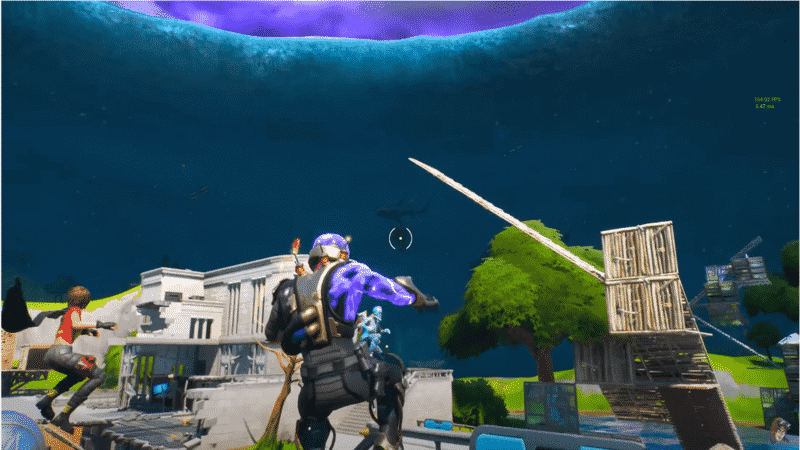 The screen went white again, returning players to the Battle Bus over The Agency, which was still surrounded by water. Upon first inspection, the storm seemed to have merged with the mass of water. Flying, swimming or walking into the water storm forced the player to swim and take damage at the same time while. The Device event effectively finished at this point as players were able to load back into normal game modes.

What does the device mean exactly?

It seems that the rumors and leaks are true. It did not take long for water to come into play during the live event. Although the new season is less than two days away, The Agency is now a shell of its former self, and the water storm combination remains throughout the map. Jonesy’s appearance is puzzling, to say the least, as is the office setting that players visited intermittently throughout.

However, in the grand scheme of the storyline, we can expect a lot of water next season. It also seems that this new water storm will remain for the time being and possibly even into Chapter 2 Season 3. The official Fortnite Twitter account sent out a cryptic tweet following the event.

The Device itself was underwhelming overall and did not provide much context as to what we can expect next season other than water. We can only theorize about what’s ahead, based on the leaks, rumors and the event itself. Nevertheless, Fortnite Chapter 2 Season 3’s water theme will likely come to fruition. We will have to wait until Wednesday to see what new locations, weapons and items are in store for Fortnite: Battle Royale players.

What did you think of The Device? Let us know on Twitter @ESTNN and stay tuned for more updates!