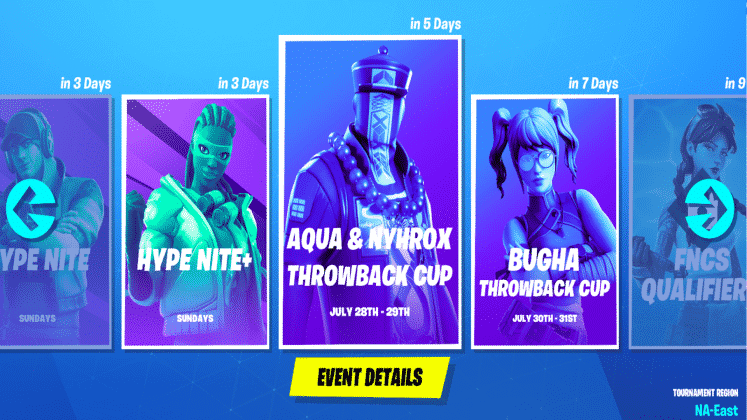 Epic Games moved the European version of this tournament to next month for COOLER aqua, who is recovering from tendinitis. Unfortunately, the competitive Fortnite fandom has to wait for the reunion between the Fortnite World Cup Champions. NA East, NA West, Oceania, Brazil, Middle East and Asia all were able to complete their respective final rounds.

The tournament itself gave viewers an insight into duos in Chapter 2 – Season 3 from a competitive standpoint. Some notable duos qualified for the Grand Finals. Players had only six games to rack up as many points as possible. Let’s take a look at who came out on top of each region in the Aqua and Nhyrox Throwback Cup.

The former NA West duo of Liquid Cented and NRG Edgey shined in the Aqua and Nyhrox Throwback Cup Finals. This dominant duo placed inside the top-ten in all six matches the close out a noteworthy victory. Cented and Edgey combined for 196 points with 21 eliminations and finished with an average placement of 5.17. That sort of consistency breeds results as we have seen in the past. Both players split the $8.75K first prize.

The Sentinels duo of Animal and Aspect took second place with 156 points. They each pocketed just over $2K USD. BBG competitors Bucke and Kreo reunited for the Aqua and Nyhrox Throwback Cup, finishing in third place overall. See the full list of players who finished inside the money below:

100T Arkhram teamed with EP jacob this time around and took a sizable victory in the NA West Aqua and Nyhrox Throwback Cup. This victory marks 100T Arkhram’s second in the same week after winning the DreamHack Online Open featuring Fortnite this past weekend. He teamed up with the exceptional controller player jacob, earned 230 points and $3.5K USD. All in a days work for the young 100 Thieves competitor.

LittleXX and CLG Medusa6 finished in second place with 218 points. XTRA Kenshi and maken rounded out the top three with 194 points. See the full list of players who finished inside the money below:

Oceanic players basil and curse had initially taken first-place for the OCE region. However, they were revealed as cheaters and thus lost their placement in the Grand Finals. As a result, Fresh and Squeaks triumphed with 188 points.

Stay tuned to ESTNN tomorrow and Friday for coverage of the Bugha Throwback Cup!