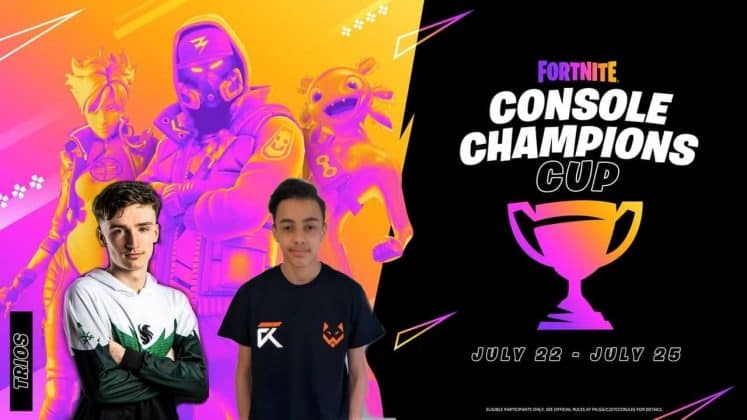 PC players descended on the Console Champion Cup this weekend.

This weekend represented the pinnacle Chapter 2 - Season 7 moment for Fortnite console players. For the second consecutive season, Epic Games dished out a $250K USD prize pool to competitors on Xbox, PlayStation, Switch and more. The console loyalists deserved as much after losing their Fortnite Champion Series (FNCS) many seasons ago. However, with one week remaining until this season’s FNCS, PC players needed to occupy their time.

What ultimately resulted was an invasion of non-console players. Many top names across all regions purchased a PS5 or Xbox One X for this one occasion. Some recognizable players, including former FNCS Champions Alexandre “Falcon Andilex” Christophe, Jaden “XL Wolfiez” Ashman, Malachi “ENDL8SS Reverse2k” Greiner and more, planned to spoil the console party. Let’s see how the three major regions went down.

French player Falcon Andilex and console teammates Grizi Laizen and Rz Destru completed their second straight Console Champions Cup victory, and it wasn’t close. The three players finished no lower than eighth in rounds two through four, improving immensely from round to round. It was almost a foregone conclusion that the Andilex, Laizen and Destru had the Console Cup secured before the first match started. The French trio completed their impressive run with one Victory Royale, 48 eliminations and 224 points. Each player walked away with $7.2K USD without much resistance.

A trio of European PC players finished second in their console debut. XL Wolfiez, solo veno and LootBoyXsterioz gave the Frenchmen a run for their money but ultimately fell short. Their six-match effort included one Victory Royale, 34 eliminations and 197 points. Wolfiez, who has a track record of runner-up finishes, added another to his list, but $5.5K USD each is not a bad consolation prize.

Rounding out the top three was another trio of PC players. FNCS Chapter 2 - Season 6 Finalists OVA Night and hycr1s joined coolestcarrot in securing some cash on an unfamiliar landscape. It’s clear that this is a PC player's world, and everyone is only living in it. Out of the top nine finishers, just two are console players for the EU region. We can expect a similar result next season.

MORE FROM ESTNN
Fortnite: How To Get Slone's Mythic Burst Assault Rifle In Chapter 2 - Season 8

While the PC players dominated Europe, a trio of console talents claimed first in the NA East region. YTDropz, Zpxy and TNG Tkay defended their platforms honor with a stellar performance. The three players finished third, first and fourth in the three sessions leading up to the finals. After reaching the last round, Dropz, Zpxy and Tkay let their eliminations do the talking. They earned 43 eliminations across six matches and ended with 220 points. In addition to representing the console community, the trio secured the $9.6K USD first prize.

The all-console team of Jbcao, Cartoon 117 and arri xc also represented the often underrated scene with a second-place finish. Like Tkay and company, this trio remained consistent throughout the weekend. Their placements heading into the finals included a fourth, third and seventh. Jbcao, Cartoon and arri managed a 50% win rate in the final round, ultimately putting them at 214 points. Despite a last game Victory Royale, the three players came up just short and collected $7.2K USD.

Controller standout Ajerss joined nut and Chronic Jays—two former console kings—in rounding out the top three. The first PC-only crew on our list managed 186 points in eight matches. Their eliminations left a lot to be desired, but regardless, Ajerss, nut and Jays earned a Victory Royale in the finals and claimed $2K USD each. That’s certainly not bad for a team that predominantly plays on PC.

NA West has the privilege of ending the three major regions into the late hours of the night. Fortunately, it was an outstanding display of competitive Fortnite. Two trios were in a position to win, and a second-place finish in the final match leapfrogged XTRA Snacky, PowurKG and cmx buzzo into the winner’s circle. This PC/console hybrid team enjoyed an impressive 5.5 average placement to accompany 28 eliminations. They also managed two Victory Royales, one of which occurred in the penultimate game.

That concludes ESTNN’s coverage of the second Console Champions Cup. We expect to see another next season, but stick with us throughout FNCS Chapter 2 - Season 7, which begins this weekend.