You just want to go ham, swing that axe and make your healer wonder why they are here in the first place? We got you.

While it is true that the average Warrior player needs a Grade 2 Tincture of Intelligence to communicate anything beyond 'Oh Inner Release is up again'... They are probably the easiest tank to learn and master. And probably also the easiest Job in the entire game.

I hate Warriors. 'Why?' I hear you ask? Consider that we are four expansions deep and I have yet to see them getting the short end of the stick. And as a former Paladin, now Dark Knight main that makes me feel all kinds of emotions. But even I have to admit... self-sustain that puts many a healer to shame, that can solo endgame raid bosses. Being pretty much immortal in solo content, while also having a fun rotation? That tempts even the most weathered veteran to go down the dark path... The path of the blue and green DPS.

Am I salty? Yes. I've been salty since playing a Paladin during Living Liquid Savage, thanks for asking. But now, far removed from that traumatizing event. With more hours into Warrior than I'm comfortable to admit. Even I have to admit.. its pretty good. So allow me to impart this forbidden knowledge upon you.
— Lahftel, Recovering Heavensward Raider

BUT FIRST! The Lore!

Yeah, you thought you'd get away without a little history lesson didn't you? Warrior is one of the classic Final Fantasy Job's, appearing all the way back in the original Final Fantasy back in 1987. And it's been a staple of the franchise ever since.

In Final Fantasy XIV, they are axe swinging monstrosities and also happen to be the poster child of A Realm Reborn.

Warrior lore itself, is a little tricky though. They are described using a technique called 'the Inner Beast' to harvest... we're not sure actually. You can imagine them as a sort of berserker, always on the cusp of being driven insane by blood lust. Of course you'll get all the juicy story all around it by just following the Warrior job quest starting at level 30. From Marauder to Warrior

Marauder is one of Final Fantasy XIV's base classes which has you starting out in the city of Limsa Lominsa. While you'll have to deal with pirates and their troubles, you'll also learn the way of the axe and being a tank. Of course, should you have doubts about that, you can also pick up another class as you progress through the class quests. As always, do your class quests. They get you gear and skills and are needed to unlock the Warrior job.

How to Tank as Warrior

We have a general guide to tanking in Final Fantasy XIV here. But it can't hurt going over the basics right?

Your most essential tool is the skill Defiance, you'll get access to it after reaching level 10. Whenever you're in group content you should have that activated. You pull multiple enemies at a time by using the skill Overpower; an AoE attack.

Later you'll get Mythril Tempest which is just your combo ability. You want to use those whenever there is more than one enemy for you to attack. Use Tomahawk, your ranged attack to pick up any enemies you didn't get or pull to them from far away. You can check your enmity or aggro on the enemy list. In an ideal case those symbols next to the enemy names should always be red. That mean's that you're their top priority.

Once you have your pull, make sure to group them up nicely so everyone else can hit the pull with their AoE attacks. You should also, always face them away from the party and dodge as many ground targeting attacks as possible. Depending on how confident you are, you can either pull one enemy group at the time or pull wall to wall in dungeons. Which is usually two to three groups of enemies. Of course your healer has to keep up with you on that so be communicative, but if you use your damage mitigation it should be fine.

Single target encounters work just a little differently. You just do your regular rotation and try to keep the boss steady in the middle of the arena. Facing away from the party and ideally facing north. Now different bosses require different strategies but this is what you should always default to. 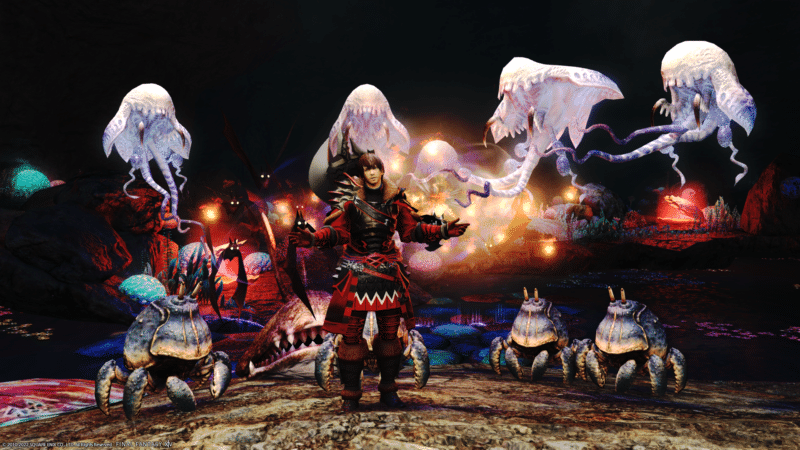 As a warrior, you have it pretty easy when it comes to damage mitigation. Most of your skills don't just prevent damage, they also heal you up. Especially once you get Raw Intuition/Bloodwhetting and Nascent Flash. Those two are on a 25 second cooldown and there is no reason not to use them all the time. The first one regenerates health for every Weaponskill landed, while applying a damage debuff and a shield to a party member. Bloodwhetting is just a straight upgrade to Raw Intuition and will replace it. With both of them sharing a 25 second cooldown, it's one of the best defensive cooldowns in the game.

When fighting multiple enemies, circle through all your cooldowns while never stacking them on top of each other. Best start out with Arms Length on pull, or whenever it comes up paired with a Rampart. Once those two time out you can go for the skill Vengeance. Not only does it reduce damage significantly, you'll also deal some damage back. Then go either for Reprisal, or if your health is below the 80% mark you can go for Thrill of Battle instead. That one will heal 20% of your total health, while also increasing your total health by 20% for a time. Don't waste it if you are topped up though.

During all of that, keep using Raw Intuition/Bloodwhetting whenever it comes off cooldown. Its free mitigation, free healing and comes off cooldown rather quickly. And then there is Equilibrium, a chunky heal every 60 seconds that also applies a regen effect for 15 seconds. Sprinkle that one in should you run out of cooldowns or if you get hit especially hard.

In boss fights/raids/trials/ect. you should use try using your cooldowns whenever you're about to be hit by a single target attack. Rampart and Vengeance should do the job for that, especially if you keep using Raw Intuition/Bloodwhetting on yourself, or Nascent Flash on someone else. Did you know that the critical hit you get from Inner Release affects that heal? And did you know that Thrill of Battles increased healing affects Storm Paths healing, Equilibrium's healing and Shake it Off's healing? Did you know that Equilibrium's heal over time effect can crit? Yep, you are the healer now.

After you've eaten heavy damage, use either Thrill of Battle or Equilibrium to heal up. Or if you couldn't use your two defensive cooldowns. Use Reprisal to decrease party wide damage. Or use Shake it Off to shield your party and heal them up before a party wide attack. Ideally pair the two, or coordinate with your co-tank's and their partywide cooldowns to do the same. Oh and there is also Holmgang, possibly the best cooldown in the game. Use this to stay alive even if when you should be dead, since your HP cant drop below 1 until the effect times out in 10 seconds. Better yet, should the target be out of reach, you can just use it on yourself to reap the benefits. On the Warrior, if there are 3 or more targets available you can just keep spamming Overpower + Mythril Tempest on pull in dungeons. Once you get situated, use Orogeny (available at level 86) and keep using it on cooldown. Weave Inner Release and Infuriate within the same global cool down and use Chaotic Cyclone. Pop another Infuriate, another Chaotic Cyclone and then keep using Decimate three times. You should have enough time after to use Primal Rend. Then you can go back to using Overpower and Mythril Tempest, use Decimate if your meter goes above 50 and pop Infuriate once it comes back up.

On single target, we have our three part combo with two possible enders. Storm's Path and Storm's Eye, the former applies a nice little heal while the latter applies a 30 second buff to our DPS. We want to keep that buff up at all times. What makes Warrior unique is its flexibility, as long as you keep the Storms Eye buff up, use Upheaval on cooldown while keeping at least one Infuriate and Inner Release rolling. And you should be good. But lets go over a single target opener just in case.

We start out with a Tomahawk, pop Infuriate while running towards the boss. If you are the main tank you'll have to position then, else you'll just run to your position. We'll then proceed with the Storm's Eye combo, once the buff is up we'll use Inner Chaos. After, use Upheaval, Inner Release, then Primal Rend followed by 3 Fell Cleaves. Depending on how confident you are, weave Onslaught between those Fell Cleaves for extra damage. It's however recommended to keep at least one of those, in case you need to get back on the boss quick. Next we pop the second Infuriate, followed by Inner Chaos. Then we proceed with our Storm's Path combo. By now another Infuriate should come up again, so we'll use that, then Inner Chaos again. Follow up with another Storm's Eye Combo with Upheaval weaved in between.

Now it just becomes a game of making sure your meter is never full, for that weave Fell Cleave. Make sure to keep that Storm's Eye buff up, but never over cap it. And use Upheavel, Inner Release and Infuriate whenever they come off cooldown. Some cool stuff about Warrior

So, Warrior is basically the third healer of the party. You might only be able to use Nascent Flash every 25 seconds, but it and Shake It Off are really useful. Not only that, healers usually barely have to worry about you. And can focus on making sure everyone else has their ouchies cared for, and dish out the pain. BUT! Did you know that Vengeance also deals a small amount of damage equal to other damage over time effects every time you get hit? This is especially useful when being being auto attacked by the boss. So, if you don't plan to use it for the next 120 seconds and or feel confident you can mitigate damage within that timeframe otherwise; Just pop it. Prevented and dealt damage. It's still better than having it sit on your hotbar, unattended and unloved.

So what did we learn about Warrior today? It's stupid, that's what it is. Big self heals, big damage, easy to adjust to any situation and a survival expert. Warrior is really that guy who watched too much Man vs. Wild. Healers hate you, other tanks want to be you and DPS don't understand what those big words like 'damage-mitigation' or 'self-sustain' actually means. Feels great to be the developers favourite child. Maybe next expansion Warrior won't be broken right out of the gate. (Who am I kidding, by then they probably add a feature that lets Warrior's solo Ultimates.)

For more on Final Fantasy XIV, visit us here on ESTNN