Here you'll learn how to be that knight in shining armor your healer doesn't have to worry about.

The Paladin or PLD for short is one of Final Fantasy's classic jobs. Its big acclaim to fame is not only being Cecil's job, the protagonist of Final Fantasy IV, but now its also the poster child of Final Fantasy XIV Endwalker. But honestly, who in seven hells plays Paladin? It's so boring, it's just a dude with a sword and shield! Have you seen Warrior or Gunbreaker? Wait, they can heal themselves and their party members? Have great overall utility as an off-tank and sustainability? Have you seen Blade of Faith, Blade of Truth, and Blade of Valor go off?! People... I think I've found my new main.

So yeah, the Paladin. They fall into that 'careful who you call ugly in high school' category of jobs and are probably the closest Final Fantasy XIV has to a traditional tank. Your healers will love you, or be jealous because of your big heal. And while you might be slacking just a little bit in damage. You are the Swiss army knife of tanks. Especially for progression, it's always great to have someone who picks up the pieces and prevents a wipe. Here you'll be learning all about what it means to be that Paladin that has their party wipe in dungeon. Only to have them watch for 5 more minutes while you solo the last boss.

What about the Lore though?

Don't worry, we have you avid Role-players covered. Paladins come in two flavors; The free Paladin's only bound by duty to their creed. They wander about and do knight stuff. You know, help the innocent and never demand a reward. The clean-cut superheroes of the world of Final Fantasy XIV. On the other hand, there are the Sultansworn. Loyal servants to the sultanate of Ul'dah and protectors of the sultana Nanamo Ul Namo. You'll get more familiar with their ways once you start the Paladin Job Quests at level 30. But first on how to get there.

From Gladiator to Paladin

Lucky for you, Gladiator is one of Final Fantasy XIV's starting classes. That also means you'll start your adventure in Ul'dah and you lock yourself into being a tank. Don't worry, you can start looking for other classes once you unlock them after a few of the class quests. As always it is integral for you to do those and the later unlocked job quests along the main story scenario. Those will not only reward you with new gear but also new abilities. Once you finish up your endeavor with the Gladiator guild, you'll be offered to join the Paladins. This will reward you with the jobstone and even more abilities to toy around with. 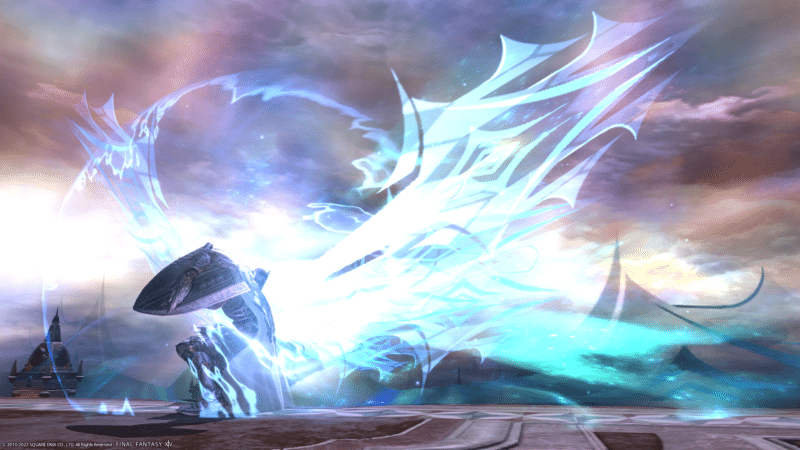 How to Tank as Paladin

We have a general guide to tanking in Final Fantasy XIV here. But it can't hurt to go over the basics right? Your most essential tool is the skill Iron Will, which you'll get after reaching level 10. Whenever you are in group content you should have that activated. You do a pull with multiple enemies by using the skill Total Eclipse, an AoE attack that hits multiple enemies. Later you'll get Prominence which is just your combo ability for that. You want to use those whenever there is more than one enemy for you to attack.

Use Shield Lob, your ranged attack to pick up any enemies you didn't get or pull them from far away. You can check your enmity or aggro on the enemy list. In an ideal case, those symbols next to the enemy names should always be red. That mean's that you are their top priority right now.

Once you have your pull, make sure to group them up nicely so everyone else can hit the pull with their AoE attacks. You should also, always face them away from the party and dodge as many ground-targeting attacks as possible. Depending on how confident you are, you can either pull one enemy group at a time or pull wall-to-wall in dungeons. Which is usually two to three groups of enemies. Of course, your healer has to keep up with you on that, but if you use your damage mitigation it should be fine.

Single-target encounters work just a little differently. You just do your regular rotation and try to keep the boss steady in the middle of the arena. Facing away from the party and ideally facing north. Now different bosses require different strategies but this is what you should always default to. 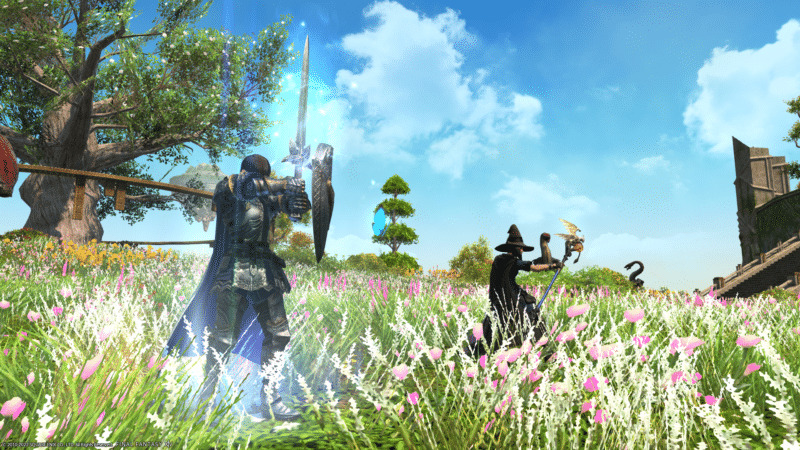 As a Paladin, you have an array of tools to keep damage far away from your health bar. In addition to your shield of course which will do a decent amount of legwork for physical damage. But don't forget that you also get a powerful single-target heal. Use that whenever you find your party in a pickle.

In situations where you fight multiple enemies, you should circle through Rampart, Sentinel, Bulwark, Reprisal, and Divine Veil in any order. Just make sure they don't overlap with each other. Use Arm's Length as soon as your pull is situated, that will apply a slow status effect to them for 15 seconds. During all of that, you should use Sheltron/Holy Sheltron every time you can to give your healer breathing room to do damage instead. Use Hallowed Ground only as a last resort, it will make you invincible in most situations for 10 seconds.

In boss fights/raids/trials/etc. you should use Rampart, Bulwark, or Sentinel on any kind of single-target cast aimed at you. Use them literately but don't waste them on bosses' auto-target attacks either. Use Sheltron/Holy Sheltron as often as you can if you are the main tank or Intervention on the other tank to substitute. Cover is great to help someone out in a pinch and take the damage for them. For big raid-wide damage use Reprisal or Divine Veil.

And if there is a stacking mechanic, use Passage of Arms. For that skill, you need to stand in front of your party, and make sure they stand between the skill effect's wings for damage mitigation. Hallowed Ground is normally used in sticky situations. But with some coordination and confidence, you can use to ignore certain tank-buster mechanics. 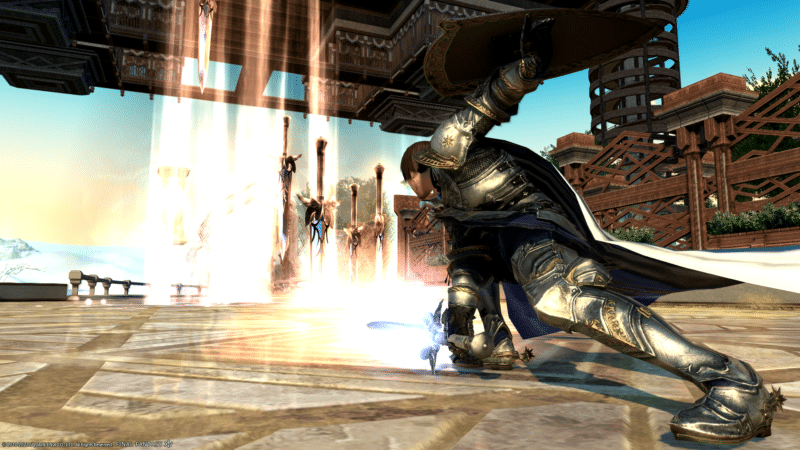 Fighting groups is as straightforward as it gets. You simply use Total Eclipse and Prominence and finish the combo with Holy Circle to make use of that Divine Might buff. Then you weave your off-global cooldowns like Circle of Scorn and Spirits Within/Expiacion between those skills. You should also make sure to use your buff Fight or Flight whenever it comes off cooldown to maximize your damage.

Don't forget that you also have your Requiescat combo which deals AoE damage. Since Requiescat is on a 60-second cooldown timer, there is absolutely no reason to ignore it. Then just cast Confiteor and continue with Blade of Faith, Blade of Truth and finish off with Blade of Valor.

For single-target encounters, you obviously use your single-target combo. Don't forget the always-be-casting mantra either. Till level 54 you'll only have to worry about your three skill combo: Fast Blade, Riot Blade, and Rage of Halone*(*Royal Authority from level 60 onwards). At level 54 you'll get Goring Blade, which deals damage of 700 potency and comes up every 60 seconds. It is important that you always use and line up Goring Blade with your Fight or Flight damage buff to get all the damage out of it.

Then you have all your off-global cooldowns. Circle of Scorn applies a damage-over-time effect and Expiacion/ Spirits Within just deals flat damage and Intervene deals some damage and also offers some mobility. Since all of them are on a relatively short cooldown timer you want to weave them as soon as they come up. They're especially great for weaving within your burst phase.

But let's talk about your rotation and your opener. If you can, try casting Holy Spirit once 2 seconds before to get out a little extra damage and continue with your regular melee combo. Fast Blade, Riot Blade then Royal Authority. Now you weave Fight or Flight and Requiescat and use Goring Blade, weave Circle of Scorn, and Expiacion before you use Confiteor to head into the Blade of Valor combo. After that cast Holy Spirit and use Atonement three times and all your opener is done.

From here on, you use everything as it comes up just make sure all our cooldowns are ready for the next Fight of Flight buff window which shouldn't be a problem. In between this your just use your basic Royal Authority combo and top it off with Holy Spirit and Atonement. 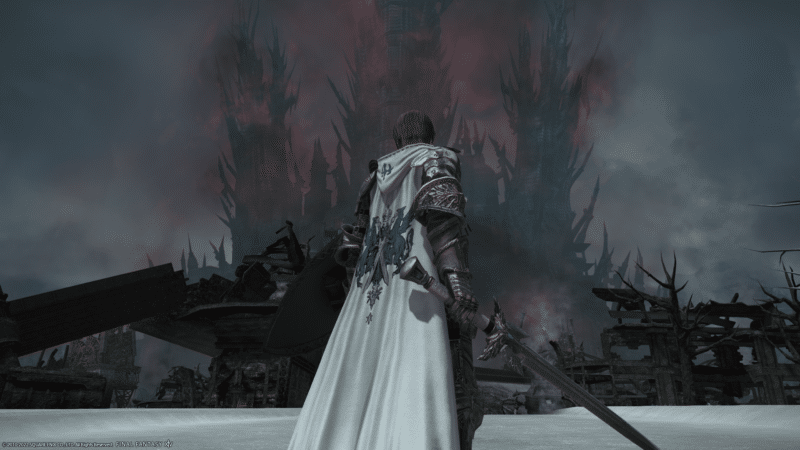 Other stuff about Paladin

Here are some of the hot tips YoshiP doesn't want you to know about. Holy Spirit is generally stronger than Shield Lob, outside of Shield Lob's enmity generation. The only thing you'll have to potentially deal with is slide casting to optimize movement. But keep this in mind whenever you have to disconnect from the boss to solve a mechanic. Doesn't happen often but it happens.

While the typical healer in FFXIV gets a little bit angry whenever the Paladin starts healing, there is reason to help healing to recover something nasty. Clemency doesn't see much use outside of solo play and deep dungeon despair. But it can save the occasional raid if used properly. Just make sure to communicate with your healers to avoid overhealing.

Cover is a really cool, but also really situational ability. While you don't see it get much use in Savage encounters, as a Paladin and especially as the off-tank in normal raids and trials you can definitely use it to save your healers and DPS from an untimely demise. Pairing it with a defensive cooldown is generally a good idea and using Cover to save someone is definitely going to put you into consideration for a commendation.

If you feel confident about your uptime, weave Intervene for extra damage. If you don't feel confident in a fight, however. Make sure to always have at least one charge in-store to quickly get back to the boss again.

And that's how you play Paladin. A very versatile Job with lots of utility. The Swiss army knife of tanks that you don't wanna miss out on while progressing in a fight or solo content. While it's not as busy as other tanks, it's clean-cut and offers lots of defensive options. You also get to spin your sword around and with the Heroic Spirit Shield glamoured, it looks like you're blocking attacks with just your forearms. That's pretty cool.

For everything else Final Fantasy XIV related, visit us here at ESTNN