After a successful run in Europe and NA, ESL are bringing mobile esports on to the global stage.

ESL, undoubtedly the world’s biggest esports company, have just announced they’re taking their Mobile Open series worldwide. The ESL Mobile will encompass not just North America, Europe, but the Middle East-North Africa (MENA) and the Asia-Pacific region. Making it the first truly global tournament in the mobile circuit. It's especially good timing, considering the forthcoming global release of League of Legends: Wild Rift. And it once again shows that ESL have their finger on the pulse of the esports industry.

From Dota 2 to CS:GO, ESL has always played a huge role in building and growing the competitive esports scene. With the growing popularity of mobile gaming, it’s no surprise to see them enter this space in a bold and ground-breaking way.

The new mobile esports ecosystem is set to provide millions of gamers an opportunity to play some of the most popular mobile titles competitively. They’ve partnered with top publishers and developers including; Riot, Tencent, Gameloft and Supercell to offer players and viewers alike a chance to test their mettle in the ESL Mobile Challenge.

The global season kicks off on April 12 with the ESL Mobile Spring 2021. Each season will consist of two competitive tiers, beginning with the ESL Mobile Open. Players of all skill-levels are invited to compete in titles like PUBG Mobile, Wild Rift and Clash of Clans, just to name a few. 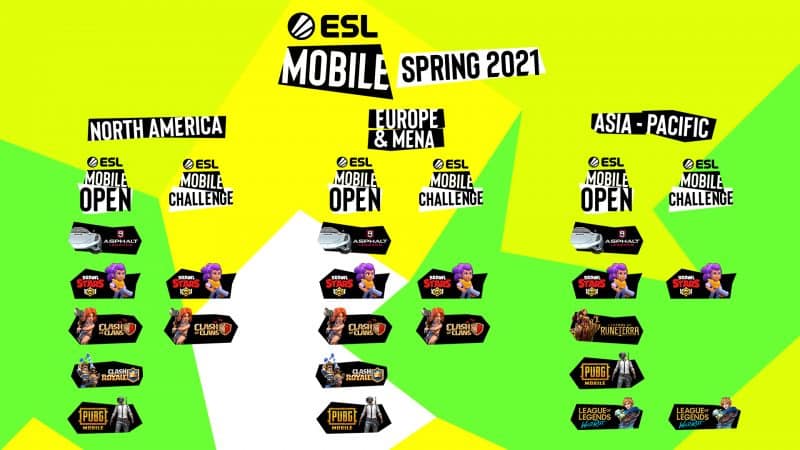 And they’re not just competing for fun either. Players will work their way through the two ladder phases, players can earn a chance at one of the two play-in opportunities for a spot in the all-new ESL Mobile Challenge. Plus a chance at a slice of the $650,000 USD prize pool.

Start in Open, grow to Pro

The structure of the Mobile Open Series aims to let amateur players and grassroots teams move their way up through the competitive ecosystem. Then at the ESL Mobile Challenge, the best players from the Open level of the competition will face-off against invited teams in a season through to finals format.

While the first portion of the competition will be played via an online format, the finals are currently slated to be held at live major esports events around the world.
Check out ESL’s dedicated Mobile page for more information, including a full list of mobile games and how to sign up for the Mobile Spring 2021.

Competition during the Challenge phase will be covered with extensive live broadcasts. You can catch the action on the ESL Mobile Twitch and YouTube channels. Here’s a quick peek at the full dates of play:

It’s definitely an exciting time to be a mobile gamer! For all the latest news surrounding the ESL Mobile open, be sure to follow their Twitter.