To find out more about what StarCraft II is going to look like in 2019, let's take a look at their announcement detailing precisely that: 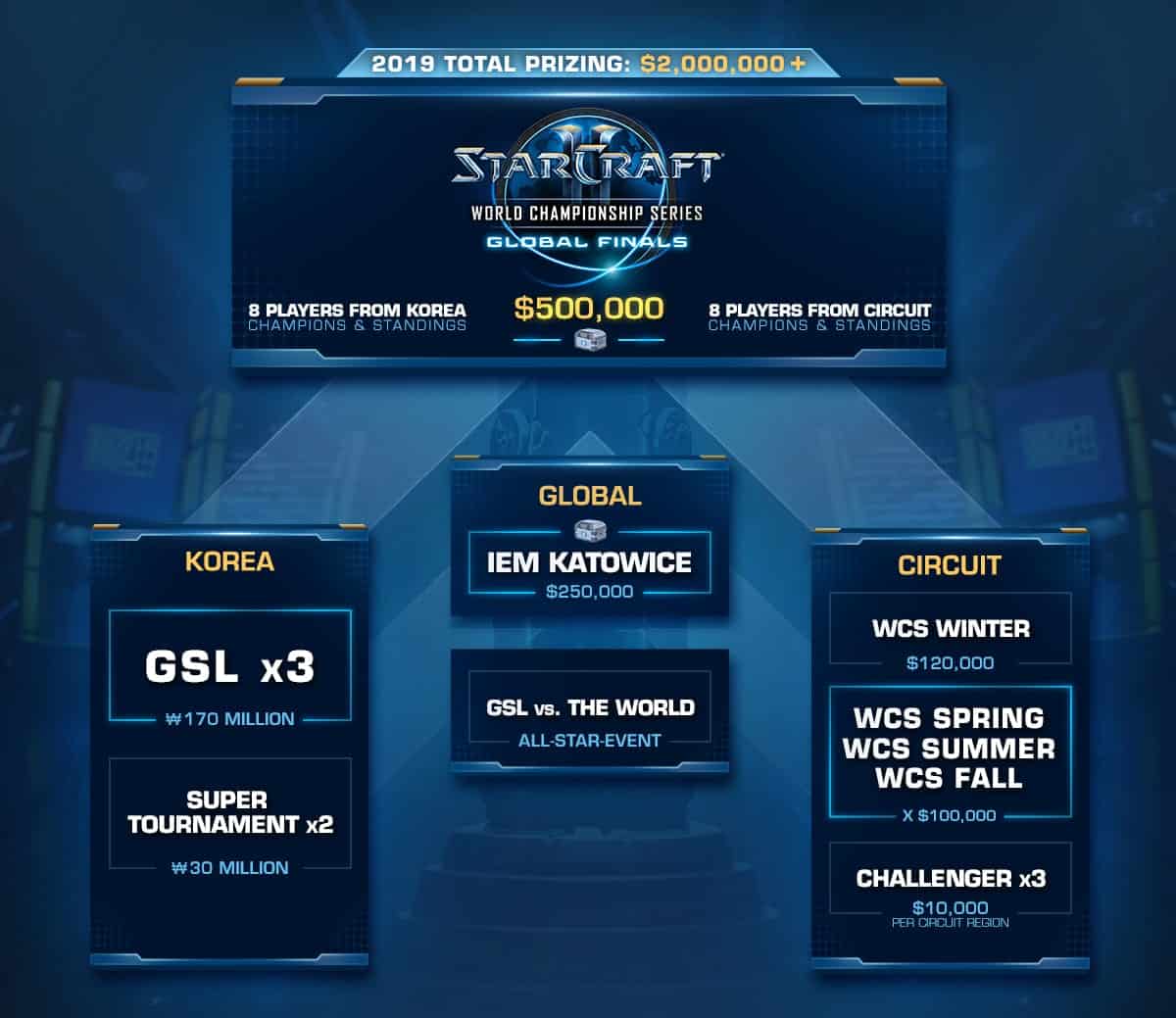 “The Starcraft 2 World Championship Series (WCS) 2019 is much like last year, with a few notable changes. WCS Winter is our first Circuit event of the year, followed by WCS Spring, Summer, and Fall. WCS points will be distributed at these events, alongside WCS Korea (Global StarCraft League), and two global events—IEM Katowice and GSL vs. The World. Furthermore, all of these tournaments will culminate at the WCS Global Finals at the end of the year. For a closer look at how the year will shake out, check out our schedule. The total prize pool is more than USD $2 million globally.”

Back when Blizzard announced the end of competitive Heroes of the Storm, there was some speculation that maybe StarCraft II would face a similar fate. Then, when WCS Winter was announced, we found out that it replaced one of the traditional WCS Circuit stops and it seemed (at the time) like everything else was going to be status quo, but it now appears that the plan was to eliminate all the Circuit stops all along. If that's true, then what happened to Dreamhack?

If WCS Winter is the first WCS Circuit event with WCS Spring, Summer, and Fall following at the heel, does this mean that Dreamhack is no longer organizing these events? Based on this announcement, it would appear so. But then if you read on, it goes on to say:

“The StarCraft II World Championship Series (WCS) has three WCS Circuit stops in 2019. In addition, a new event to kick off the season is currently underway: WCS Winter. For WCS Spring and Summer, we will be partnering with StarLadder to bring you two live events in Kiev, Ukraine. […] For WCS Fall, we will once again be bringing a WCS Circuit event to fan-favorite DreamHack Montreal.”

And, according to Starladder's press release:

Thus, it appears that while the partnership with Dreamhack isn't over (Dreamhack is still doing WCS Fall), Blizzard's apparently found a new partner (Starladder) to organize at least some of their events. Why? Who knows, but it probably has to do with cost-savings.

GSL will be back, same as last year, with the same format (3 Seasons, 2 Super Tournaments and GSL vs. The World) and you can watch it all on AfreecaTV. This marks the 9th year since GSL first began broadcasting StarCraft II and here's to hoping they'll be many more.

I got to say, this next part is pretty hilarious, and you'll see why if you read on.

“We tested a rule change for players competing in Season 1 of GSL, restricting them from participating in Season 1 of WCS Challenger. Our goal was to limit the number of WCS Circuit players who would compete in the Korean tournament, but instead, it caused all but one of the registered Circuit players to pull out of the GSL competition. That was not our intention, and we are rolling back this rule for Season 2 and 3, bringing the residency rules back to as they were in 2018.”

Ouch. Can you imagine what the yelling was like when they discovered this boo-boo? Hate to say it, but someone probably got canned for this. On the bright side, everything else will be back to normal going forward, so there's that.

WCS Winter Europe and America broadcast returns on Thursday and continues until Sunday, and you can watch it here on ESTNN TV  so be sure to check it out.