Aces & Adventures is a new deck-building card game with a twist on this genre, this is why it's one to watch

Aces & Adventures is a deckbuilding game that combines the fun of more fantastical cards with more old-fashioned traditional playing cards and poker! It’s a mix of genres that brings the deckbuilding game to the world of table games. This is a new indie title that’s just gotten some new details over recent weeks.

There are plenty of deckbuilding games out there, especially in the roguelike format. However, this new addition to Aces & Adventure is still one to notice. It’s towards Hearthstone, but with innovative and new mechanics for card games. This is why this title is one to take notice of: 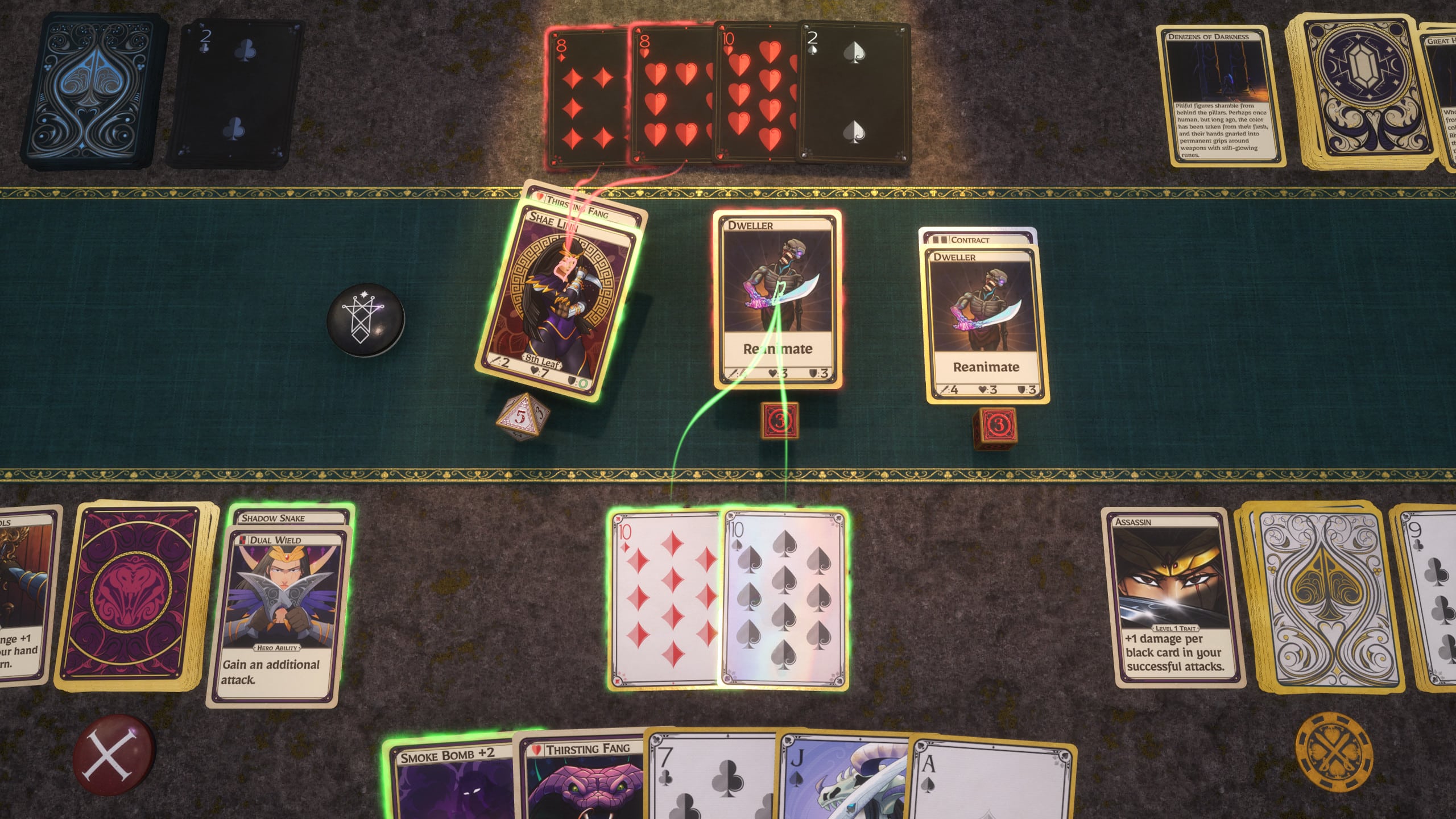 This is a new release that’s going to be dropping next year. It is a title focused on a card game, specifically inspired by poker. However, the core mechanic gets much more complicated than just seeing which cards you draw. You’re using poker alongside ability and power cards to take down opponents.

Players will craft their decks, and try to combine various poker hands with ability cards to deal out damage. The core gameplay is playable across 13 different campaigns, and each of them are fully voiced. That’s alongside more expansive additional game modes.

A procedurally generated game mode, one of the more impressive new features just announced for Aces & Adventure, where no two games are the same. There’s going t be a lot of space to explore its central card game. 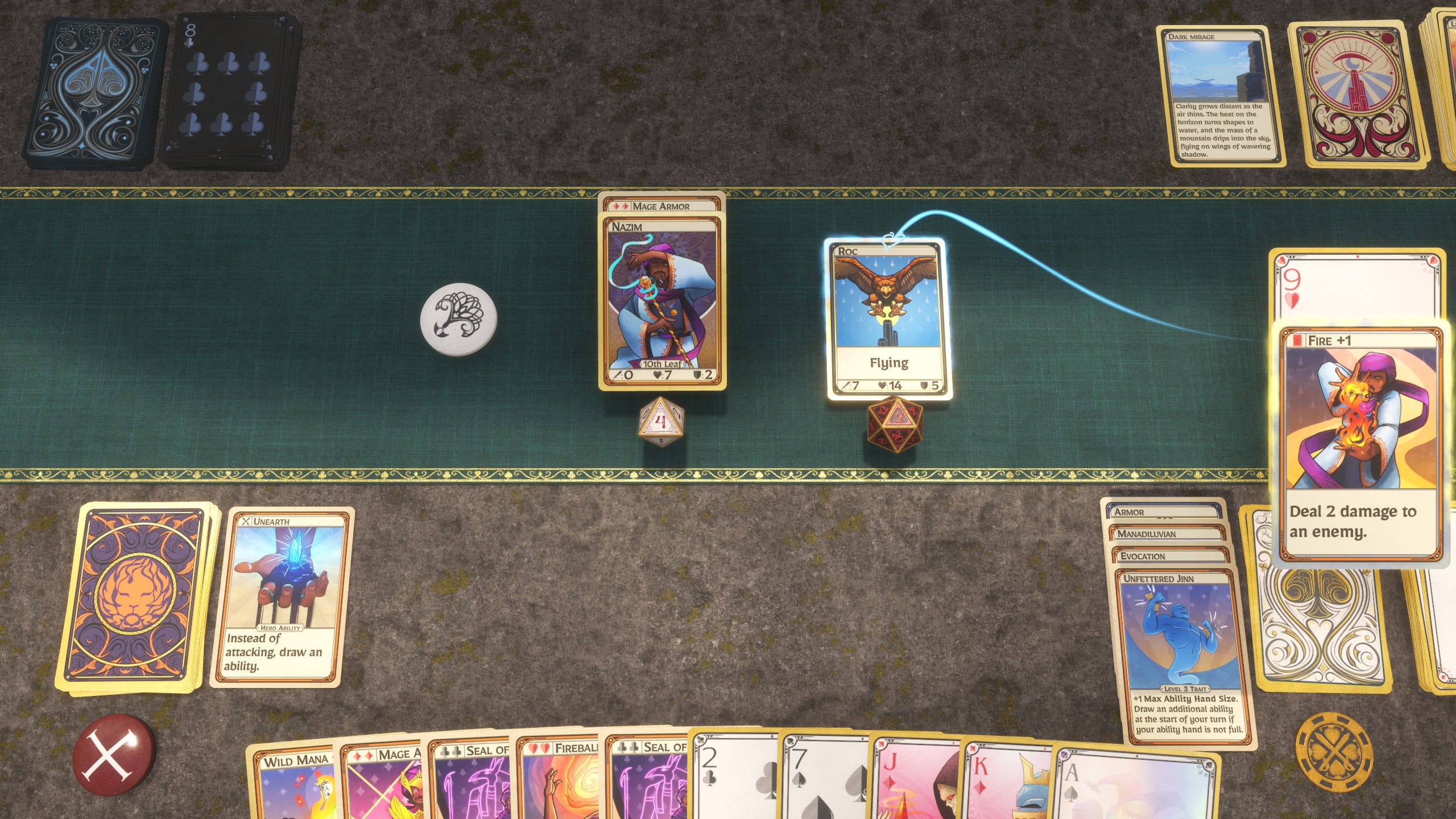 The core gameplay of this title is the card game itself. Aces & Adventures is a unique twist on traditional playing cards. Each game had you trying to take down an opponent through attacks. You’ll use traditional cards, but also special ability cards. You can beat your opponents through attacks with the ability card, or by forming high-value poker hands that do their own damage.

Dealing with traditional playing cards, there’s a strategy to what you draw. Each of the four suites acts as a mana for different abilities. You can also use them to form poker hands, which correspond to their value in that game. You can throw them down with high-value hands, dealing their own damage. Each deals damage depending on its value, going up to high-level five-card hands.

Your defender will try to match the card numbers in an attack, which can negate the damage. This adds a fun level of strategy. The game also features buffs, debuffs, abilities, spells, and everything you’d expect to add more complexity to this style of card game. These RPG effects work with both traditional playing cards for Poker, and more mystical trading card-style ability cards.

The playing cards work as mana in-game. However, they also work in their traditional values as attacks. This adds a new level to the mechanics of the game. It’ll be a fun experience for those who sometimes miss the more traditional type of card playing in these deck-building titles. 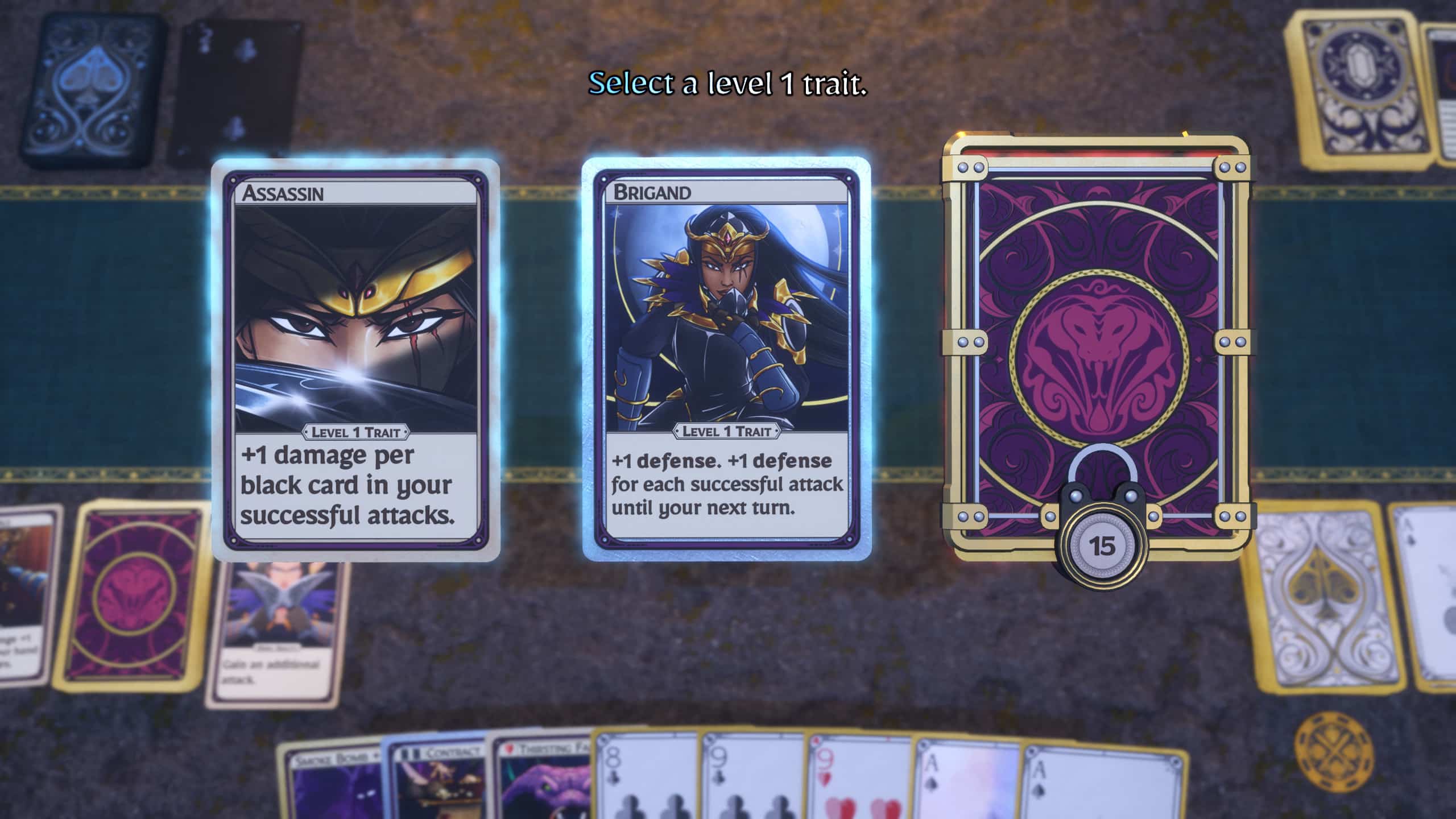 Playing cards are often more associated with luck. However, as this is a deck-building game there’s a bigger reliance on strategy here. Building the right decks from combinations of cards should mean you can triumph no matter what hand you’re given.

Deck-building games aim to take the luck out of card games. A well-built deck should mean you’re in a better position, no matter which hand you pull out of your deck. Applying this style of gameplay to traditional playing cards is a fun twist on the genre.

Each character has a different class. This gives them different specializations, similar to an RPG. These are some of the classes and what they specialize in:

There are 5 characters in total. Each of these characters comes with a different set of abilities and skills. You can get through 30 different advancement levels with them, making this a pretty fleshed-out side of the game. With full voice acting, Aces & Adventures looks like it’s really doing a good job fleshing these characters out beyond talking heads to fill out a card game.

The game is divided into four different seasons of difficulty. The colder the world gets, the harder things will be for you. You can start earlier in the year while you find the footing for the new style of the game card, before getting to winter as you master it.

This might not feel like it’s going to be as hard as some card games like Slay the Spire, or competitive as hearthstone. However, with so much content in the campaign things are sure to get tricky as you reach the higher levels of the game. That’s along with a procedural mode to keep you busy. Skilled players will have plenty of challenges. 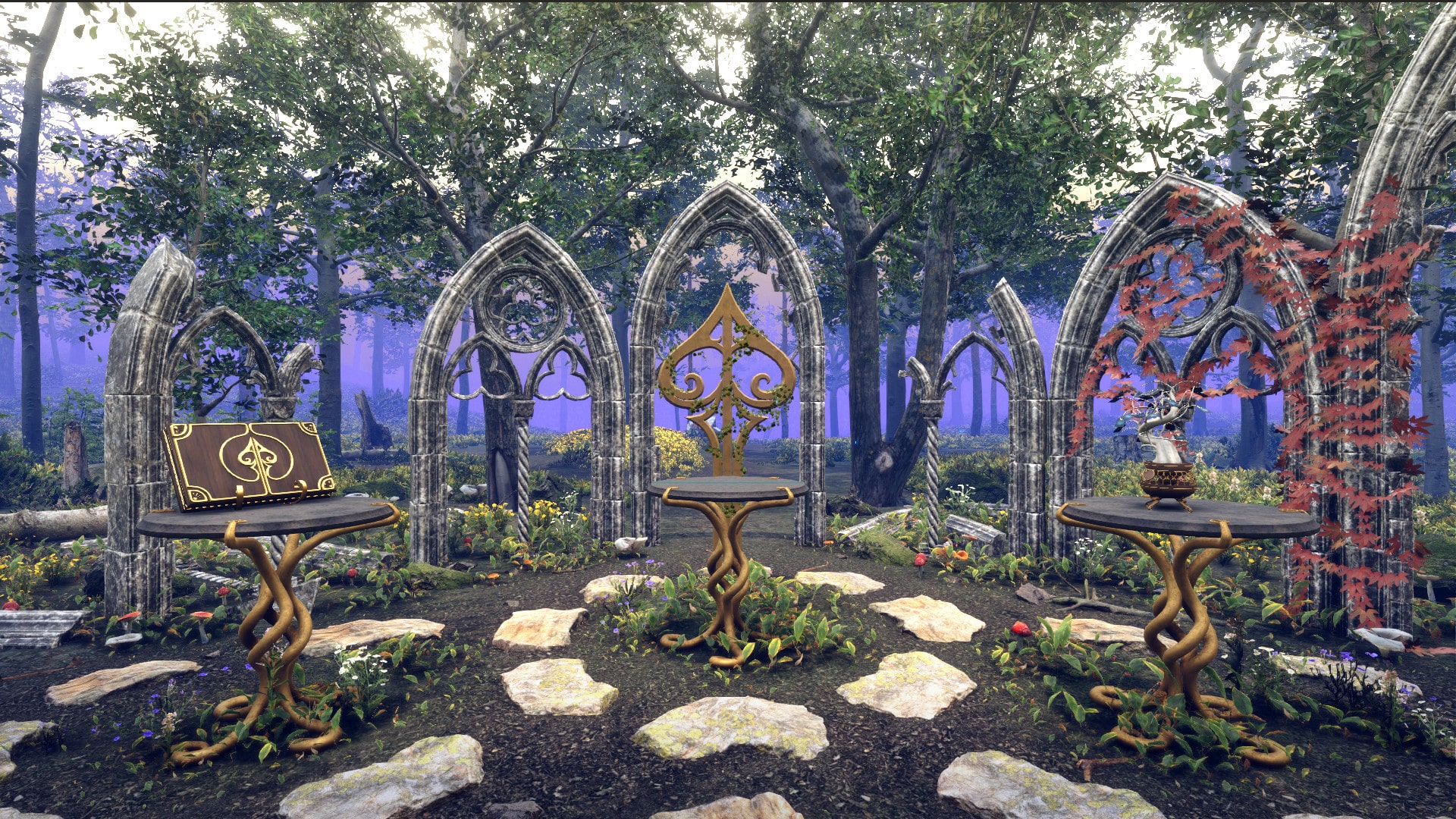 That’s some idea of why the core gameplay of Aces & Adventures looks promising. A decent card game isn’t much fun in isolation, though. So far, two ways to play have been explained in more detail from developers. The bigger one is definitely the campaigns.

Each of the 13 campaigns in the game is fully voiced. With 4 seasons on top of that, there are 52 levels in total and each escalates in difficulty until you hit the very highest tier. It’s a tidy number for a game pulling in playing cards and a hefty story mode for those who really gel with this strategic gameplay style.

Players are on a journey to Save the Life Tree. An evil force is gnawing at the roots of this tree. Each of your cards from the leaves of the tree itself, which you’ll use to save it. With full voice acting, the story will likely go a bit further than this setup, though! it’s the central theme for Aces & Adventures

The look of the game shown off so far is polished and clean. A deckbuilding game never has to shatter expectations for visuals, but this looks smooth and pleasing enough for focusing on the cards. The game is fast-paced and made to be played in shorter stints. 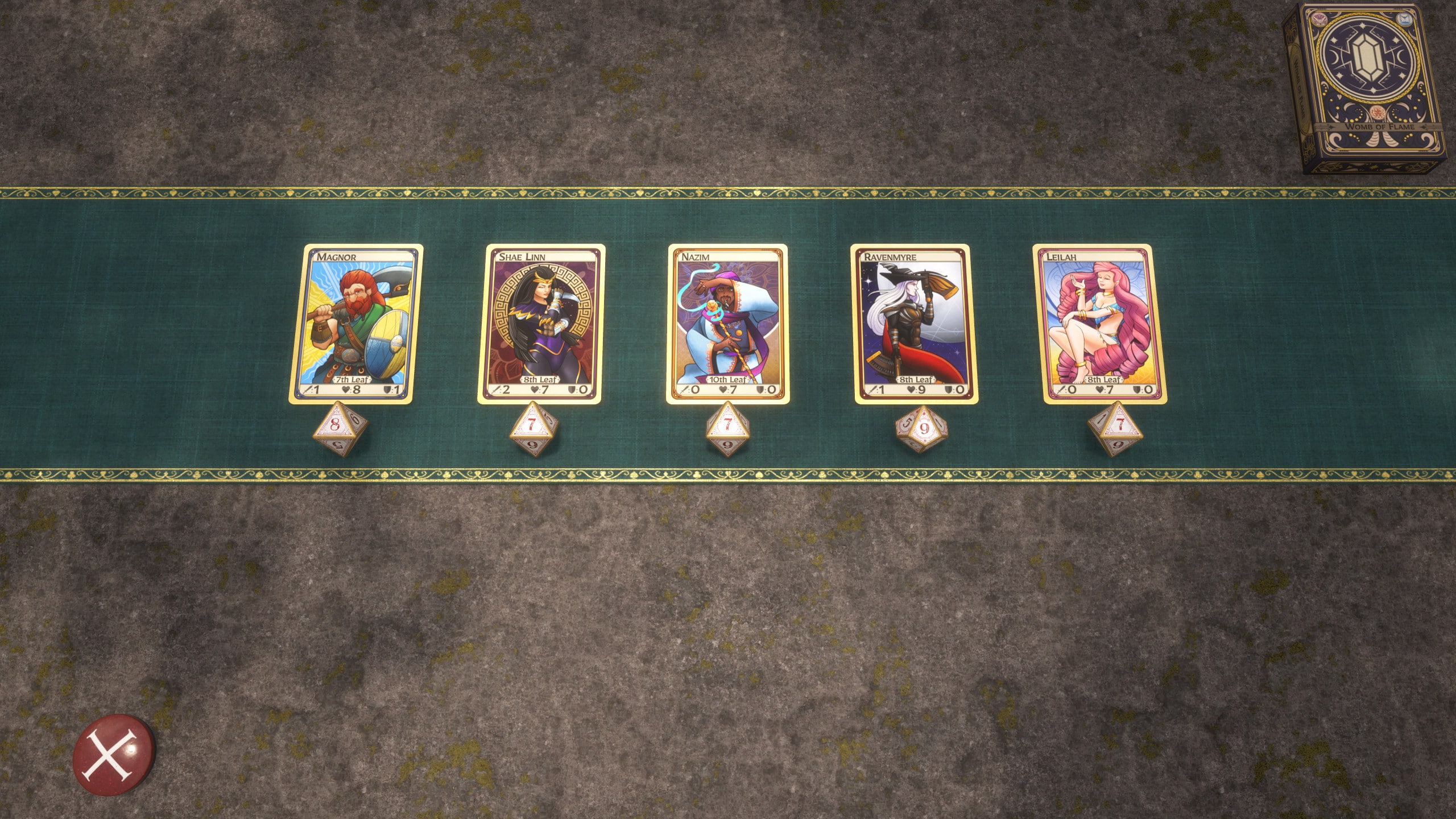 The Procedural mode is adding a lot of replayability to Aces and Adventures. This mode is procedurally generated rather than a hand-crafted narrative. Instead, it's longer, random, and can be replayed if you want more of the game’s core battling gameplay.

This mode reshuffles and tweaks content from the rest of the game, along with newer experiences, to give a different journey each time you play through. This adds more life beyond the campaigns. 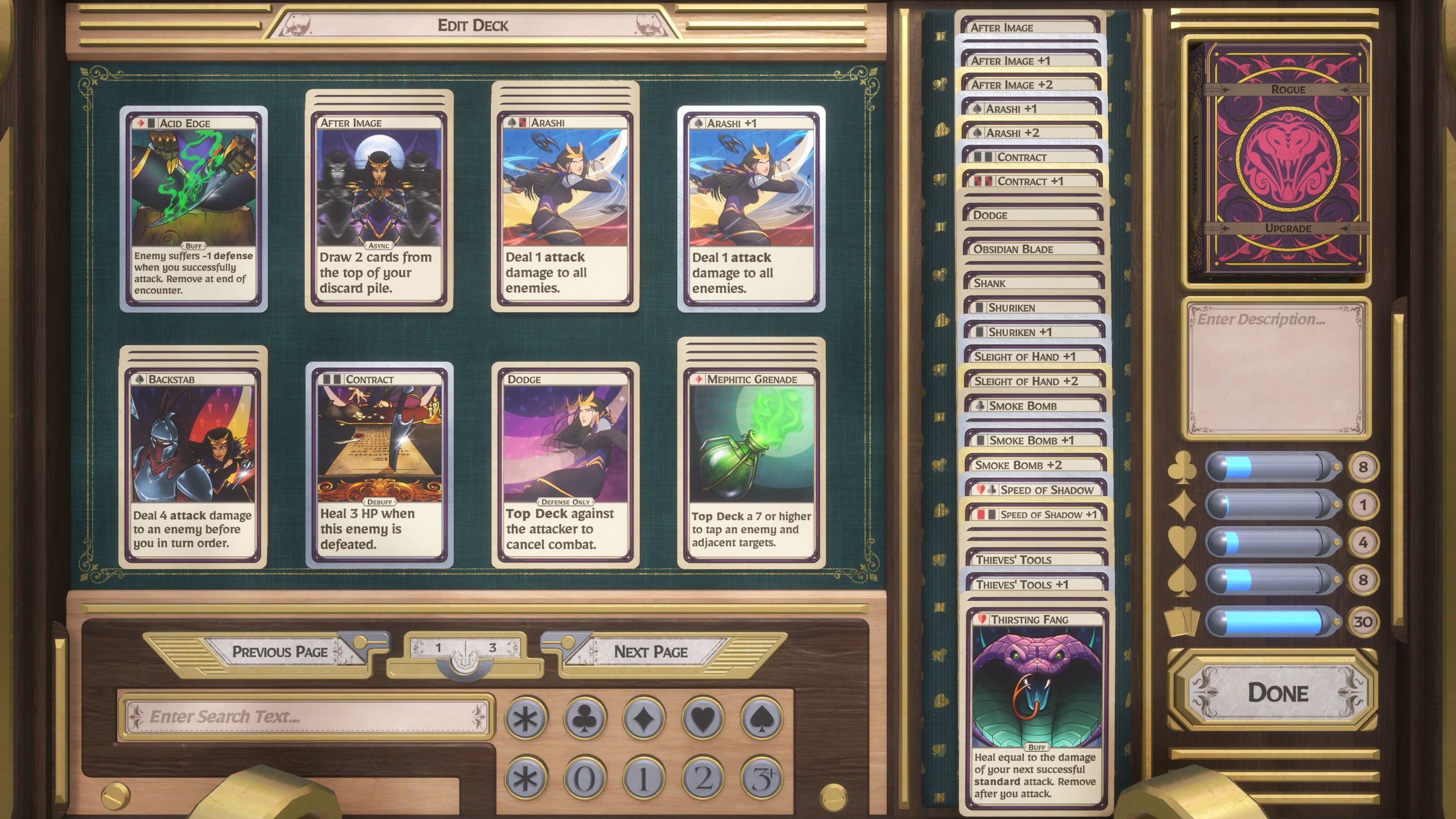 The card game is based around poker, but with unique ability hands and characters outside of your standard 52-card deck.

As with most games in this genre, a lot of fun comes from deck building. As you level up your cards, you’ll get more and more powerful cards. From here, you can build increasingly OP decks with abilities upgraded to elite and Legendary status.

You’ll have to suit your deck to which character and role you play. A decent deck should be playable even if the cards aren’t in perfect order. With both traditional and ability cards, there’s going to be a lot to think about with deckbuilding. It looks like this is going to be central to strategy and gameplay in Aces &Adventures.

While the title is now much closer to release, it’s had a public journey there. Like many more niche indie games, Aces and Adventures turned to Kickstarter for the funds to support the game's development. The title managed to raise 16,807 to supplement funding and help get to bring the title to life.

The game’s 416 backers received a range of rewards for backing the game early on. These varied from soundtracks and codes for the game, through to exclusive attack tokens, names in credits physical rewards like playing cards.

While some have had early access to some parts of the game, it’s set for a general release very soon. 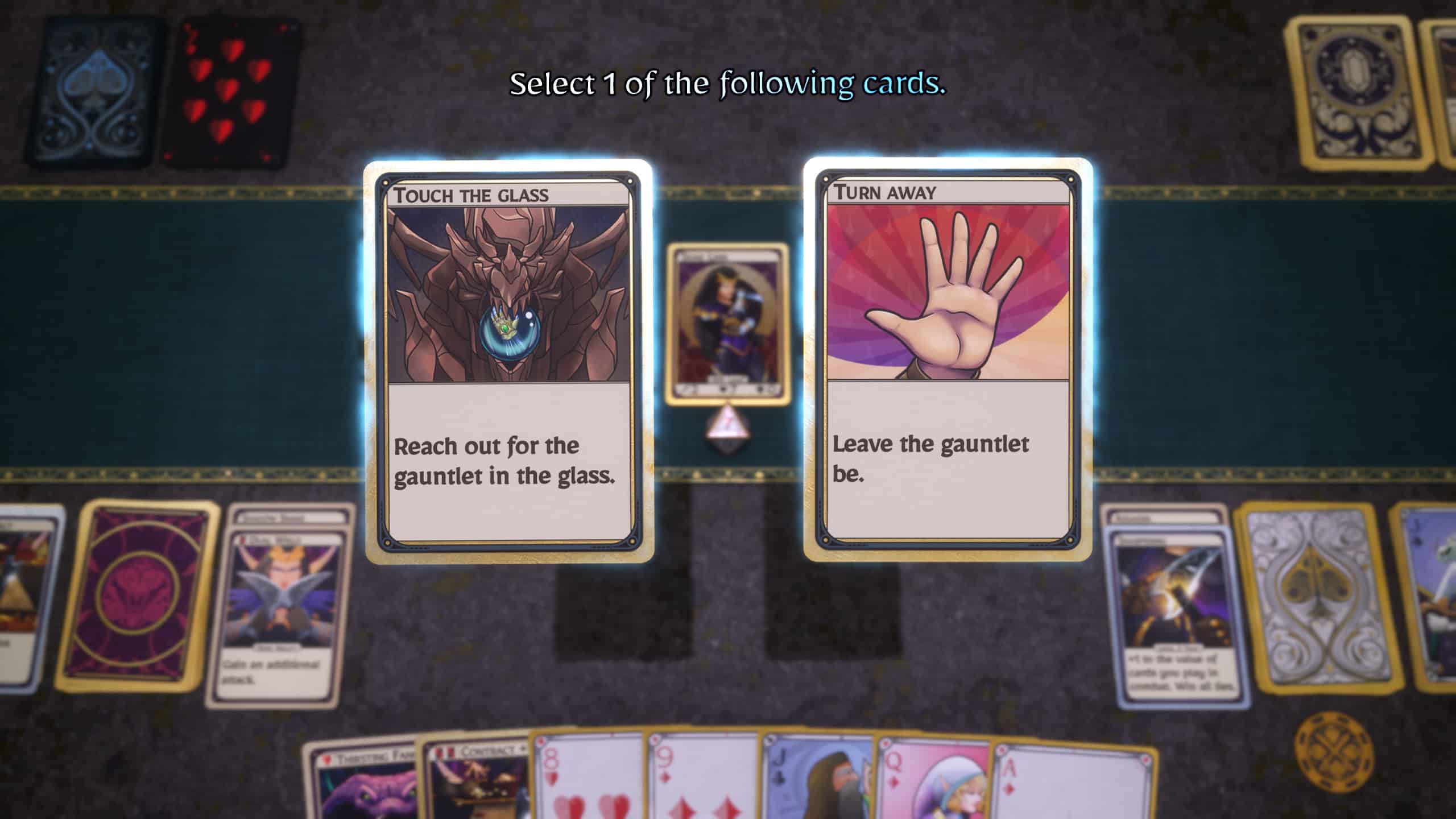 Aces and Adventure is going to be released in full in early 2023. There isn’t an exact date yet. A tactic that should help to keep the game free from specific delays! The game is still receiving announcements of new content, like the procedurally generated mode that was recently revealed. However, trailers and more information have been released for the game, and it looks like a title that fans of deckbuilding and other card games should keep an eye out for.

We can expect the full title to come out in early 2023. The Kickstarter page for the game has regular updates, along with their social media.