So you've finally decided to dip your toes into World of Warcraft Dragonflight or you're returning from an extended absence? Here is our little guide to get you started!

Picking a Class and Race

If you're starting out with World of Warcraft Dragonflight, things can be quite overwhelming. You're imminently confronted with a bunch of decisions, what race you should play, what class is the best, and so on. We're here to tell you, 'Don't Panic'. While these are some of the most important choices you're going to make, as a beginner, you shouldn't worry so much about what is the best way to play.

The only thing you need to know is your own preferences. Do you want to be a highly mobile melee class that's always in the thick of it? Or do you prefer a ranged class that sacrifices mobility for relative safety? Then there's the Trinity to consider, do you want to be a Tank, Healer, or DPS? All of them are important, but if you don't have any experience with MMORPGs, a DPS or Damage Dealer is the best choice. Many of Warcraft's classes even allow you to jump between multiple roles but the Damage Dealer is probably the easiest to pick up.

But what Class you'll end up picking is completely up to you. You can try out all the classes with the class trial feature to get a feel for what they play like at the higher levels. Don't worry, and most Classes are very easy to pick up and play. And most importantly, all of them are completely viable even if you're planning to jump into high-end content. And if you find yourself not liking a class, getting started on a new character is also quite painless.

The same goes for Warcraft's various races. Generally, they are all viable. There are just some that can't pick classes. More important is which faction you want to belong to, the Alliance or the Horde. Generally, there is little difference between the two on a gameplay level, but the storylines available to you can differ to some degree. Sadly this isn't really a decision you get to make either; if you have already chosen a server, you should check out the faction balance. While cross-faction interaction exists to do content, it still affects your experience to some degree. So choose wisely.

Once you've picked a class, race, and faction, you can jump into the real game. We're going to skip the very basics of World of Warcraft because you should definitely do the Exile's Reach starting zone. Not only is it an excellent Zone that will teach you everything you need to know about how to play World of Warcraft, but it will also ease you into the world and characters as well as your class' basic gameplay concepts.

Leveling and Getting to 58

Once you're done with Exile's Reach, you should have a rough idea of what you're doing and a general sense of direction. And you're now being released into the real world in which limitless freedom awaits you! Well, the game will railroad you towards the Battle to Azeroth Expansion, but at least you're getting a mount. Your next goal should be to get to level 60 as soon as possible.

World of Warcraft's leveling process is rather painless and going through the Battle for Azeroth campaign should get you there fast. If you need a change of scenery, consider visiting Chromie in your faction's capital to initiate time walking. That way, you can start the campaigns of other expansions, and the content and gear rewards will always be tuned to your level so there's nothing to worry about.

If you want to get a little boost to your experience points, it's highly recommended to queue up for a random dungeon with the dungeon finder tool. You'll get in and out of a dungeon quickly and on the normal difficulty, they tend to be on the easier side. For even more experience points, you should pick up quests related to a dungeon; sometimes, you'll find them near the entrance and sometimes, they come on the tail-end of a quest chain. 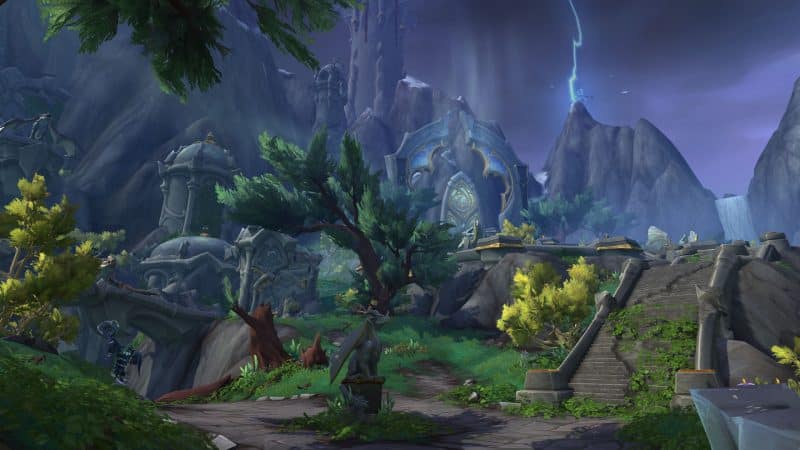 It's probably for the best to rip the bandaid off as soon as possible. While World of Warcraft boasts an impressive amount of player expression with how much variety you can put in your gear and the big talent trees with all those choices, let me tell you now that those don't matter at all. The talent trees might look big and super interesting, but if you haven't spent the past 10 years obsessing over them, they might as well have been written in another language.

World of Warcraft and some of the community do an awful job explaining why you should make certain decisions on your talent point distribution and what gear you should be going for. So instead of tearing yourself apart over which color of fireball is the best, we recommend checking out the legwork the good people on sites like Wowhead and Icy Veins have already done.

Here you'll find what kind of gear and stats you should be prioritizing and what talents you should pick for the specialization you want to run. It's not worth it to obsess over numbers and systems that are this inaccessible. Especially once we go into gear-specific enchantments and trinkets. There's a reason that there are people on these sites who make a living by making this information more accessible to the general public.

While leveling, you don't really have to worry that much about gear, you'll constantly get to replace it anyways, and generally, the game will shower you with gear that's useful for your class. 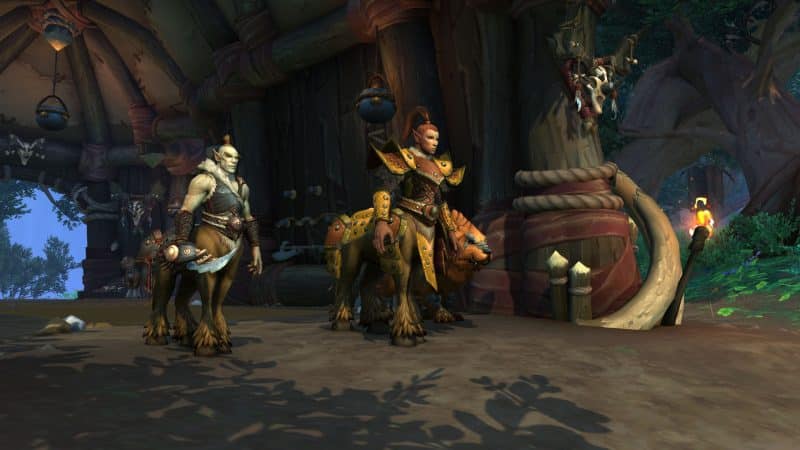 Once you've reached your most noble goal of speedrunning to level 58, you can finally play the video game that everyone else is playing. Congratulations, now your next task is to hit the level 70 cap, and only then you're finally able to play the real game. But this is probably also the time to take a breather and take things a little slower. The best way to get to the level cap without losing your sanity by spamming dungeons is just following the campaign.

The Dragonflight campaign will give you a nice little tour of the island, reward you with gear and unlock the new dragon-flying system that'll help you get around even faster. While doing that, don't be afraid of getting lost occasionally. On the regular, the campaign questline will gently nudge you towards doing a dungeon with a quest conveniently available in front of it. Do those for some extra loot and a nice little injection of experience points.

And by the time you finish the campaign, you'll either be near the level cap or you'll have already reach it. If you haven't, the best way to level up and get some reputation points is probably by doing world and sidequests littered around the open world. Luckily, World of Warcraft is designed in a way that all quests available in a hub, tend to take place in the same general area, so you can cut down traveling time to a minimum.

But more importantly, you should invest some of your time into leveling a profession. Keep in mind that you want to level professions that rely on each other—skinning and leatherworking, for example, or mining and blacksmithing/jeweler. The in's and outs are not that important, but during your Dragon Isle adventures, consider leveling up at least one of the gathering professions like mining, skinning, or herbalism. These usually only take a small departure from your regular play.

Then you can just sell off whatever you gather in the auction house. It might not be a lot of money but in time, it'll add up and give you a budget to get consumables, gear, and maybe that special mount you always wanted. 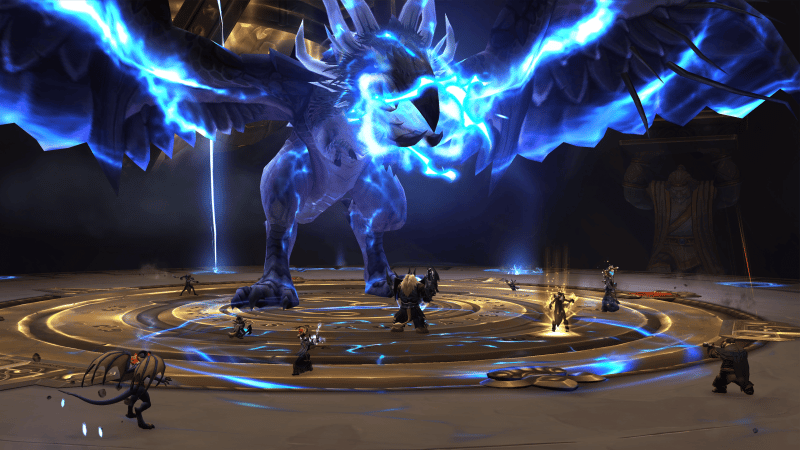 Once again, congratulations. Now that you're at level 70, the world is at your mercy and you are now able to do all the things you have been doing before just without the instant gratification of getting experience points. Now your entire playtime will evolve around getting better gear, looking for groups to do content with, and cleaning up the map littered with all those pesky quests and world events.

This is also the point you probably want to find a guild. You just have to make sure that your guild lines up with your goals. There are many guilds that expect you to participate in endgame activities, especially if those guilds exist with the intended purpose of clearing the raids on the highest difficulty or pushing mythic + dungeons.

But before you take a plunge into harder content, try to find a guild that's welcoming toward new players. Generally, it should be easy to find a casual group of players that are mostly concerned with getting their weekly things done in time and a friendly weekly raid night.

First, we need to take care of gear. One way to get at least 'raid ready' is by spamming heroic dungeons. Heroic dungeons are the regular dungeons of Dragonflight, scaled to level 70 with some added difficulty. They'll reward decent gear and are generally a breeze to go through. Luckily, you can just join them by hitting up the dungeon finder tool.

Another way to gear up is by participating in the weekly world quests that are popping up around the map. These tend to reward varying pieces of gear and are generally an upgrade if you're a fresh level 70.

But if you're down to just grind for a while, you can participate in the primal storm events that'll pop up on the map every three hours. Just by killing mobs, you'll earn a currency called Elemental Overflow that you can then use to purchase heroic-level dungeon gear. And it's probably the most painless way to get gear fast. You can also participate in a weekly quest that rewards a currency you can then use to give that gear a significant upgrade. You'll find the vendor in Valdrakken.

And this concludes our little into World of Warcraft. For more guides on WoW and the latest in gaming and esports, visit us here at ESTNN