Blizzard has outlined plans for what’s to come for WoW Arena, and Mythic+ Esports in 2022.

It was a challenging year for WoW, like all esports, as it had to head back online. While far from the most popular of esports, Blizzard managed to cope well given the COVID situation and delivered a solid year of events. If all goes to plan, 2022 will see a return to at least one LAN event.

Starting off with the AWC circuit in March, we’ll see EU and NA events taking place over four weeks with points and cash prizes on offer (full schedule below). Each of the four weekends, known as cups, will feed into an overall points pool ahead of the Grand Finals. The top four sides in each region will then compete for a $300,000 prize. For now, no date is set for the Grand Final, with the rest of the 2022 circuit also left up in the air. Blizzard did confirm that we’d be seeing “some new one-off events to test out ideas on further evolving competitive PvP”. We’ve seen similar one-off events in the MDI circuit, so it’ll be interesting to see what the AWC has to offer.

Over in the time-trial PvE scene of the MDI, we’ll be returning to the group format from season 2. Teams from all over the globe will compete in time trials (registration open now) to post the best times to qualify for the group stage. The top 24 sides (excluding China) will then be posted into three groups of eight teams, with the top two qualifying. China will have its own group, with one side qualifying. They’ll also be the Last Stand tournament, with one more side given the chance to qualify. Like the AWC, the global final will feature a $300,000 prize pool. 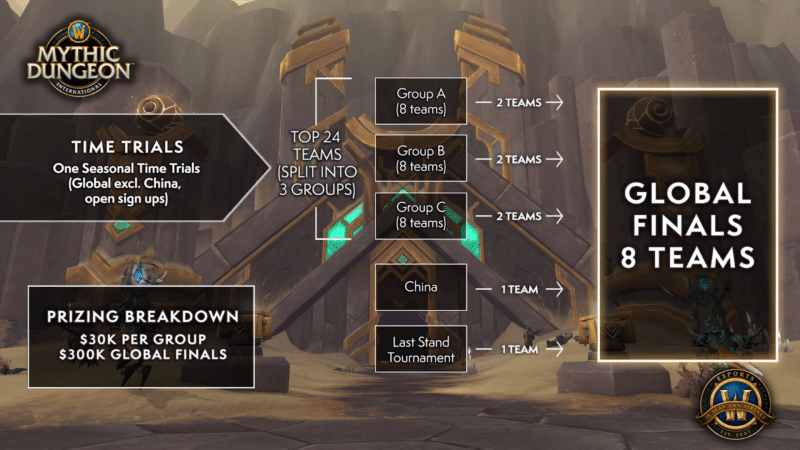 The 2021 season saw the introduction of the Great Push format, and Blizzard is bringing that back for 2022. In 2022, we’ll see multiple “mini-season”, with news on the dates coming after the first global MDI final.

Classic Arena will return once again in 2022, with European and North American teams taking part in the 3v3 Arena tournament. Offering a combined $100,000 in the prize pool, the first event gets started on February 12 with the offline bracket. The main event will take place over the following weekend from Friday 18 to Sunday 20. All AWC and MDI events will once again be streamed on YouTube; though the Classic Arena is likely to also feature on Twitch. Blizzard will announce more events later in 2022, with a possible return to LAN.