Following the success of the Gizmos and Gadgets, let’s take a look at TFT Set 7 Dragonlands.

The last two sets of TFT, Set 6: Gizmos and Gadgets and Set 6.5: Neon Nights, have been a great victory for Riot. The game saw a lot of its player base coming back, and the competitive scene and Worlds were great successes. This was partly due to the previous set mechanic, Hextech Augments, which will return to the Set 7, the first time a set mechanic is reused.

In a January 2022 Dev Drop, Riot announced that the new set was too: “…take place in the dragon realms where clans compete for power across various islands, each worshipping their own powerful ancient dragons locked behind the mysteries of dormant shrines…” . And the TFT lead designer Stephen ‘Mortdog' Mortimer has been dropping ‘spoilers’ on his stream and Twitter for a while.

But after some leaks coming out of China, Riot decided to officially announce the details of the Set 7 Dragonlands, which will be live on PBE on May 24. So let’s see what some new additions to the game are.

What is new in TFT Set 7: Dragonlands?

Before what is new, let’s talk about what is staying: the augments. After the success of augments and the player’s reception to them, the design team decided they were a good addition for later sets.

Of course, as always, we will say goodbye to some trait-specific augments in exchange for newer ones. And there is also some quality of life changes such as:

Dragonlands offers a variety of exciting classes and origins for players to shape their teams. Mortdog and the design team weren’t happy with some of the more ‘boring’ classes, such as Set 6.5’s Strikers, as they mostly gave base stats to champions. So for Set 7, it seems like they tried their best to provide a unique experience.

There are multiple returning traits, some fan favorites some not so much like Bruisers, Assassins, Mages, and Mystics. However, the set also has some new additions like Starcaller, Bard and Spell-Thief origins, which all are 1/1 origins for 5-cost champions Soraka, Bard and Zoe respectively.

When it comes to classes, there aren’t many repeats here. There are some similar ones like ever-changing Mirage like Set 6 and 6.5’s Mutant or Jade which has a summon as one class always has. Still, the rest of the classes are mainly new like Astral, an exciting take on a re-roll trait, or Guild with its unique team-wide bonuses. 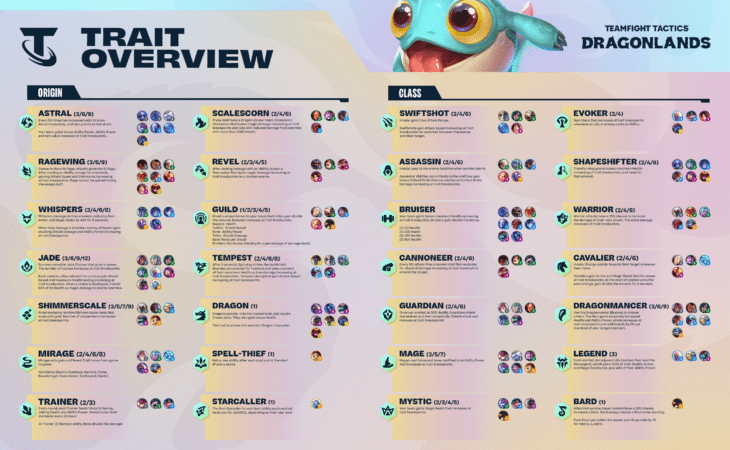 Dragonlands will launch with 58 total champions, some of them being reprints. However, the design team said they are trying to shy away from reprints as they aren’t as exciting as new champions, so their numbers will be on the lower side for Set 7. Ezreal, Ashe, Braum and Leona are some units coming back from previous sets with the same abilities.

The 5-costs of the set are Bard, Pyke, Soraka, Yasuo and Zoe.

What kind of dragon-themed set would it be without a Dragon trait, right? Of course, dragons aren’t just a trait, but also they are the set gimmick this time around.

These powerful creatures are 8 and 10-cost units, and they will count three times towards their non-dragon traits. However, besides their costs, they also count as two champions when you put them on your board, similar to the Set 6 Colossus.

Dragon trait activates when only one dragon is on the battlefield (unless altered by a Draconic Augment), and it grants 600 bonus health and plus-three stats to a marked trait. Dragons of the Dragonlands are:

Fans of League of Legends will recognize Shyvana and Aurelion Sol from the game, while the rest of the dragons are created uniquely to the TFT. This is the second attempt from Riot to create champions only for TFT, after Arcane villain Silco’s debut in Set 6.5.

With dragons, there is also a new mechanic coming called Treasure Dragon, similar to Armories, available on round 4-7. Players will get five consumables which can be items, components or gold, and you can choose to take all or reroll for one gold. All players will get treasures equal in power.

Riot has announced that Dragonlands will go live with the Patch 12.11, which is expected to drop on June 8, 2022.

Fortunately, the fans can experience the new set on Public Beta Environment two weeks earlier. If you want to get in on the Dragonlands hype, the set will be on PBE on May 24, 2022.