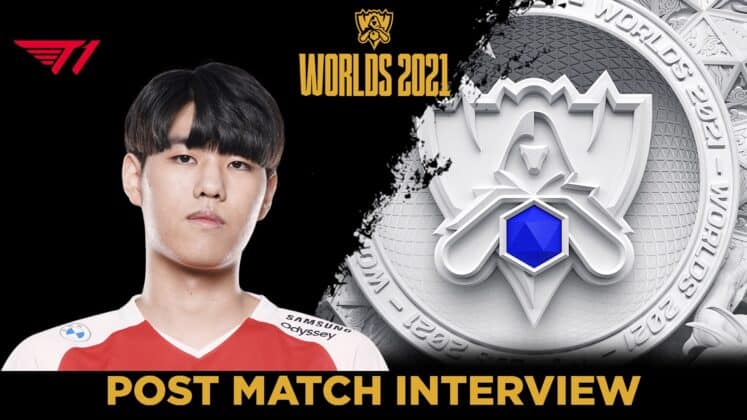 Oner has been instrumental in the growth of the young T1 League of Legends team.

Upholding the marvelous legacy of the Korean League of Legends team, T1 has made an explosive entry to Worlds 2021. The young roster brimming with talent under the veteran leadership of Lee “Faker” Sang-hyeok is ready to make strides on the international stage.

In this exclusive interview, ESTNN had the opportunity to talk to their jungler Moon “Oner” Hyeon-Joon about his debut at Worlds 2021, his opinion on the current jungle meta, his interesting jungle champion picks, problems in the EDG vs T1 match and more. To note, this interview was taken after T1 completed their third match of the Group Stage against 100 Thieves.

Congratulations on the victory today, Oner! How are you feeling after winning the match against 100 Thieves?

This was the match that we thought we had to absolutely win. I think we pulled off a pretty convincing victory today so I’m happy about the results.

Could you tell us a bit about your surprise Poppy jungle pick today?

So we had a lot of high-tiers banned in the draft phrase so our plan was to protect our (damage) dealers, that is why the Poppy jungle was picked.

This is your debut at Worlds. I’d like to know if nerves played a part in your performance so far or are you quite comfortable at Worlds?

I’m definitely confident in what I can do but I am the type that gets nervous pretty easily. So I saw how shaky I am sometimes, and I am trying to win over it.

You’re one of those junglers who like to skirmish and counter-jungle the enemy team. How do you like the jungle meta so far at Worlds 2021?

So I think there are two types of junglers that can be played right now in this meta. One is assassins like Talon who can aggressively make a difference in the game and the second is the type of jungler that I played today [Poppy] where you are playing a supportive role for the team.

In your first match against DFM, you played Talon jungle with Keria running Yummi with you. It was an absolute delight to watch those big plays dominate the opponent. What is your opinion about the potency of Talon in the jungle?

I think Talon is an okay jungler but I think you need a supportive champion like Yummi to help them out or else it is not gonna be a very viable pick.

Adjusting to the Worlds' stage

Contrary to what we saw in the first match, EDG targetted you heavily during the second match of the tournament for T1. What do you think went wrong for you particularly in that match?

So for the first match, we were feeling comfortable with everything on the stage, the environment, the lighting and everything. But for the second match we felt a mild difference in the environment, so we were feeling a bit uncomfortable. And because of that we were talking about lights and what feels different and we weren’t able to focus more on talking about picks and bans. I think from there we kind of trapped ourselves into not performing our best.

Korea as a region is considered to be one of the most dominating regions in League of Legends esports. What sets your region apart from other major regions like China, Europe and NA?

I think the LCK has great fundamentals overall compared to other regions.

Before coming to Worlds 2021, you said [in an interview with Ashley Kang] that you would like to meet RNG Wei in the jungle. Are there any other junglers or teams in your mind that you’d like to face at the tournament?

I wanted to play against EDG so I think I am fortunate that we were placed in the same group. But in terms of a player, I don’t think I have someone specifically.

To wrap the interview up, do you have any words for the fans?

I feel like there’ll be a lot more global fams watching me now that I’m at Worlds, a global stage. So I’ll do my best to not disappoint you guys!

T1 has since qualified to the Knockout Stage at Worlds 2021 as Group B's first seed. You can watch the interview originally posted on our YouTube below!