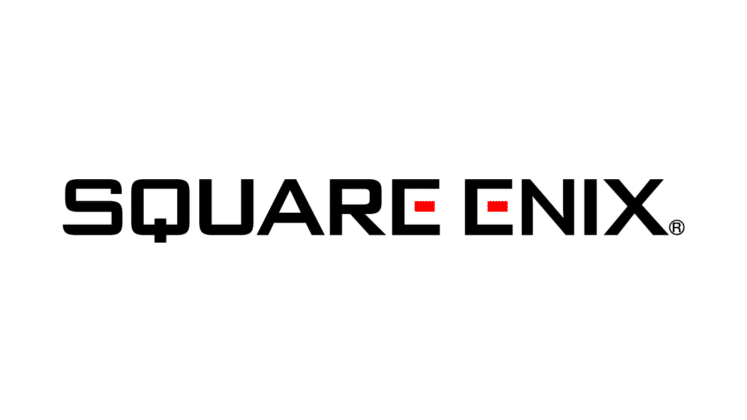 Despite the lack of High profile titles, Square Enix came out of 2021 looking better than ever. Here's the breakdown on Square Enix's Financial Report!

DISCLAIMER! All the information here is from Square Enix's Financial Results Briefing Session 2022 which can be found here. The rest are my own musings on the subject and should probably not be taken 100% as fact. Just conclusions drawn from being a fan for over 20 years.

Recently Square Enix made some waves in the gaming industry, after announcing that three of their major studies and their IPs had been sold. People where quick to reach for answers, a popular one was Square Enix's pursuit of getting into NFTs. Now, younger readers might not remember this, but in ancient times, around 20 to 30 years ago. One of Square Enix's ambitions was pushing the technological limits of games. Which led to hubris and a very rough start into the 2010's.

For those who keep up this stuff, it wasn't that much of a surprise that Square Enix would sell Crystal Dynamics and Eidos Interactive. Both of them had recently worked on licenced Marvel games, which released to little fanfare and moderate reviews. Which is a shame, because both studios are known for their respective signature franchises like Tomb Raider and Deus Ex. Which usually find their own niche, but according to Square Enix failed to meet sales expectations. But we heard that story before, IO Interactive went independent after Hitman 2016 failed to meet Square Enix's expectations. Since then, they've been doing quite well for themselves. And we can now hope that both Crystal Dynamics and Eidos Interactive get to spread their wings under Embracer after being sold to them for $300M USD together with their IPs. (Personally I'd like to see a sequel to Deus Ex Mankind Divided and maybe even a rebirth of the Legacy of Kaine franchise.)

The aforementioned interest in NFT's might look like the main reason for the sale. But Square Enix has also stated that they are trying to refocus their business strategy. And communication between Square Enix and its western studios has always been somewhat troubled. The release of Deus Ex Mankind Divided and what happened with Hitman 2016 are probably some of the more infamous examples. One of the common theories on that is that japanese and western business culture don't really go well.

Refocusing their business also means that Square Enix is probably trying to put some serious money behind their workhorse franchises. While both Final Fantasy and Dragon Quest have never been hurting for yearly releases. They are hardly part of the conversation, unless we are talking about a certain MMORPG. But with the Final Fantasy VII Remake project, Final Fantasy XVI and Dragon Quest XII on the horizon, there is reason to be hopeful. And there has definitely been an effort by Square Enix these past years to cater to their core fanbase of JPRG enthusiasts, besides all the mobile games and odd spin offs. So It's left to be seen where the journey is heading.. but we have some ideas thanks to this report which we'll get to in a bit. 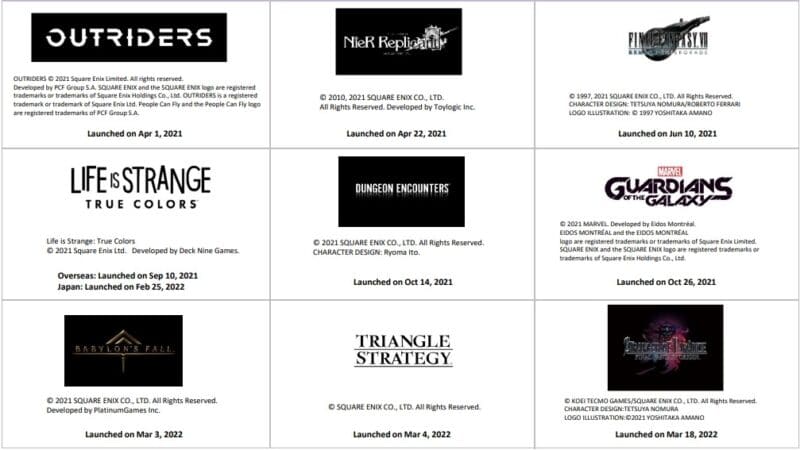 What did Square Enix Release in the Last Year?

Probably the most notable titles in Square Enix's portfolio last year where the Nier Replicant Remake, Life is Strange True Colors, Guardians of the Galaxy and Triangle Strategy. Those are by far not the only one's released, but the others are probably not worth talking about here. Unless you want me to go on and on about Babylon's Fall. Both the Nier Remake, which released to amazing reviews and Life is Strange True Colors which also reached critical acclaim. And while both are great titles, so is Triangle Strategy, they have arguably a niche audience. Which is great by the by, I'd rather see Square Enix push games like these than trying to chase Call of Duty numbers.

Now, the big oddity is Guardians of the Galaxy, developed by Eidos Interactive which released to decent reviews. And you'd think that a game based on of the most popular IPs in the world would translate into sales numbers. But according to Square Enix, it failed to each expectations, similar to the Marvel's Avengers released in 2020. This could have many reasons, but its probably as simple as: The Audience probably doesn't really care about Marvel unless it involved the MCU.

But it's not all doom and gloom, previous years had been huge for Square Enix with some long awaited titles finally releasing, and this feels more like a buffer year in-between what could be an even more profitable 2022/2023. Just give Yoko Taro an unlimited budget and let him make a Final Fantasy already. What could go wrong? 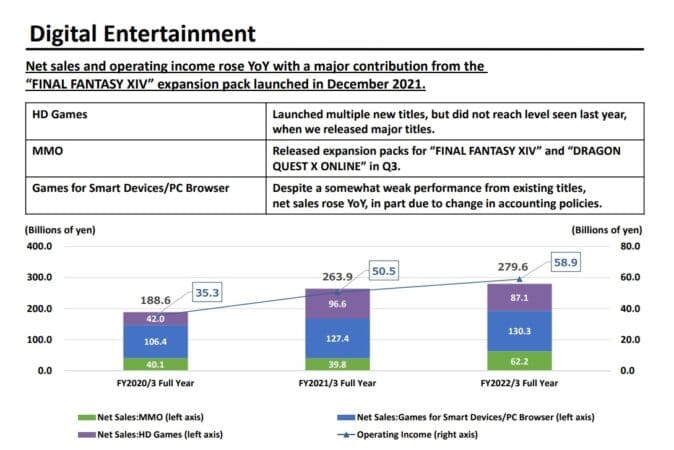 The MMORPG and Mobile Business

That the MMO market has been pretty lucrative for Square Enix as of late is no secret. Final Fantasy XIV continues to grow every single day. And with the release of an expansion and a boom in popularity, there is no end in sight. Of course this is the only factor that gave Square Enix MMO business a big boost. Dragon Quest X also released an expansion last year, a title that never an official release in the west. Final Fantasy XI is also still generating revenue which is nothing to scoff at either. Still, the MMO sector saw an increase of over 50% in revenue this past year. And with all of Square Enix MMO's demanding a monthly fee, its left to be seen next year with XIV's spike in popularity has any staying power. Especially without expansion sales being a lesser factor.

While there's no surprise with the amount of money the mobile sector generates. Which makes almost half of the digital entertainment revenue, it definitely drives Square Enix's business decisions. Especially their current interests in the blockchain and NFTs. While the genre of Gacha-Games is rarely talked about here in the west. These titles are massive in Asia. And combining them with the prospect of players actually having ownership over their inventory in those games, can seem very lucrative. And who knows… this might develop into an ecosystem similar to Steam's community market. With Square Enix profiting off transaction fees and generating those NFTs in the first place. 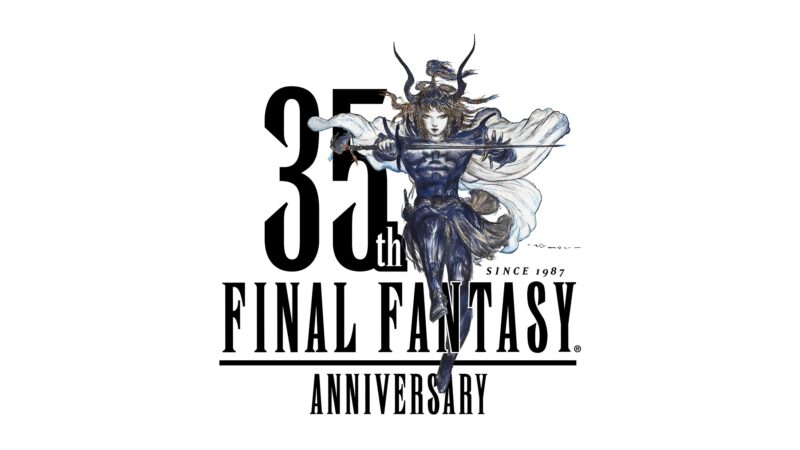 And What's to Come?

More games, hopefully. Square Enix states in their upcoming business strategy, besides wanting to invest in NFT's and other technologies, that they want to focus building out their current operation. Note that this article does not include their other media publishing and entertainment ventures. But they've also been doing pretty good last year. In terms of games, this means investing into their workhorse franchises. While also developing new IP's, especially for the NFT market. One of these new IP's is Forspoken, developed enlarge by the team behind Final Fantasy XV. The title is gonna run on Square Enix's inhouse Luminous Engine, but has been delayed to October 11. Initially it was planned to release on May 24.

Two other new IP's are The DioField Chronicle, heavily inspired by Square Enix's tactical RPG's of old. And Valkrie Elysium a fantasy action RPG. Aside from that there are currently a few mobile titles and another outing of the Star Ocean franchise on the way. Then without any dates so far, we have Dragon Quest XII and a Dragon Quest III remake in a style similar to Octopath Traveler. Recently Square Enix has also announced that they are officially working on Kingdom Hearts 4 and another mobile title for the franchise. Then there is part 2 of the Final Fantasy VII Remake, which we know next to nothing about. And Final Fantasy XVI, which has also been clouded in mystery. But we've already made some educated guesses about it here.

The Final Fantasy franchise has its 35th anniversary this year. In celebration of the franchise Square Enix has released Stranger of Paradise Final Fantasy Origins back in march. But they've also been teasing some announcements in the near future. Especially Creative Business Unit III boss Naoki Yoshida and Square Enix mainstay Tetsuya Nomura have been somewhat gleeful with information when being interviewed by our Japanese colleagues.