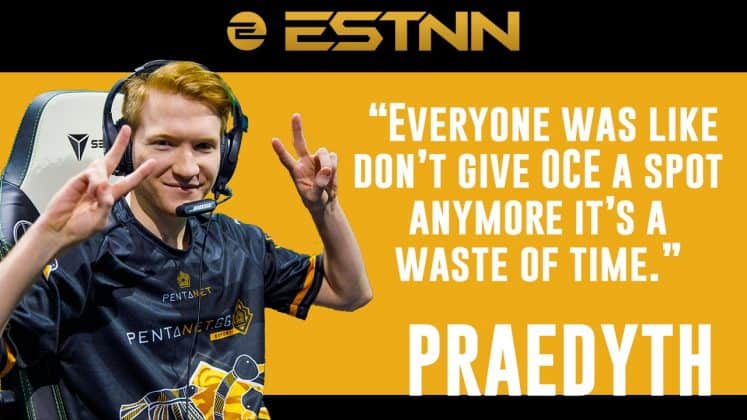 ESTNN had the opportunity to talk to Pentanet.GG’s AD Carry Mark “Praedyth” Lewis after they pulled off a comeback in the tie-breaker against the Unicorns of Love.

Pentanet.GG, the LCO 2021 Champions, crafted a whole new narrative after coming into MSI 2021. Even though Group A had only three teams due to the absence of the VCS representatives. It came down to the wire between Unicorns of Love and Pentanet.GG to secure second place in the group and make their way to the Rumble Stages of MSI 2021.

Congratulations on being the first OCE team to make it out of the group stages in MSI. It was a nail-biter, to say the least, but you guys pulled off a miracle comeback.
How do you feel and how is the team atmosphere right now?

It’s amazing. Coming to today, I was [thinking we were] probably packing our bags and leaving tomorrow. So I was kinda sad. I really hoped that’d perform well because we all believe in each other. Especially after the first match we lost against Unicorns, vibes were still out that we’re all good. Actually just making it is insane. It feels really awesome!

Let’s jump directly onto the matches. After you lost the first set of matches today, everyone thought that it’s almost for them. But you pulled off a miracle! What plans did you come up with to counter the likes of Unicorns of love and RNG to potentially push a tie-breaker?

I think some players just wanted more agency, like myself. I think I just knew I was a lot better than Unicorns of Love's bot lane. Not gonna lie, with the RNG games, it was just whatever. We #sendit comp as we just picked Qiyana we sent it. I picked Vayne in Game Four. But I think there was a little bug in my head, I probably shouldn't have picked Vayne against RNG GALA.

But yeah, the preparation was having agency in the lanes, stopping them from getting Rift Heralds in almost every single game and breaking our towers. We knew that if we are playing properly and trust each other, then we are gonna smurf it.

Now, Let's talk about your champion pool. You had diverse picks throughout the tournament such as Kog'maw, Jinx, Varus, Samira. Who do you think is the best champion for the ADC role in the meta right now?

I actually like the meta right now. You can basically play like four different styles, like you can go for Samira/Kai'Sa and go dive kingdom bot. You can do the classic Thresh lanes with Aphelios or Jinx. And you can play Kog-Lulu. Or you can just go for Varus-Karma and win the lane really hard by poking.

I think Varus really tops the meta right now. If teams want to play Varus, you really have to respect it as a champion. The champion in itself is like the best but it depends on if you want to play like Varus usually plays. It is very methodical, playing for poke and things like that. Like we would rather just play to fight for dragons and win that way.

So, I just told my team that I want to play melee Samira, Kai'Sa and if we get a really good Xayah match-up or whatever. Even though I haven’t played Xayah in two months it's a staple AD Carry.

Talking a bit about Pentanet.GG, most of the players like Pabu and Chazz have very deep champion pools as we witnessed in the MSI. Is that something that the team works on to pull a rabbit out of a hat and catch the enemy off-guard?

I don’t think it's a strategy or something. We all trust each other with everything. Like we saw Chazz pick Zed in champ select and I have never seen him play the champion in my life. But we all just … trusted that he will be able to play it. When Pabu says ‘Well pick me Udyr or Volibear’ then I am like “do you really wanna do that?” But if he says something like “Pick me Karthus” we’re like “yeah yeah, let’s go,” like we got this if he is playing these crazy champs. So I think like those off-meta picks, we encourage them.

It’s as exciting to watch as it is to play with them.

Moving away from the matches, I wanted to ask a bit about the team atmosphere right now. The team has a great taste for memes and always looks relaxed. You guys love having fun on and off the stage.

Are you guys always having this mindset to be casual, have fun and be yourself?

I genuinely hate everyone on this team. Every time I see them, I am just like- stop talking, please. I really don’t wanna talk to you right now. So, yeah we get on stage, I am like “Let’s win this fast, so I can stop talking to you guys!”. That’s the mentality.

Is scaling a myth?

From getting your first international win to qualifying from the group stages, what are the major takeaways for Pentanet. GG from MSI so far?

First, scaling doesn’t exist. You’re fighting early, no matter what. Fighting early, get ahead and you are winning. There is no such thing as scaling. So just like mass aggression, don’t be conservative. Fight everything you can, picking those champs [that let you do that]. We are playing to win and not to lose slowly. I think that is the biggest takeaway for me personally.

Also, I have a lot of confidence in me and PGG Decoy to play what we want and that we will perform when it matters.

Rising above the hate

Thank you for the interview. Lastly, the fans have been cheering for you and supporting your team throughout MSI. Raise the Koala {ヽʕ •ᴥ•ʔﾉ} is basically what they say. What is your message to the fans?

Honestly, there is so much support and there is also a lot of hate. But all the support outshines the hate. You know, when we were 0-3, everyone was like, “don’t give OCE a spot anymore, it’s a waste of time. I’m not watching these games. They’re pathetic.” So just having people close to us sending positive messages to us made it easier to lean on it overnight. Thanks to everyone cheering for us.