The second Team of the Week (TOTW2) of the year is here as FIFA 23 starts to release across the globe.

FIFA 23 was officially released on September 27th, when players who pre-ordered the Ultimate Edition received the full game, while EA Play 10-hour trials were also released. Tonight, we got the second Team of the Week of the year, featuring some excellent players. While we had the international break, this doesn't stop the TOTW from being released and allows us to see some players who may not regularly feature for their clubs.

With the game only a few days old, these early TOTW releases are often hotly anticipated, and the players within are highly sought after. We've included the starting 11 below and our pick for some of the most exciting players to watch out for. 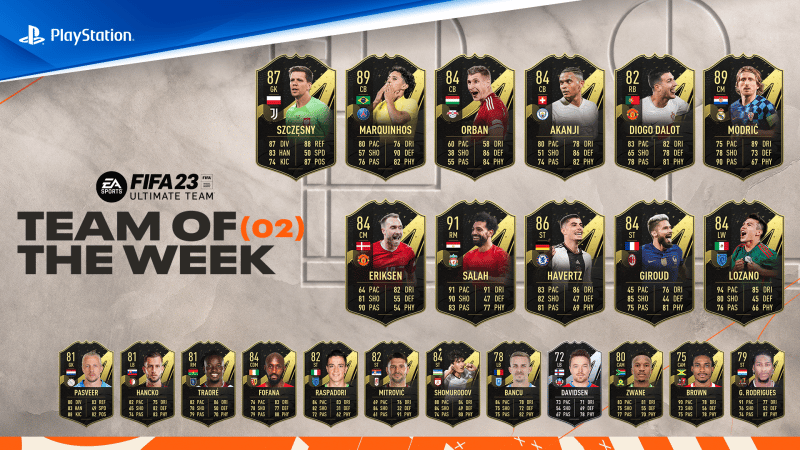 Team of the Week 2 features some incredible players who had excellent performances in the international break. The highest rated player in the squad is Salah at 91; Salah scored two in the first of Egypt's matches last week, getting him a well-deserved spot in the team. Despite not having the most fantastic start to the season at Liverpool, Salah's international form has come good here. TOTW 2 is an excellent time to get a card like this at the early stages of FIFA 23. While the new Chemistry System is still confusing new players, Salah is undoubtedly a valuable early 90+ rated forward.

Following Salah comes Modric and Marquinhos, both at 89 rated. Modric picked up one goal in Croatia’s 3-1 victory over Austria this week, while Marquinhos scored and kept a clean sheet in Brazil’s first match of the break.

Havertz is an excellent addition to this TOTW, having his card as a Striker. This allows him to fit better into some Premier League or Germany-focused Ultimate Team squads; however, he can be converted back to a CAM if needed. Havertz earned his spot in the team through two goals in Germany’s 3-3 draw with England this week.

Our final player to watch is Akanji, who could be a great addition to Premier League Ultimate Team defenses. Akanji started Switzerland’s international break with a goal and assist in their 2-1 win over Spain. With 80 pace, 86 defending and 82 physical, this could be a sought-after card that comes with a high price.

Best of the rest, Christian Eriksen. While his pace of 64 is low for the engine room of a team, his 90 passing is sure to shine. With good dribbling and shooting, if you can find space for Eriksen outside the box, he could be a real diamond in the rough.

When will TOTW 2 be released?

TOTW 2 will be released at 6:00 pm BST, while TOTW always is released at the same time. If you want to catch it the second it drops, EA always puts out a post on their social media channels when the new TOTW drops.

If you're new to FIFA 23 and need some help. Our Camera Settings guide might have what you need to improve your fortunes online. FIFA 23: Everything you need to know about FUT World Cup How to Make Players ‘Lengthy’ in FIFA 23 – Best Lengthy Players Ted Lasso and AFC Richmond to Feature in FIFA 23