Here we are with the first tiebreaker for Day Three, as Beyond Gaming and Unicorns of Love fight for survival at Worlds 2021.

Tiebreaker: Beyond Gaming vs Unicorns of Love 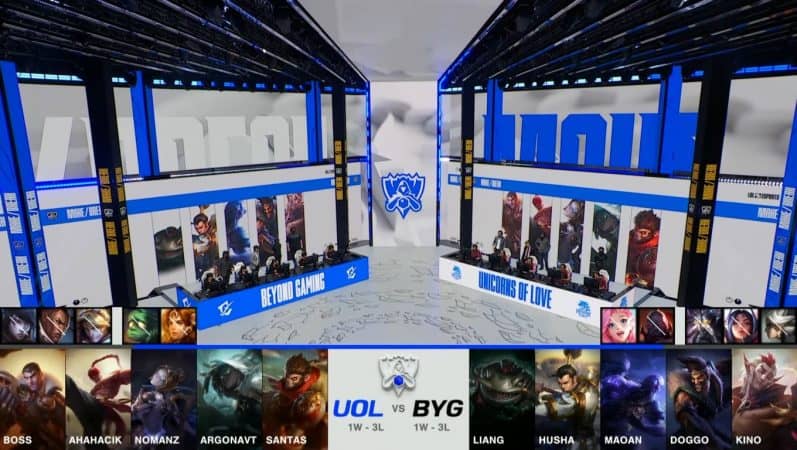 The match started very slow, with both teams playing defensive in the early game. Beyond Gaming secured the first dragon of the match and teamed up in the top to get First Blood on the enemy Jayce. Next, Kino's Rakan took a bad engage under his tower which led to an easy kill for BYG as Draven gets his stacks cashed. Then, Unicorns of Love initiated a gank in the top lane on Liang, however, he outplayed them under the tower and got two kills for himself. After that, Maoan’s Ryze overextended a bit into his jungle and was punished by the enemy jungler to secure UOL’s first kill of the match.

Meanwhile, BYG secured the second dragon of the match. BYG looked to dive once more in the bottom lane while cracking the outer turret, however, UOL retaliated and secured two kills for themselves. While UOL managed to get another kill, the next major team fight took place in the top lane where both the teams lost the same amount of players in a messy fight and it equaled the kill score.

BYG and UOL hanging by a thread

After that, BYG maintained their objective control and got the third dragon of the match. Beyond Gaming started pressuring the side-lanes, and took a great team fight in the mid lane forcing UOL to retreat and, seeing an opportunity, started the Baron. However, they couldn’t finish the Baron in time as Unicorns of Love came in rushing to steal the objective and come back into the match. Then, they secured the next dragon for themselves to delay the Soul dragon.

It seemed that UOL found their footing now. They won the next team fight as well, although BYG rushed to dragon after their respawns to secure the Soul for the team. After that, BYG pushed all the waves and quickly killed the Baron to come back into the match and pressure the side lanes. As a result, UOL was spread thin across the map and BYG pushed through the mid lane and forced team fights. While BYG couldn’t outright win the fight, they did manage to take down key members which allowed them to end the game and send UOL home.