Japan's DFM and NA's C9 fought for a direct ticket to the Worlds 2021 Main Stage. 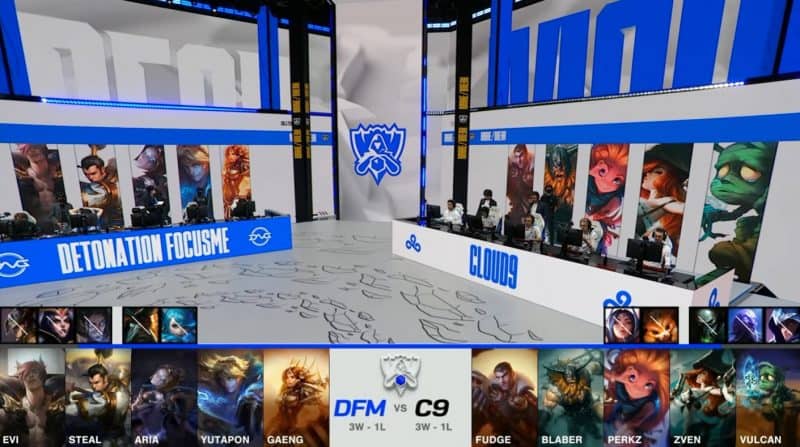 Riding high on the hopes of their regions, DFM and C9 were ready to settle it on the Rift for a direct pass to the Main Stage. It all started with DFM though, as the DFM bottom lane duo killed Vulcan for First Blood in the 2v2. A few minutes later, DFM moved four bottom to once again kill Vulcan, and this time, Zven too. However, C9 wasn't going to simply lie down and die. They took a dragon, a Rift Herald, and dove Aria under his tower to kill him off.

A messy team fight broke out in the top lane at 12 minutes, where kills were traded back and forth for about a minute, where C9 came out slightly ahead. Shortly after that, C9 grew their lead with a third dragon after slaying three from DFM. A few minutes passed, then the teams met for the potential Infernal Soul dragon for C9. Crucially, DFM found a winning team fight at this point and claimed the dragon for themselves, stopping the Soul.

On a knife's edge for first in Group B

Once again, the game stalled as the teams waited for the next dragon. Inevitably, the teams clashed, but this time DFM smashed C9, cleaning up three C9 members while losing none of their own. Although, the two remaining C9 members secured the Infernal Soul as DFM opted for Baron. Unfortunately, DFM couldn't get much done with this first Baron, so it came down to a 33 minute team fight around the Elder Dragon.

C9 had the setup on the objective and tried to leverage their poke, but DFM wasn't afraid. They marched right in and engaged a fateful team fight, where they obliterated C9 off the map, taking down three from C9, then the Elder Dragon, then the Baron too. With the Baron buff, DFM was a rushing tide, sweeping over the bottom lane and diving into C9's base at the Inhibitor. Against the force of DFM, C9 was helpless, and lost several members in their base while DFM rampaged through and destroyed their Nexus.

After this incredible win, DFM has claimed their spot in the Worlds 2021 Main Stage and are the first team to do so in the Japanese LJL's history. Meanwhile, C9, who looked to strong before today, must fight in the Play-in Knockouts to make their way there.