TSM and Fnatic continued the long-fought battle between NA and EU during the first day of Groups. 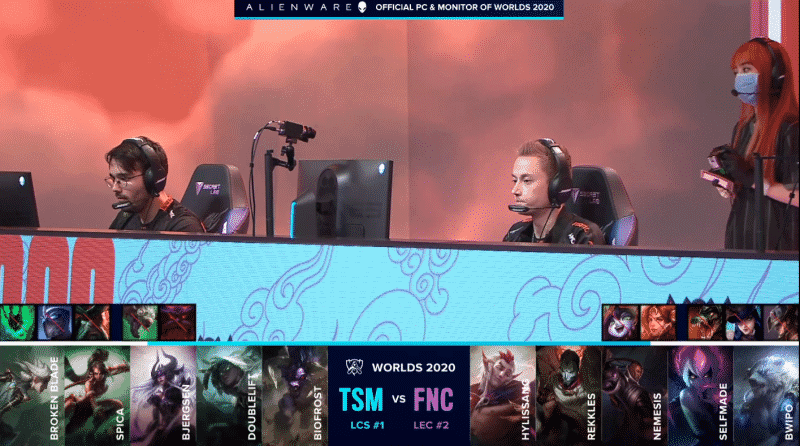 To wrap up Day One of Groups, Fnatic ("FNC") took a critical win over TSM. Like a few other games today, it started at level one, as FNC invaded TSM's red side to kill Biofrost for First Blood. Knowing Biofrost's Flash was on cooldown from that, Selfmade ganked bot to get him killed again. The match looked even better for FNC when Bwipo solo killed Broken Blade in a 1v2 against him and Spica.

But TSM soon started to make moves too. Bjergsen roamed top to help Broken Blade get a revenge kill on Bwipo. Plus, Broken Blade made a 1v2 play of his own to kill Selfmade, though he did end up dying for it. Once in the mid game, the kills slowed down while the teams focused on chipping away at towers. Besides for a one-for-zero TSM team fight win at 24 minutes, the teams were careful not to overstep. TSM might've been a bit too careful though, as at 26 minutes, FNC rushed the Baron and secured it, losing only their support afterward.

During FNC's siege, Selfmade shot a hole right through TSM's defense by Flashing and brutally killing Doublelift's Senna. In the following minutes, TSM lost a few towers and a middle Inhibitor. Not able to end the game, FNC decided to wait for Baron from here. At 32 minutes, they found a kill onto Broken Blade, then claimed a second Baron. FNC then chased TSM down, using Bwipo's and Nemesis' Teleports to flank and obliterate TSM. They Ace'd the NA representatives before closing in and taking their Nexus.