With Play-ins now over, it’s time to lock in the 2020 Worlds Group Stage teams.

While we had some idea coming into Play-ins where sides would end up, we now have a full breakdown of the 2020 Group Stage group composition. Below we’ll briefly highlight each of the four groups and the teams that will make up those spots. 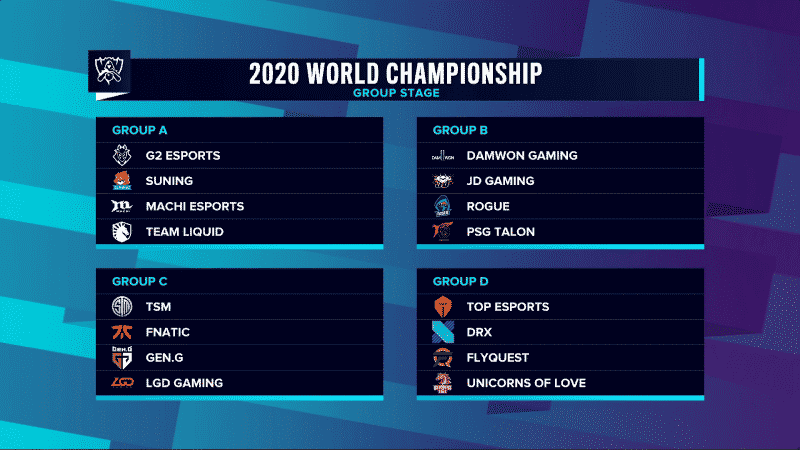 Group A is a solid group, but one that most people already feel they know the result of. G2 Esports and Suning Gaming are likely the two favorites, though Team Liquid can certainly spring a surprise with a number of Worlds experienced players on their roster. Team Liquid went almost unbeaten in Play-ins, making them a good shout for Group Stage qualification. It’s likely that their matchup against Suning is going to be a deciding factor, alongside not slipping up against Machi Esports, who despite being the least likely side to qualify, could spring an upset.

Group B is probably the group of death. With some of the best teams in the world in the group, featuring DAMWON Gaming, Rogue, JD Gaming, and PSG Talon. For NA fans, they’ll be glad Team Liquid never ended up in Group B, however, with TL put into Group A instead, it’s hardly going to be an easy ride for them also. PSG was the play-ins side drawn into the group and they certainly look good for their spot. While they qualified first, they did so with a partially subbed roster, with the expectation that they go back to their full starting roster for Group Stage. Sadly for PSG, they face one of the toughest groups at Worlds, and with only two spots available they’ll be outsiders.

Group C was the only group that was fully confirmed before the draw was made. TSM, Fnatic, Gen.G, and LGD. On paper, it looks like one of the more even groups, with any combination of team qualifications being perfectly viable. LGD have an advantage over the other in that they’ve played already, however, the other sides in their group have had a week to watch them play and analyze their playstyle, which could give them the upper hand. LGD will play Gen.G first on day one of the Group Stage, so it won’t be long until we get an idea of how Group C plays out.

Lastly, we have Group D. Sadly for DRX, FlyQuest, and Unicorns of Love. Someone had to be placed with Top Esports and it just so happened to be these three teams. Group D is already shaping up to be the battle for second place, with Top Esports the favorites to win the entire event, they’ll be expected to get out of the group fairly easily.

How’s the LCS and LEC looking?

If we’re being realistic, we’d expect the LCS and LEC to send at least two teams through the knockouts. G2 should be nailed on, with TSM and Fnatic likely fighting it out for the next place. Team Liquid or Rogue will need to show up to make it out of Groups, and it would take something pretty special for all six sides to make it out of Group Stage.