Everything you need to know about Thresh, the Chain Warden.

There are few supports, or champions in general, as cool and as popular as Thresh. No matter what ELO you're in, you'll see Thresh in your games, and that's for good reason. He has a well-rounded kit that gives him many options on how to play in-lane, out of lane and in team fights. Aside from his gameplay, he's simply an awesome-looking champion with a great design, fantastic skins and interesting lore. Whether you're an aspiring Thresh player, desperately need a counter against him, or are a lore-nut, there are plenty of reasons to learn about one of LoL's best-designed champions. 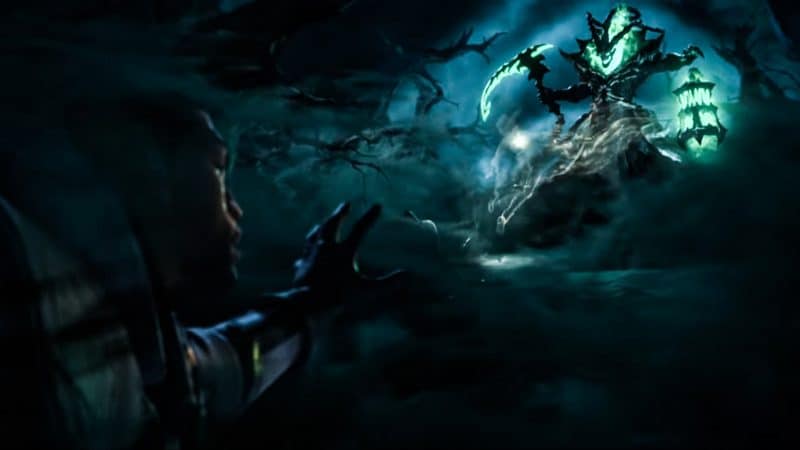 Thresh's story is truly a twisted one. Long ago, he was a normal human who lived in the Blessed Isles and worked for an order that collected and studied arcane knowledge. He held a rather lowly position, and due to his cruel personality, he had been given the task of stewarding dangerous artifacts underneath the city of Helia. But Thresh knew that this position was to keep him away from people, so malice thoughts corrupted him as he spent years alone, in the dark vaults. He felt like he was pushed away, and despite his ability, denied the recognition he deserved.

Eventually, his opportunity for greatness and revenge came when Viego led his armies to the Blessed Isles. Viego was there to resurrect his dead wife, Isolde, with the Waters of Life. The problem was, he had no idea where they were. Fortunately for him then, he met Thresh, who betrayed his homeland and his people to aid Viego, hoping this would give him the recognition he thought he was long overdue.

Soon after Viego lay his dead wife in the Waters, the entire Blessed Isles were swallowed by the Black Mist of the Ruination. Everyone was killed by it. But none of their souls could pass on to the afterlife. While most people's souls and minds deteriorated, Thresh flourished as he was free to torture souls he collected and grew his power.

During his reign of terror, he entrapped Senna's soul and Lucian chased Thresh for years to save his wife. The sadistic Thresh enjoyed every minute of the chase, and though he did end up losing Senna's soul in a showdown with Lucian, he still relishes the cruelty he can inflict on anyone he wants, with no threat of repercussion. He continues his dark work whenever he goes and is a true menace to all of mankind, as is all of the Mists. 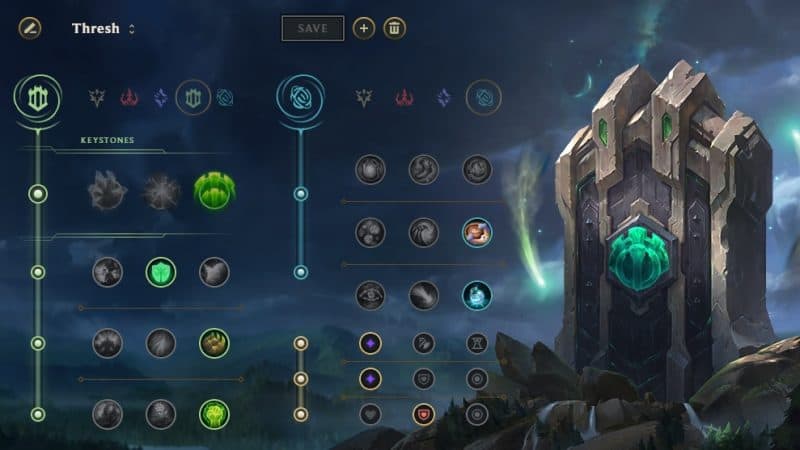 With Thresh, players have some options with their runes. Now, Resolve and Inspiration are very standard, but the keystone is the main changeable part. As shown above, Guardian is an excellent option and has a higher win rate. However, Aftershock is used more by the wider player base. This keystone choice is very important and dependant on the lane matchup. Essentially, in losing lanes where you expect to be poked or have a weaker ADC, Guardian is ideal. Aftershock, then, is for lanes where you're able to play more aggressively and look for more kills. On Thresh, you'll be wanting to do this more than sit back and wait, which explains the higher play rate.

Some less-important options players have are between Overgrowth and Unflinching in the Resolve tree. Honestly, choosing one is more of a preference thing, so feel free to experiment with both. Another very preference-based choice is in the mini runes. If you want more damage for the early laning phase, double Adaptive Force minis are helpful, while a Scaling CDR and an Armor mini are chosen for tankiness and utility. It depends on how you want to play really. 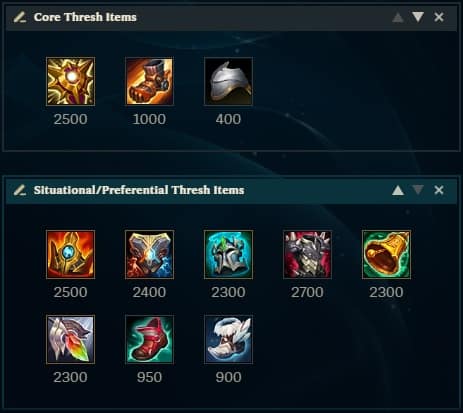 Thresh is a very unique champion that is on the tankier side but isn't simply a meat shield like Braum or Nautilus. With his long-range hook, life-saving lantern and his Box (R), he has great peeling tools and is useful in both the front and backline. With this considered, his build has decent versatility for a support.

The main Mythic item Thresh players enjoy is Locket of the Iron Solari. That's because it gives him strength in both the frontline and backline area, with more tanks stats and a shield to help allies stay alive. On the other hand, if his team lacks engage, Shurelya's Battlesong provides a potent speed-up that lets Thresh and his allies get into range. But Shurelya's doesn't provide much in the way of tank stats, so it's a bit more dangerous sometimes and should be used only in certain circumstances.

After the Mythic, item buys should be thought about carefully. Zeke's Convergence and Knight's Vow are valuable as they help Thresh keep his ADC alive or output more damage. In addition, these two offer more tank stats for Thresh to play with, playing more into the engage-oriented playstyle. But Mikael's Blessing and Redemption slot better into the peel-oriented Thresh, as they make him relatively easier to kill but have team fight and game-changing active effects that are situationally powerful.

Finally, Mobility Boots are a staple on Thresh since they give him the power to roam out of lane, but Ionian Boots of Lucidity and Boots of Swiftness are viable options too. Thresh is generally a great champion, but like any in LoL, has champions he just hates to play against. And most of these champions fall into the mage category. So long as they don't die to the first couple of Thresh hooks, mage supports can poke Thresh and his ADC down and they deal too much damage for Thresh to keep up with in the lane. Vel'koz, Brand and Zilean are great examples of this, as they can stay out of Thresh's effective range and still output damage. Zyra is perhaps the best though, as she has some easy CC, great damage and can block Thresh's Death Sentence (Q) with her plants.

One of the most classic counters to Thresh is Morgana. With her two CC abilities, she can peel away from Thresh's engage, or negate a large part of it with her Black Shield (E). Another decent pick is Swain, though for different reasons than other mages. Sure, he can have some decent poke, but his abilities are shorter range than some others mentioned. His strength shows at level six when he has access to his Demonic Ascension (R). When Swain ults, it's pretty difficult for Thresh to do much to help his ADC kill him. Overall, the damage-oriented mage supports do well into Thresh but be sure not to pick enchanters into him, or you'll be in for a bad time. 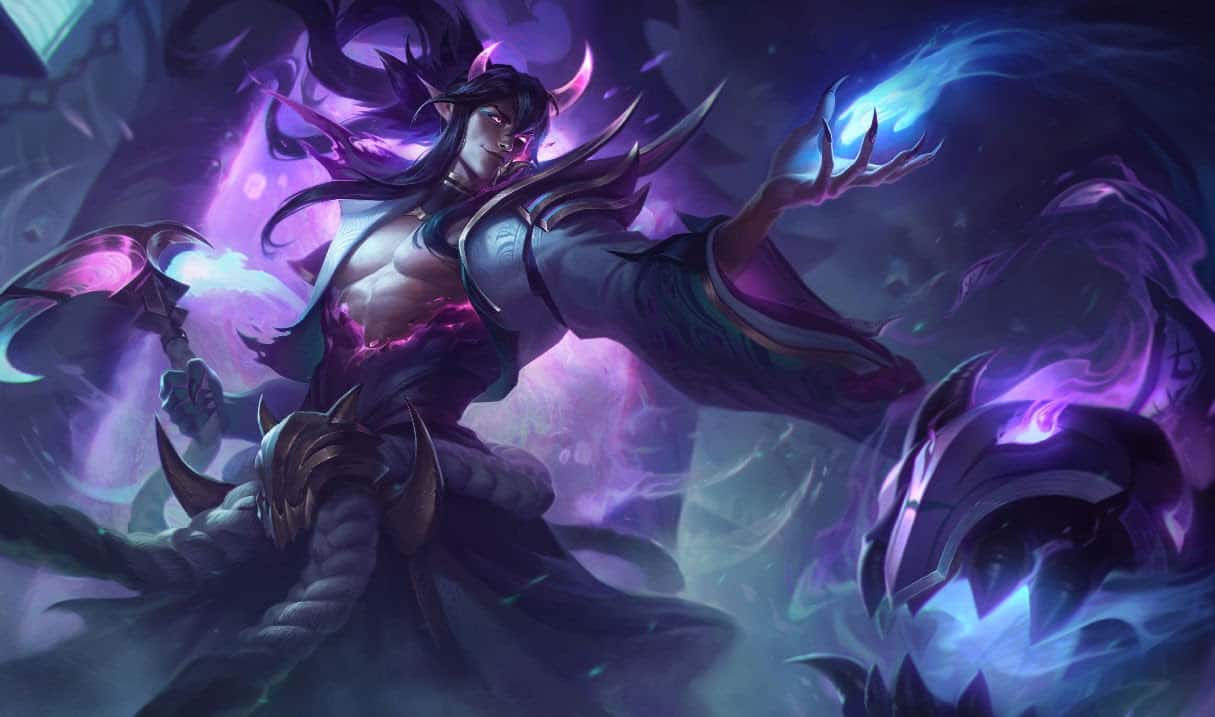 Thresh has been in LoL for a long time and has always been fairly popular, so by now, there is a good variety of skins available for him. The full list is below, with links to pictures of the splash arts embedded in the name. If you want to see them all together, with Chromas and in-game models, check out the League of Legends Fandom page.