The first of two tiebreakers first up was TL vs GEN, where the winner would be guaranteed a spot in the Worlds 2021 Knockout Stage, and the loser would head home. 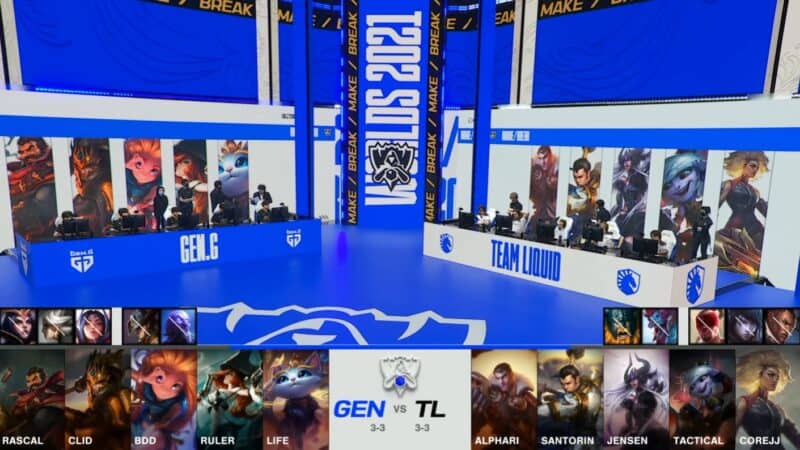 This crucial game didn't start off like TL would've liked. First Blood was picked up by GEN in the mid lane, as TL wasn’t able to get anything else on the map. However, TL rebounded and made it onto the board by securing a kill around a drake fight, though the drake remained alive. A top lane gank was next for TL, as they committed four members to the dive before moving to secure the Rift Herald. Tensions are tight, and as we moved firmly into the mid game by the 17-minute mark, the gold was even with both sides slowly taking advantages on the map.

TL secured the next drake, but on the tail end of the fight, GEN did manage to claim two massive kills to move themselves ahead in gold. It all started to go wrong for TL, with Bdd looking far too strong on Zoe, as he managed to pick off members of TL regardless of where they decided to hide. Despite his amazing picks, TL did manage to get a shutdown off of Bdd when he was caught out in their jungle. Then, Alphari looked set to get a 1v1 outplay onto Rascal, but he lost before the rest of GEN turned up to secure two kills. After that, GEN fought for the Baron, and despite Santorin being dead, Jensen was able to steal away the Baron.

With Baron, TL wasn’t able to knock down a significant amount of the GEN base. With the buff fading, GEN managed to siege the top side of the TL base and knock down the Inhibitor Tower. Mountain Soul was secured for GEN as TL couldn’t deal with the poke. No one from TL fell but with multiple members resetting, GEN were given a free Baron. With buffs on their back, GEN looked to end the game. With the base ripped apart, TL lost two members and it was over for TL. It was a near loss for TL, but with that loss, they're head home. GEN moved on to face the winner of the next tiebreaker.