Coming into the series, it’s one that T1 will be clear favorites to win. Hanwha Life surprised many by making it out of their group, especially considering the quality of the group. Now, they face their biggest challenge to date. Sadly for Hanwha, their most recent Bo5 against T1 ended in defeat for them, though it was a close 3-2 series. Has Hanwha Life shown enough at Worlds to reverse their fortunes, or is T1 a step too far? 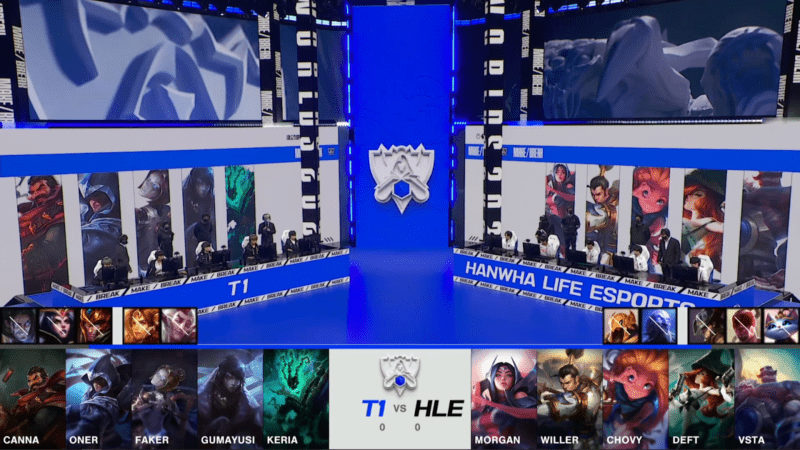 It took until the 7:50 mark, but T1 were able to pick up First Blood through a three-man gank in the top lane and secure a 1k gold lead. However, HLE got a kill back on the top side of the map after T1 failed in a 3v2 fight. HLE picked up momentum across the lanes as they reduced the gold deficit. Very little else happened as the game moved into the 16-minute mark, with both teams just pushing lanes. A minute later, it was HLE that started the first 5v5 engagement, which began with a kill but ended in them losing three members.

Once the flood gates had opened, it was all T1. Claiming a drake and three more kills, T1 had suddenly found themselves 3k gold ahead, with Baron spawning onto the map. More control went over to T1, and having been in the lead already, T1 claimed the Baron. HLE, however, managed to drop three members of T1 in the ensuing fight, taking three Baron buffs off the map. Next, T1 postured for a fight around the drake, and despite HLE attempting to steal, T1 secured it as they began to siege the HLE base.

With their gold lead at 8k by the 32-minute mark, T1 began another siege on the HLE base. With two Inhibitors down, the members of HLE fell quickly as T1 stormed the base and made it look easy in the mid to late game. It was a big first game win for T1, while HLE needed to learn lessons quickly to stay alive in the series. 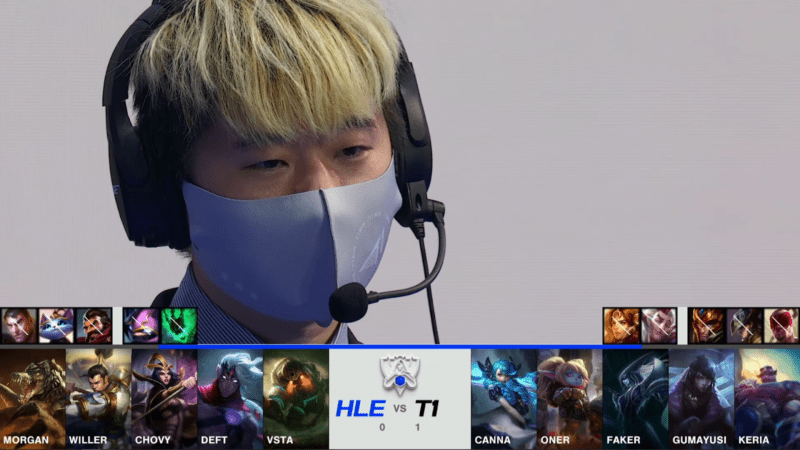 Game Two was another slow starting game, as the first skirmish wasn’t until the Rift Herald at 9:40. It took another 30 seconds of posturing around the objective for First Blood, and like game one, it was T1 that claimed it. Despite the lack of kills, T1 had already secured a 2k gold lead with superior early game moves. T1 continued their early lead, picking up another three kills in the next fight, with Baron spawning shortly after on the Rift. At 5k gold ahead by 18 minutes, T1 were fully in control.

T1 picked up another drake, putting them into pole position for Soul point if it were to come to that point. Though, as Baron spawned on the map, T1 looked too far ahead already for HLE. T1 picked up three more kills for one in return, as Baron was secured and T1 moved to 7k gold ahead. HLE traded one-for-one in a jungle fight, despite having a man extra, as T1 continued to push down the HLE top lane. T1 once again forced a Baron, and with HLE unable to really contest, T1 picked up an Ace.

With this, T1 rushed down the HLE base and secured a quick 30-minute victory, moving onto match point as they dominated the series. HLE looked completely out of the series, with everything to do if they wanted to stay at Worlds. 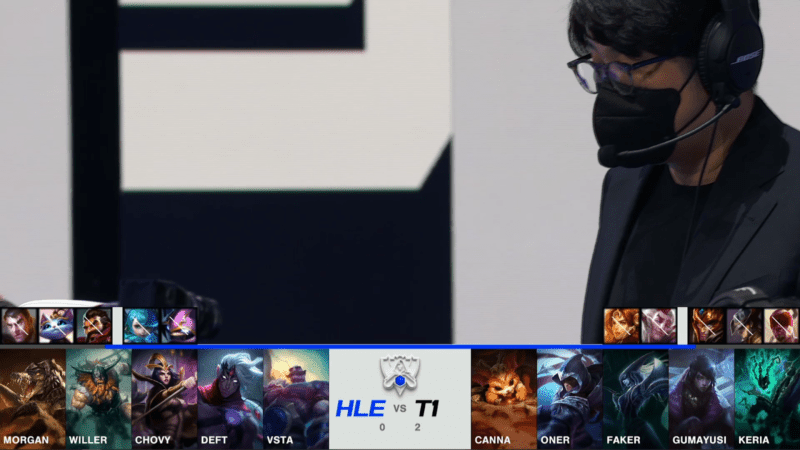 In the match point game, it was another late First Blood, as it took until an 11:30 tower dive for T1 to finally secure it. That First Blood, however, was just the icing on the cake for T1, who were already 2.5k gold ahead. It’s a typically calculated T1 performance thus far, another four minutes had passed and T1 were still starving HLE out of any opportunity to earn gold. HLE moved to claim Rift Herald, but T1 managed to steal it while claiming four kills after the objective as HLE already looked down and out.

More control over the map for T1 as they continued to dominate across the Rift. Moving to 6k gold ahead, they began to push out lanes ahead of a Baron fight. For HLE, it looked like it would take a mistake or a miracle steal to even get them back into the game, let alone the series. When T1 started up the Baron, HLE attempted to go for a steal, but it wasn’t possible, as T1 claimed it before cleaning up the fight. HLE were Ace'd with T1 resetting across the board before looking to end.

T1 advanced through the bot lane as HLE prepared a Hail Mary to keep themselves alive in the game. T1 continued their slow push before claiming the bot lane Inhibitor and spending more gold. Afterward, Baron was secured for T1, who then chased HLE across the map. It was the best fight HLE had this game, but even then it’s not enough, with minions destroying their base. With just a little more effort, T1 secured the 3-0 victory to send HLE home.