Two top dogs face off in the first match of Day Two. 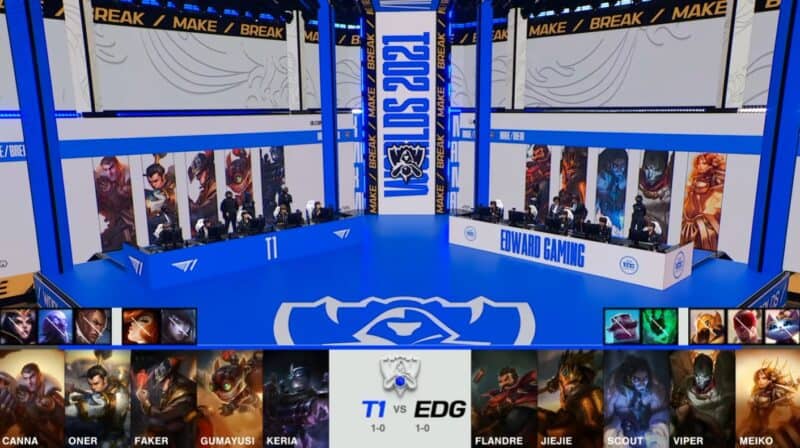 It was a fairly LCK vs LPL start to a game, as by the eight-minute mark, we finally got our first fight around an objective. It went over to EDG after they were able to pounce onto T1, get First Blood and claim the Rift Herald. Funnily enough, the next major play was another team fight around the Rift Herald. Again, it went the way of EDG early as they picked up a kill, and despite T1 trying to punish the low HP bars, EDG came away ahead. Picking up two kills and a Rift Herald, EDG moved to 2k gold ahead.

T1 got onto the board on the bot side after EDG went in for a dive. Although they got the first kill, the fight went the way of EDG once again as they continued to move ahead. Now cresting 20 minutes, EDG moved to start the Baron, and while T1 got no kills from it, they were able to stop the Baron from happening. T1 then flipped the play and started attempting to take the buff for themselves. EDG tried to steal it but T1 were able to claim it. In the ensuing team fight, three members of T1 dropped, with EDG losing two.

While it wasn't ideal, it kept T1 alive in the game and crucially slowed down EDG. After that Baron buff expired, it was once again T1 that pulled the trigger on the second Baron engagement while EDG were busy on the Drake. It backfired though, and EDG were able to pick off Faker and claim the Baron as T1 retreated.

EDG pushed in the T1 base at the 33-minute mark, claiming the mid lane and bottom Inhibitors. They walked away unpunished as T1 looked flustered. With the top lane Inhibitor the only one left, EDG postured around in, pushing in all the lanes and trapping T1 inside their base. EDG forced the push into the Nexus towers but once again moved away with the Elder Drake spawn. Sadly for T1, they make the game-winning play for EDG, as Oner is caught out and killed. With this, EDG collapsed and knocked down the rest of the roster. EDG moved to 2-0, as the LCK ended its unbeaten run.