After finally qualifying from the Play-in Stage, DFM has the monumental task of facing legendary organization T1 in their first match of the Group Stage. 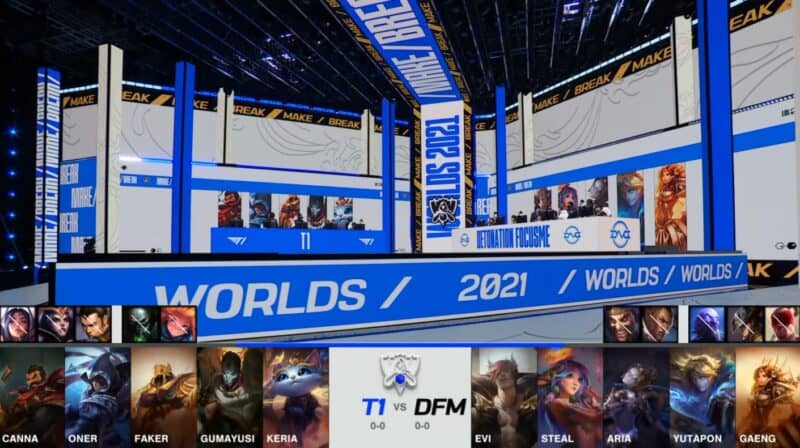 These teams had very different expectations today but both wanted to start their group stage off with a win. But this match was all T1 all the time. The action started in the bottom lane 2v2, where Gumayusi and Keria fought the DFM bot duo to killed Yutapon for First Blood. A few minutes passed, then a skirmish in the top side broke out, with T1 once again coming out ahead, this time with two kills plus a Rift Herald. Two minutes later, both junglers met in the top lane, where the 2v2 went, of course, in T1's favor with a two-for-one trade.

Even early on into the game, Keria's Yuumi was everywhere, often roaming around with Oner's Talon. The duo ravaged DFM and shut Steal right out of the match. DFM Aria was holding it down in the mid lane for a long time, but he was inevitably killed under his tower at 10 minutes. At this point, the gold lead ballooned to 5k and DFM appeared out of it already. For the next few minutes, T1 played with their food. They found more kills across the map and took towers with ease. At one point, Oner and Keria essentially 2v4'd in the enemy jungle and base to kill four from DFM without dying themselves.

Baron would never grace the Rift as T1 stormed into the DFM base at only 17 minutes. It took them a couple of minutes and a few pushes, but T1 soon knocked down all of DFM's Inhibitors. Sending it in one final fight, DFM couldn't find the miracle fight and had to watch T1 slaughter four members, and ultimately, their Nexus. Finally back on the World Championship stage, T1 showed why they're a true threat right out of the gates.