The real battle for second place in Group B. Both teams needed a win here to make their bid for top two easier. 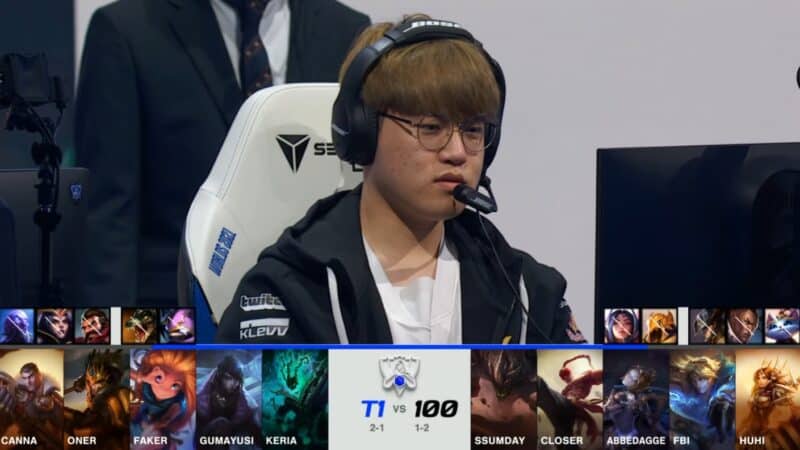 With both of these teams wanting to claim second place in the group, a win was necessary here. Feeling the pressure, Closer tried to gank top at three minutes, but when he went in, Faker and Oner almost instantly collapsed on the play. To his surprise, it was Closer who was then caught and killed for First Blood. But that didn't deter 100T. A couple of minutes later, they sent four to the bottom side to dive the tower. It ended up turning into a 4v4 team fight, where 100T narrowly came out ahead with a three-for-two kill trade.

However, after this, T1 turned it up a notch. They started choking 100T out of almost every play, and made a good amount of headway when they won a 3v3 in the top side one-for-zero and used the Herald to take the First Tower bonus. While the game slowed down on kills for the time being, T1 didn't slow down on taking objective after objective. Another Herald, multiple towers and a couple of dragons all fell in T1's favor by 22 minutes.

At this point, both teams poked and prodded at each other, but no one made any big moves. That was until 28 minutes, where 100T pushed T1 away from dragon and secured it, but lost track of Baron. Rushing it down, T1 claimed the Baron buff for free. For the 100T composition that relied on 5v5 team fights, this was bad news, as T1 started pressuring their Inhibitor Towers. As they did, 100T tried to pull off their engage wombo-combo, but it failed horribly. The engage whiffed and T1 turned the fight around, killing four 100T champions before swiftly pushing in and taking the Nexus.