Everything you need to know about Seraphine, the Starry-Eyed Songstress.

The ever-growing roster of League of Legends champions welcomed Seraphine in late 2020. She burst on the stage and instantly stole the limelight with the rest of the K/DA lineup. Seraphine is a beautiful champion with a fun style and kit that many would enjoy. With a unique buildup to her release, she's pretty unique lore-wise too. So whether you want to learn how to play her or are only here to find out how to play against her, there's plenty of reasons to learn more about Seraphine! 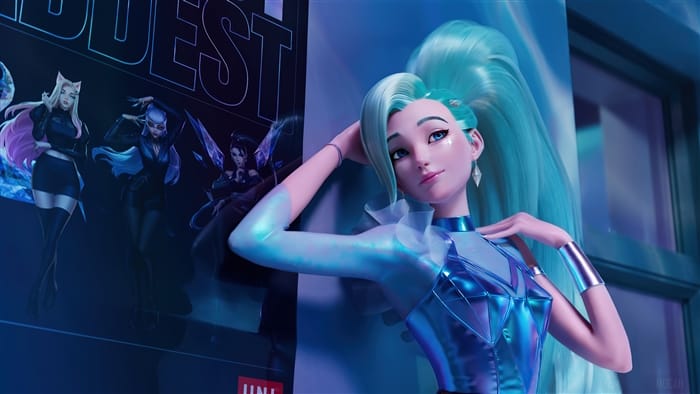 Seraphine was born in the prosperous city of Piltover, from parents who hailed from Zaun and worked hard to make a life for themselves in the city above. They worked in a sort of instrument repair shop, so this, along with her natural love of singing, made her a true music lover. She would often sing from her window to the streets below, mixing her song in with the cacophony of voices of people going about their days.

Somewhere along the line, she developed a power to hear the thoughts and emotions of people. This was overwhelming for her, as she heard all the good and the bad, the conflict, the desire, and the inner thoughts of people all around. In pain, her parents bought her a rare hextech crystal to suppress the voices she couldn't help but hear. It worked and all the voices were blocked out. Besides one.

An ancient brackern spoke to her and guided her from her fears and insecurities. It told her of a distant land and conflicts a thousand years old, inspiring her. With the push of the ancient voice, she began to learn to control her powers and use it to sing to people, to their souls. She sung in Piltover but always felt like something was missing. So she went to the undercity of Zaun.

Here, she heard the voices of the oppressed and the hopeful. Of those who resented Piltover above. She soon learned that Piltover and Zaun were very fractured and wanted to become a unifying voice for the people in both places. She used the hextech crystal to amplify her gifts, not to suppress them, and began singing to the people of both cities. With songs of hope and unity, she brings people from Piltover and Zaun together in her hugely popular concerts and makes sure everybody's voice is heard. 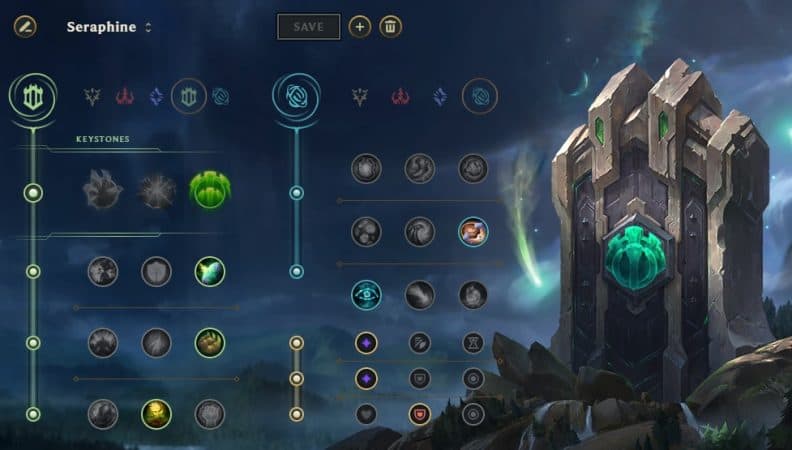 The first rune page for Seraphine is all about survival. Guardian and Bone plating give her damage mitigation and helps her survive lane. Because of her relatively weak laning, her main goal is to not give up leads to enemies and make it to the team fighting stage. The Inspiration tree gives her Biscuit for the lane, with Cosmic Insight for general utility. Revitalize goes a long way for Seraphine as well, giving her extra healing and shield power, which is her bread and butter.

The main draw of this rune page is the protection it gives in the laning phase. Guardian, in particular, is great for both Seraphine's and her ADC's survivability. It has decent scaling too, meaning even in later game team fights, it can make a big difference between life and death. But if you don't feel like you're under too much kill pressure, there's another rune page you can run. 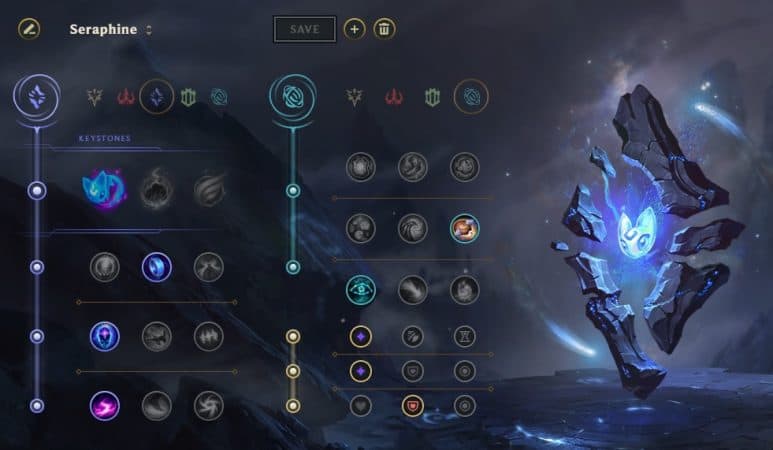 Utilizing the Sorcery tree primarily, this rune page gives more damage to Seraphine. She is a mage and has some poke damage, so things like Summon Aery and Scorch can be annoying for enemies if applied consistently. Aery also double up for her, since it improves her shielding prowess too. Manaflow Band is very nice for keeping up on mana, which is never a bad thing. Finally, Transcendence helps her reduce cooldowns and scales pretty well.

The rest of the rune page is kept the same for consistency. Though you will be easier to kill, this rune page helps you to apply lane pressure, which she can struggle with with the Guardian page. Make sure to keep both of these options in mind in the pre-game lobby! 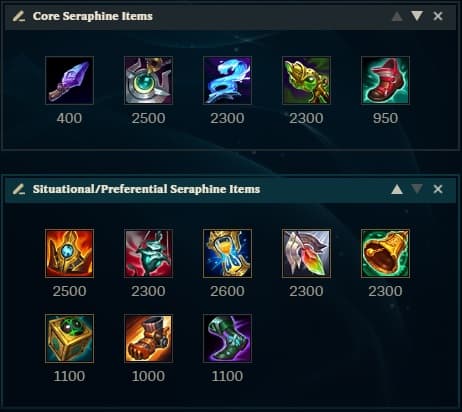 As primarily an enchanter support in her current state, her build is crafted to augment her shielding and healing abilities. Moonstone Renewer is a powerful item in her hands since her passive and AOE abilities allow her to proc it easily. After that, Staff of Flowing Water and/or Ardent Censer is fantastic. They both give you more healing and shielding power, which is great in itself, but also more damage stats for allies. Ionian Boots of Lucidity are nice for spamming more abilities, while Chemtech Purifier is important in nearly every game for cutting down enemy healing.

Outside of the core, Shurelya's Battlesong is a viable option for Seraphine too. If your team needs a speedup to engage or avoid certain enemies, it's an option to keep in mind, but not quite as good as Moonstone Renewer overall. After all that though, there are many options. Zhonya's Hourglass gives damage and the anti-burst stasis. Redemption gives a semi-global, AOE heal. Mikael's Blessing can get you or allies out of potentially brutal CC. Lastly, Watchful Wardstone is handy for the vision-focused ward savants out there. 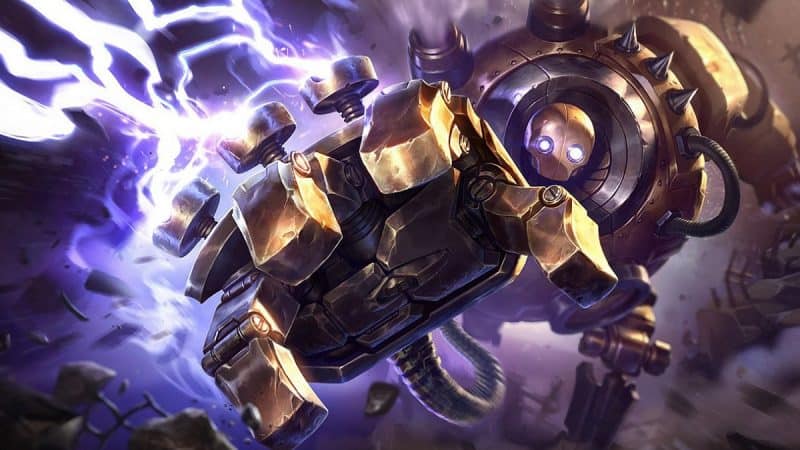 Being an immobile enchantress who sacrifices laning phase for insane team fighting, Seraphine definitely has a fair share of counters. They come mainly in two types: hook champions and long-range mages with CC and damage.

The notorious hook champions like Blitzcrank, Thresh and Nautilus all have that dreaded CC that Seraphine has a hard time dealing with. Unlike other engage supports, like Sett or Alistar for example, who have to simply run at Seraphine, the hook champs can stand at different angles to find the catch or in fog of war. As such, they are less susceptible to her Beat Drop (E). On top of that, they're pretty difficult to kill, and Seraphine doesn't have that much damage, so they can out-brawl her in the 2v2.

On the other hand, mage supports with long-range CC and/or poke can give her a hard time. Zyra and Xerath are two of the top picks in this category. Both of them have more range than Seraphine and much more damage. Morgana, Brand and Swain are also good picks that can bully her and offer some sort of scaling. Any of the picks in these categories should yield positive results overall. 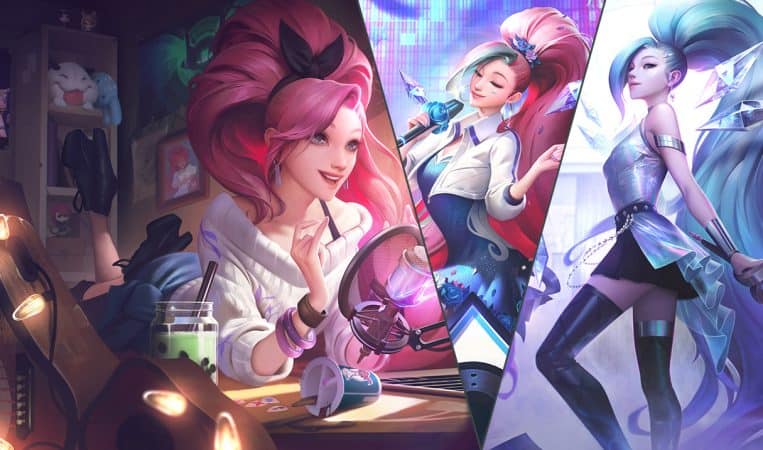 As a newer LoL champion, Seraphine doesn't have a huge wardrobe of skins to choose from yet. However, her debut skin is an ultimate skin, K/DA All-Out Seraphine, which means it's of the utmost quality. And, even better, it's technically not one skin, but three in one. When you buy K/DA All-Out Seraphine, you get the first skin of the three and must complete missions to unlock the others. Each skin unlock is a step in her journey from an aspiring artist to K/DA sensation.