The biggest game so far for Rogue, can they build off the momentum from Day One and take down DWG to give us our biggest upset of Worlds thus far? 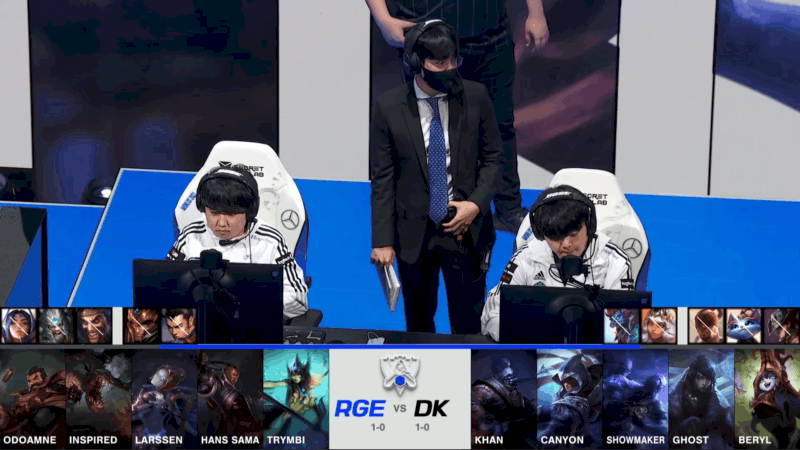 Against the reigning world champs, it was not the start RGE needed as DK were able to pick up an important First Blood. It came from a solo kill in the top lane for Khan, as he dominated Odoamne in the 1v1. It’s pure domination across the map from DK. With just 13-minutes on the clock, they moved 5k ahead with nearly two of RGE’s outer towers down with full plate gold going over to DK.

DK, by the 17-minute mark, were raining down death onto the RGE bot lane, pushing into the Inhibitor turret. The one good bit of news for RGE was that Hans Sama was able to pick up a 1v1 kill against Ghost. It’s shortly followed by another kill onto Ghost for RGE, and while they’re still 8k behind, they were at least trying to stay in the game. After that, there was another kill without reply for RGE, while the lead dropped to just 6k. Sadly, it felt like DK were just stalling for Baron while RGE desperately tried to stay in the game.

Searching for the miracle, RGE forced a play onto DK. They managed to get a massive early kill before Hans Sama was taken down, but still, RGE won the team fight and managed to take down four members of DK before moving to Baron. With the Soul Drake spawning, DK needed to secure it. And DK did claim the Ocean Soul, with RGE giving it up for their Baron as the gold lead fell to just 3k.

RGE forced a play mid lane, while they got an Inhibitor, they lost an Inhibitor in the bottom lane as a trade. With Elder Drake spawning, DK started it but stayed hidden. RGE fell for the bait in the bush and lost Inspired right off the bat. As a result, DK secured the Elder, and despite Hans Sama's best efforts, RGE just couldn’t do enough damage to win it the ensuing team fight. With a commanding team fight win, DK were able to push towards the base and secure the win. While it’s a loss, the near-comeback will give RGE members some confidence as they head into the next few days of Worlds.