A crucial day for Fnatic, a loss here could see them all but sent home after just three games. If they can win, however, they keep themselves alive in the group heading into the final day. 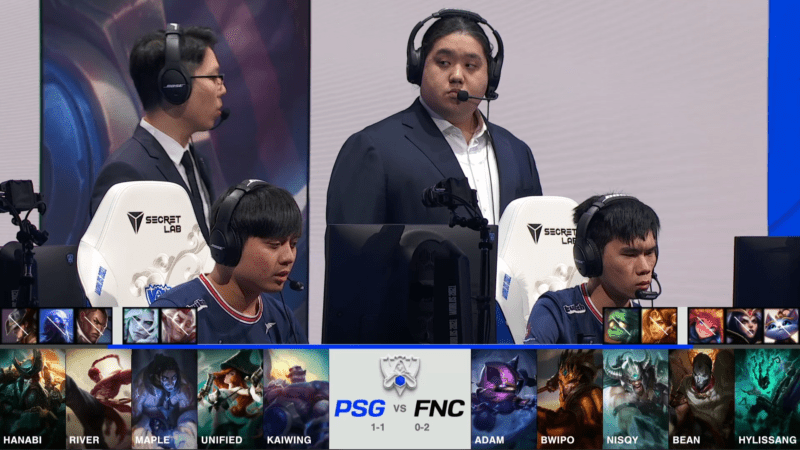 The opening minutes were quiet in-game, but soon disaster struck for FNC. After claiming the Rift Herald at the 8:30 point, they completely threw away the advantage by opting into a foolish fight, where they lost three members to PSG. The next fight was a one-for-one, and though FNC got onto the scoreboard with a kill, PSG claimed the second drake. Eventually, FNC finally managed to get some kills without reply, picking up a total of three as PSG faltered.

The first 5v5 fight started in the mid lane. The initial engagement saw nobody fall, though both sides postured. FNC finally made the play happen as they picked up two kills and claimed a drake of their own. By the 20-minute mark, FNC had clawed back the deficit to be 1k ahead themselves, with the Baron now in play. Seeing a potential opportunity, Bwipo forced another play in the mid lane, but this time FNC are the ones that are punished. Two members of FNC fell as PSG moved to the Baron. They disengaged as the remaining members of FNC contest to stall it out. However, shortly after there was another team fight victory for PSG. Again with Baron in play, FNC lost two members. But once more, PSG invested too much chasing FNC so the Baron was left alive.

Back and forth and back again

All of a sudden, FNC decided to rush the Baron while PSG was not aware. PSG were busy on the bot side of the map, so FNC easily secured the Baron. But with a Soul on the table, a massive fight erupted around the drake pit. FNC tried desperately to claim it but failed to do so. PSG took down three members and denied the drake, taking a FNC win condition off the table. Afterward, PSG moved to the Baron as they claimed the second Baron of the game at the 35-minute mark.  That wasn't the end of it though, as there was another Soul drake fight five minutes later. This time FNC did manage to get an early kill and finally claim the Ocean Soul.

The game stalled for a while but FNC found a big pick on the bot side of the map. Though it wasn't the best. Sending so many members allowed PSG to claim an uncontested Baron buff as the game moved into the 42-minute mark. With it, PSG claimed the mid lane Inhibitor as FNC lost Hylissang to an early engagement. PSG continued the push onto the FNC Nexus, however, FNC managed to knock down one member with one traded back. FNC managed to hold their base as the game continued.

The stalemate didn't last forever. Eventually, PSG found a fight in their own jungle, and in a frantic 5v5, PSG managed to come out on top. PSG lost one member but took down three from FNC. They used the opportunity to finish off FNC's base and Nexus as FNC slumps to an 0-3 start. For PSG, they moved to 2-1 and continue to control their own destiny.