After weeks of action, it all comes down to this. The MSI 2022 Grand Final.

After coming into the event as the two favorites, it's not a shock to see them face off in the Grand Final. While the moment is slightly ruined by the fact RNG isn't at the venue, it's the final many people wanted. Could RNG retain their MSI title, or would T1 finally get back to title-winning ways on the winning stage. We were just potentially five games away from finding out. 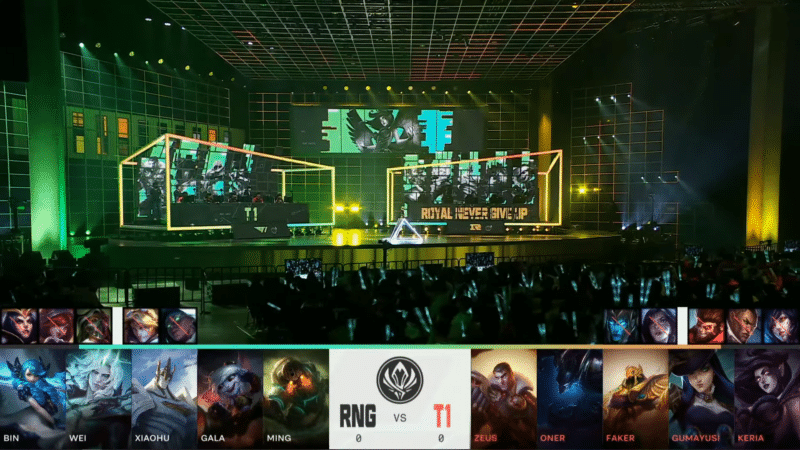 The first game in a massive MSI series. With home-town advantage, could T1 bring home the trophy. It certainly did not start that way, as RNG claimed a level 1 lead. In classic T1 fashion this MSI, despite being two kills down, they had a 1k gold lead. Mostly thanks to their drafting winning lanes, the key next would be taking that into the mid-game. The first team fight is in the top lane, with a 2-for-2 being traded over after RNG failed to spot a deep TP ward in their lane. By the 21-minute mark, T1 remained in a 2k lead, as they chocked out RNG across the map. The fight at the Drake looked perfect for T1, but with traps despawning RNG took the play. It was a 3-for-1 fight in RNG's favor, plus a Soul Point Drake. At the next Drake, RNG were quicker pulling the trigger as they secured the Ocean Soul.

T1 risked it all by forcing a play on the Baron with RNG stuck in the base. RNG did manage to make it in time, as Wei pulled off the Baron steal. Dominance across the Rift for RNG, as they continued to be a force. Despite T1 leading at the start, RNG always looked the more likely to come out on top. 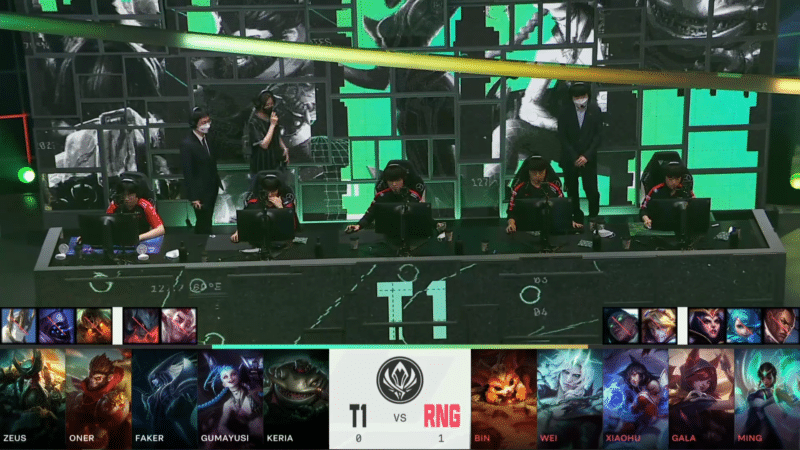 It was the Game 1 T1 needed to avoid. With that loss, they needed to bounce back in Game 2. Another game, another first blood for RNG. It's quickly turned around for T1, however, though RNG had the lead at 5-minutes. A more bloody Game 2 saw the game tied up at the 12-minute mark as both sides trade blow-for-blow. The game calmed down as we moved into the mid-game, with Baron soon to spawn, T1 had a 5k lead. While T1 had a lead, RNG were able to win a team fight as Baron spawned on the map. With two members down, T1 made an attempt to steal away Baron and Faker does just that. He secured a huge stun and the damage from Faker and Gumayusi is able to kill four members of RNG. That play was enough for T1 to snowball into a victory as we have a series on our hands. RNG came close, but some stellar plays from T1 saw T1 secure the victory. 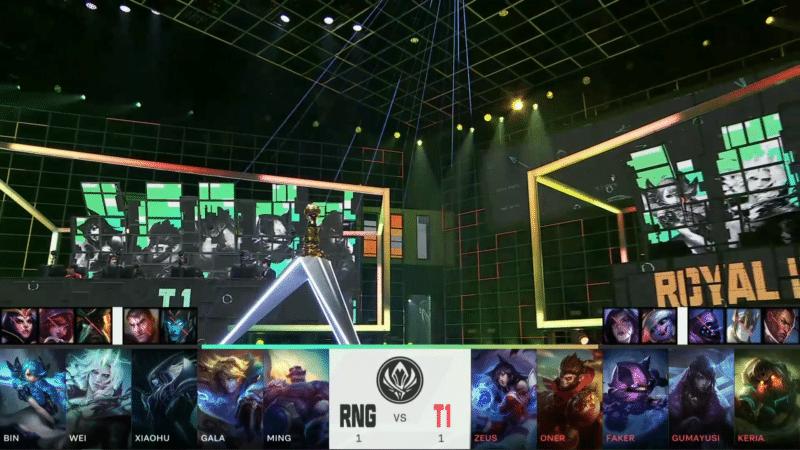 Faker and Zeus swapped champions after a pause

After a great Game 2 from T1, we have a series on our hands. A big first blood for RNG in Game 3, as they looked to quickly put the Game 2 loss behind them. T1 managed to get on the board moments later but RNG remained in the lead. A huge play at the Rift Herald was next, and it was RNG once again who picked up the win. With the team fight win, Rift Herald is secured and GALA is left alone on the bot side. A double tower secured on the bot side, as RNG moved to 4k ahead at 13-minutes as they look to dominate. With two Drakes, and a 7 kill lead, RNG were still in the dominant position with Baron just a minute away from spawning. The third Drake was the play T1 looked for but RNG were once again ready for it. RNG had too much damage, despite T1 having a near-perfect setup. They aced T1 as RNG looked to secure the Game 3.

Baron is next for RNG, though T1 did secure a kill and a bounty during the Baron Power Play. As Baron faded, RNG broke into the T1 base as they looked to end. T1 forced the engaged but had nowhere near enough damage to shut them down. RNG secured the win as they moved onto series-point. 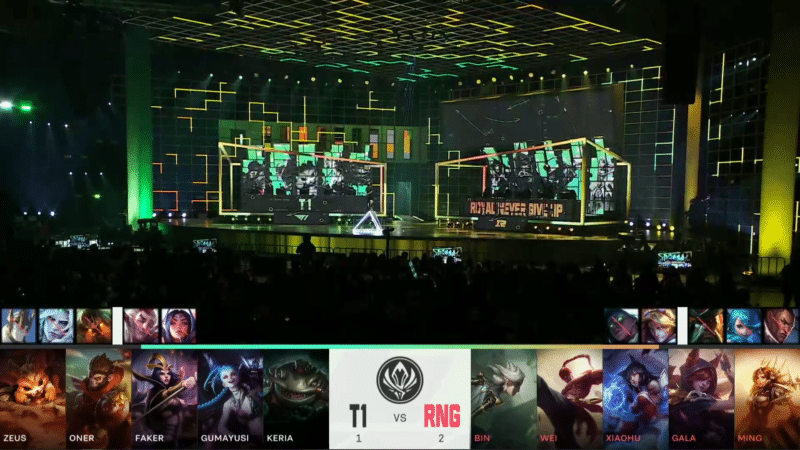 The biggest game of the series for both sides. T1 desperately needs a good start to the game, while RNG just needed to stay calm to secure the MSI title. It was the ideal start for RNG as they secured first blood. It may have been the least dramatic 20 minutes in LoL history, yet someone it was the most compelling watch. In typical T1 fashion, they've secured no kills but have a 4k lead. With Soul Point on the map, T1 took their chance to claim it while RNG chased Zeus. With RNG caught out of position, T1 aced  RNG as they moved towards the Baron. With the Baron secured, T1 pushed into the RNG mid-lane as they looked to secure the victory. RNG fought valiantly but couldn't stop the T1 push. The win meant the series would go all the way to the fifth game. 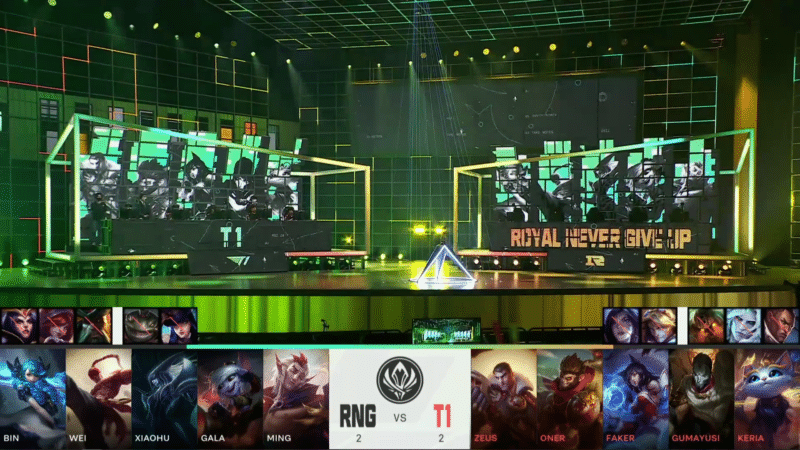 The Grand Final of MSI is upon us, and it would go the full way.  First blood was secured on the side T1, but RNG quickly flipped it as they secured a lead. By the 10-minute mark, RNG had a 1.5k lead as RNG forged ahead. As Baron spawned, the RNG lead wasn't falling as T1 struggled to find a way back. That didn't change when Baron spawned, with RNG able to secure without any trouble. With Baron, RNG pushed through the T1 mid-lane and it looked all but over for T1. They're unable to hold don't their base and that was in. After a slow early game, RNG kept up the momentum as they closed out the game. It's a back-to-back MSI title for RNG as T1's wait for another International title was put on hold.