MSI 2021 Rumble Stage begins today and it is full of heavyweights!

Mid-Season Invitational 2021 is back after a break and the top two teams from each of the groups are back on stage after making it through qualifiers. The Rumble Stages are anticipated to be exciting and exhilarating for the fans as they watch the best teams in the world take part in the tournament.

Starting off the day was World Champions DAMWON KIA up against Royal Never Give Up, the undefeated Chinese LPL team Here is our recap for the first day of the Rumble Stage.

DAMWON KIA vs Royal Never Give Up 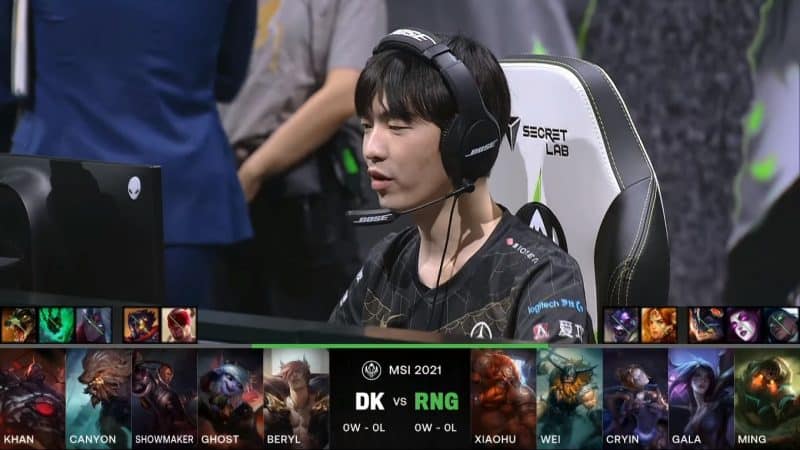 The undefeated LPL Kings faced the likes of DAMWON KIA, the current World Champions, in the first match of the Rumble Stage.

After a range of small trades, RNG initiated the first major 2v2 fight in the bot lane, which ended up being an even trade of kills. However, DK made a good read of the enemy jungler’s position and got a quick kill in exchange for nothing. Canyon took the first dragon of the match and secured the Rift Herald. Another fight in the bottom lane saw RNG take the first kill but a quick Teleport from DK Khan to the lane ensured that DK got two kills to their name.

Then, RNG responded by picking off champions and nullifying the threat of team fights by separating the carries and the tanks to get easy kills at almost no risk. Next, the team looked to take the third dragon of the match. But Canyon got it for his team, though RNG secured two more kills to their name to mitigate the lead gained by DK.

RNG started to take control of the match by engaging in a huge mid lane skirmish, where both of the teams played the match-ups brilliantly. Here, RNG followed up with their Teleport to get some more kills and move to the fourth dragon of the match. While the dragon was started by RNG, Showmaker stole it just when the game was looking out of the hands of DAMWON. But RNG retaliated by securing the kill on Khan. Capitalizing on the opportunity of DK not having a tank on their ranks, RNG took down the Baron and rushed down the mid-lane to take a final fight near the DK base. After one fateful fight, RNG cracked the DK base wide open. They defeated the World Champions and maintain their unbeaten streak at MSI. 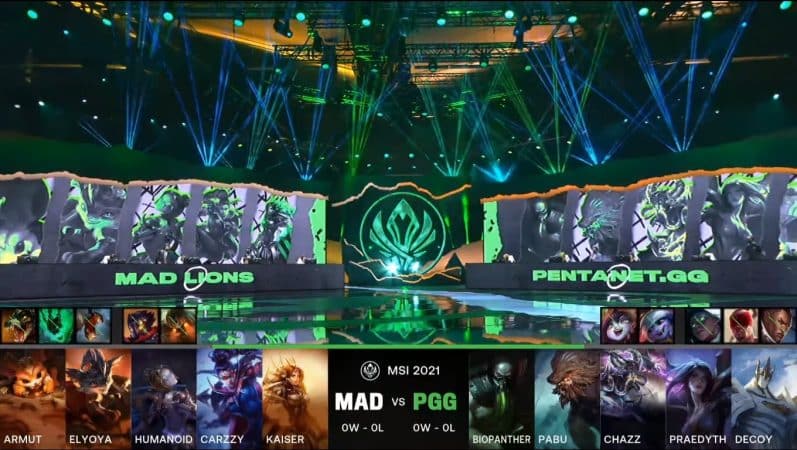 Pentanet.GG continued the tradition of picking up spicy off-meta picks by choosing to opt for the Kassadin which was further countered by a Vayne pick from Carzzy in the bottom lane. As scaling was on the line for both of the teams, MAD pressured the top lane and tried to pull down Biopanther’s Urgot. However, after the first failed attempt, they tried again and donated an easy kill to the Urgot. At the same time, the bot lane saw some action as Vayne got his first kill in the match over Kai Sa.

The top lane was again targeted by the jungler to nullify the lead gained by Urgot as they secured the kill for MAD Lions. Elyoya came back again to gank the lane, however, they went a little too deep in the lane and Decoy secured himself a kill. Pentanet.GG looked determined as they fully committed to objectives and even got some great kills in a 1v1 battle with the MAD Lions.

Recognizing the threat, MAD lions started to dissect the enemy team. They applied pressure on the side lanes, which stopped the enemy from grouping up. As a result, team fights took place on MAD’s terms and while PGG traded evenly most of the time. A pick onto Pabu’s Udyr in the jungle made an easy window for MAD lions to take the Baron down, push further to grab their first victory of the day and upset the underdogs of the tournament. 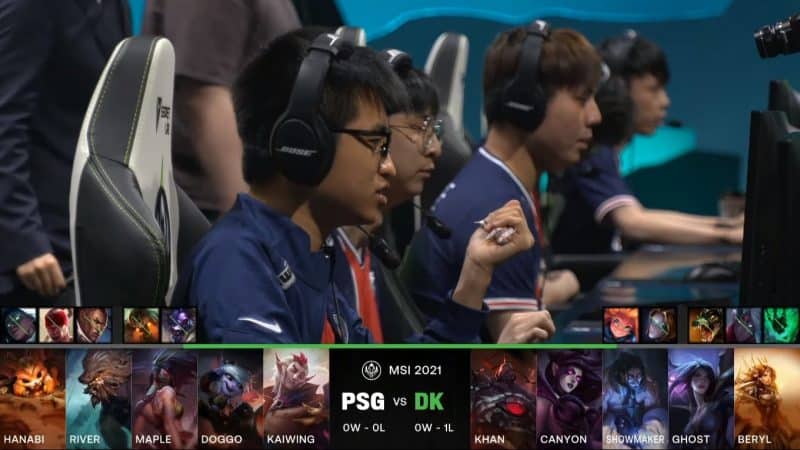 After losing the first match of the day, DK sought to change their fortune in front of PSG.Talon. The match started very slow, with both teams farming and taking small damage trades in the lanes. First Blood came for PSG near the Rift Herald, where they took down Canyon to gain a minor lead. PSG looked very oppressive in the early game as they picked a few more kills in the game. On the other hand, DK Canyon was securing dragons at every possible opportunity and helping DAMWON KIA maintain their composure in the match.

A fight for the third dragon drags PSG a bit down as they secure the dragon, but they lose quite a few members on their team, which equalizes the gold lead they had in the game. After that, DAMWON KIA picked multiple kills to extend their lead and set up for the next dragon fight. Forced to take a stance, PSG took a terrible 50-50 fight, which pushed them further into the match and Showmaker stole the dragon with an ability to push DK to the Soul point.

At this point, DK has garnered a substantial gold lead. As such, they pushed the lanes to take down the enemy’s turrets and make it easier for them to secure the Ocean Soul for them. A last desperate attempt by PSG to delay the Soul dragon cost a ton of lives. Meaning DAMWOM could freely push through the mid lane to take the first victory of the day for them.

Royal Never Give Up vs Cloud9 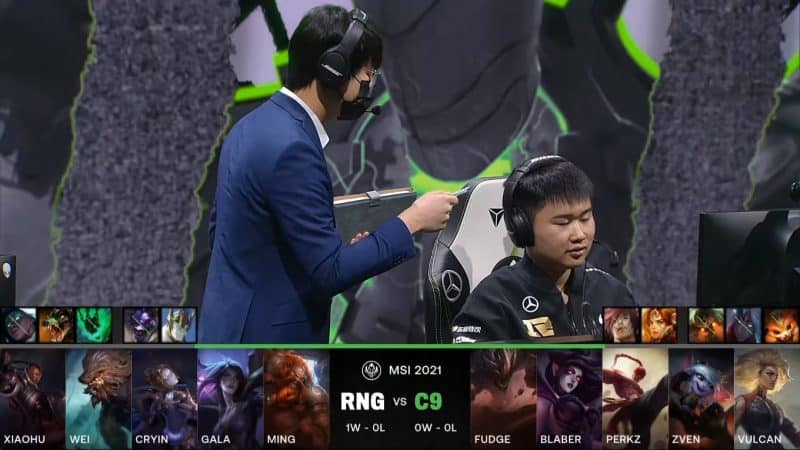 After winning the first match against the world champions, RNG looked to take down the NA giants to secure their way to the Knockout Stage. As expected, Cloud9’s top laner was targeted very early as RNG secured the First Blood on the enemy Malphite. The match-up was terrible for the C9 top laner as Lucian bullied him. Cloud9 made a great play in the mid lane to take down the Orianna and secure the first dragon of the match. Wei took the Rift Herald and used it on the top side to break the first turret of the match. This freed up the top lane Lucian to make frequent roams over the map.

Cloud9 made a teleport play in the bot lane to secure the enemy support. However, RNG traded it with a dragon and Xiaohu secured a solo kill on Blaber. Cloud9 attempted to take down the enemy mid-laner, but the Orianna delayed the death by dodging skill shots. Meanwhile, RNG got to the top lane and picked crucial Cloud9 players to gain a monumental lead over them. Just as they were about to claw their way into the match, C9 came back with a great answer and took down all members of the RNG squad after a great team fight.

RNG lost their lead and Cloud 9 looked in control as they started the Baron for themselves. However, the Chinese LPL team had other plans. They backdoored the C9 base and finished the match as C9 got their hands on the Baron. RNG is still undefeated at MSI 2021. 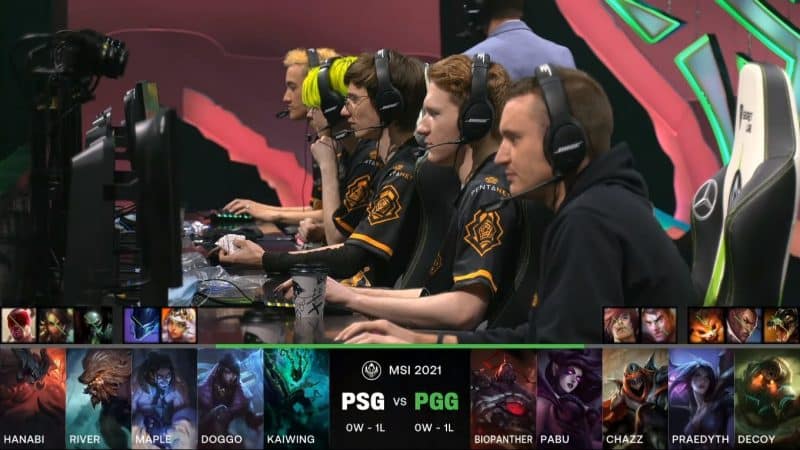 The Pentanet.GG spicy picks tradition continued as Chazz picked up the Zed in the match against PSG.Talon. PSG picked up the first blood in the mid lane, where they got two kills to start things off. Next, a dive onto the bot tower made by PSG made sure there was no way out for the enemy ADC and support, which was executed flawlessly. Suddenly, Praedyth was caught in the jungle, which took 5-0 for PSG as they dominated the match.

It didn’t stop there as they acquired a considerable gold lead. A top river-side team fight broke down; however, PGG was still unable to secure kills for the team and went down further into debt. PSG looked in complete control of the match and it was only till the 17th minute when Chazz’s Zed secured the first kill for PGG. PSG took every team fight and won it for them to make ending the game just a mere formality.

Pentanet.GG made a few desperate attempts at the end, but PSG secured the Baron and closed the match to get their first victory of the Rumble Stages in MSI 2021. 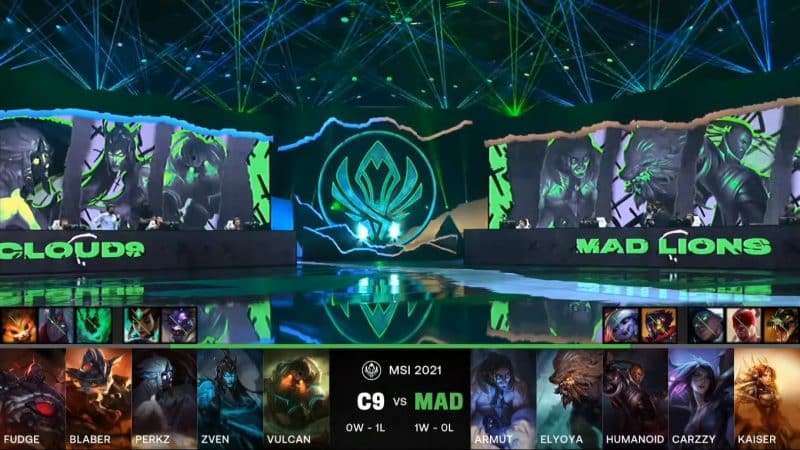 The famous EU vs NA Rivalry to end the first day of MSI Rumble Stages! Perkz pulled up the off-meta Kindred mid pick to bring a bit of uncertainty into the match. The first team fight broke down the top-side river as Cloud9 looked to secure the crab but looking at the Kindred mark on it, MAD Lions were quick to collapse and put a beautiful kiting damage transfer to drop none of their teammates and take down three members of the enemy team. Next, MAD Elyoya made a very good gank in the bottom, which secured the successive three kills while C9 Perkz outplayed Humanoid and got one for himself.

MAD Lions looked decisive and very confident in their team fights as they looked for picks and barely gave any windows to Cloud9 to come back into the match. MAD Elyoya was having the match of his life, as he went on a killing spree and only dying once in the match. At 21 minutes, MAD Lions secured the Baron for themselves and punished C9 when they looked to contest it.

Cloud9 got a few kills back, but MAD Lions’ 10k gold lead ensured that they secured the ocean soul for themselves and slowly marched onto the enemy base. They ended the match in style as Cloud9 ended the first day of the Rumble stages without a win.