After the explosive start of MSI 2021 on day one, unconventional picks like Rumble, Morgana, and Lee Sin are heating up the stage. Things were about to get heated moving into the second day of MSI Group stages.RNG would be leading the day with back-to-back matches with Pentanet.GG and Unicorns of Love.

Next, we will have matches from DK, Cloud 9 and MAD Lions to push their leads in the tournament, where the underdogs would be looking to achieve an upset in the tournament. Read our recap of MSI 2021 Day Two below.

Pentanet.GG Vs Royal Never Give Up 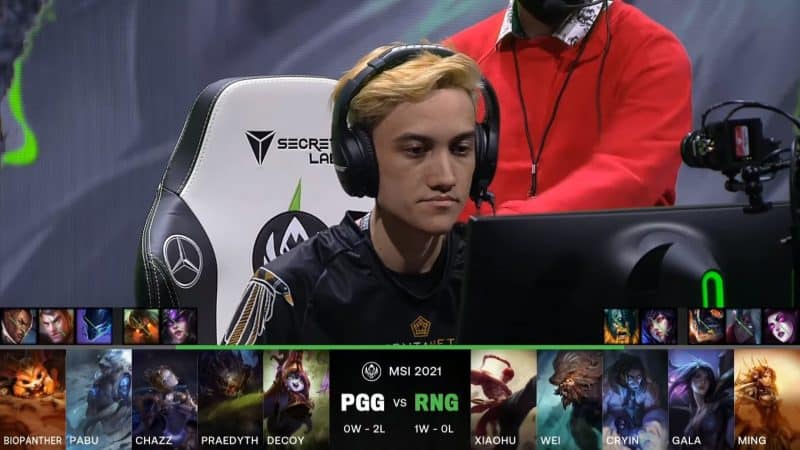 In the drafting phase, the Lee Sin top-lane pick came from RNG to spice up the game. The first fight broke down in the top-side river and RNG secured three kills as PGG only got one in return, being down in the levels. RNG Cryin chased Chazz in the mid lane and dominated the lane securing other kills on him throughout the match. While PGG got another kill on the Lee Sin, RNG didn't slow down and punished PGG for minor objectives. Gala on his comfort pick- Kai'Sa dived the enemy AD carry multiple times and pushed his lead forward.

In the jungle match-up, PGG Pabu struggled as the waves were constantly being pushed under the towers. However, just like the last match between the two on Day One, Wei pulled up a phenomenal performance by helping teammates set up dives and secure the team's Infernal Soul at 22 minutes.

At 20 minutes, RNG acquired a gold lead of 10k over PGG to dim their hopes of coming back into the match. PGG was desperately trying to farm and scale into the late game; however, the aggression from RNG was unmatchable and they were losing all the team fights near the objectives. Baron was secured by RNG uncontested, which further showcases the dominance that they had in the match.

Finally, PGG's Nexus was broken and they lost another time to RNG in MSI 2021.

Unicorns of Love vs Royal Never Give Up 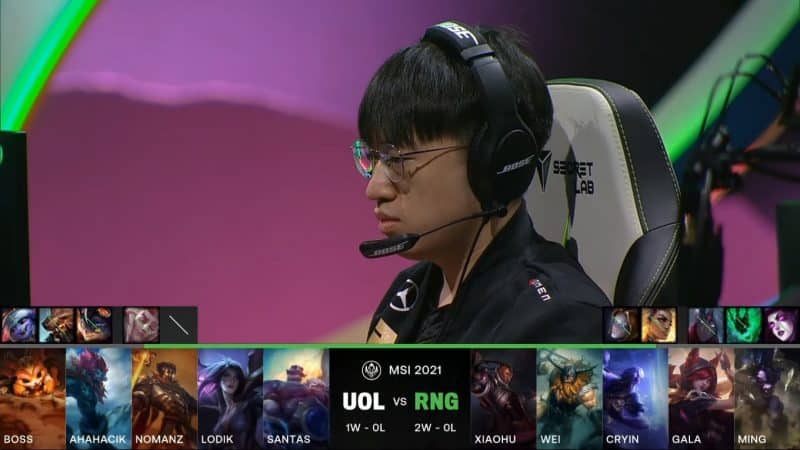 Royal Never Give Up (RNG) looked to bring the momentum from the previous match as they took on Unicorns of Love in their second match of the day. RNG Wei on his Olaf successfully ganked the top-lane Gnar and helped Lucian set up his lane for the match. UOL instantly traded out the kill to take down the enemy's support. However, RNG didn’t stop there as they secured the first dragon of the match and aggressively looked for more kills onto the enemy players to slow them down.

RNG picked up a few kills from UOL even before the fight for the major objectives started and they easily took down the objectives pushing the opponents away from the match. Unicorns of Love, desperate to make their way into the match, tried to flank the enemies; however, the enemy players quickly sensed it and ended up losing another fight.

After this fight, RNG ran down UOL and gave them no opportunity to come back into the match, securing Rift Heralds, Baron and dragons leading up to Dragon Soul at the 23rd minute when they pushed to break the enemy Nexus and establish their dominance in the group stages. RNG ended the day with 3-0 to their name and thrashed Unicorns of Love in the match. 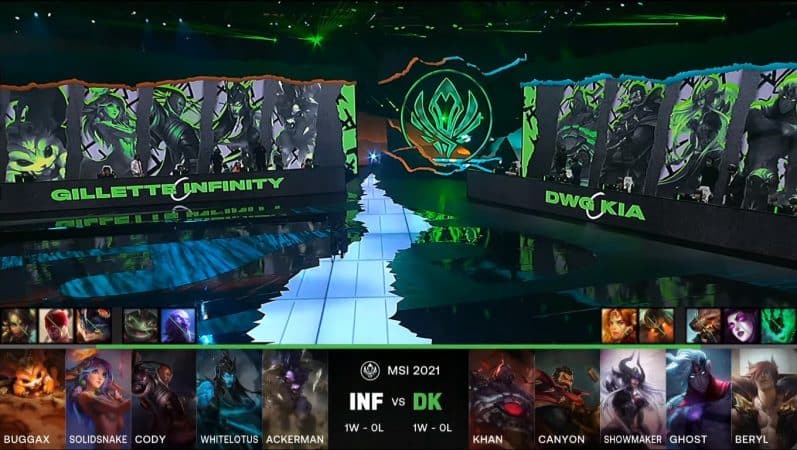 The current World Champions, DAMWON KIA, are back on Day Two to take on Infinity Esports. DAMWON got many comfort picks for the players during the draft, such as Graves and Syndra, while Khan jumped onto Sion duty. Surprisingly, INF were the ones to kick things off, as the bot lane for Infinity caught DK Beryl and killed him. However, Ghost quickly turned the play around and absolutely shredded the enemy champions in his way. Infinity tried to make the same play once more, but this next time, Infinity secured only one kill at the cost of giving Ghost a double kill in the bottom lane.

Moving into the match, Showmaker was styling on Cody and solo killed him in the lane phase. DK Canyon was leading in CS throughout the match and he was securing all the objectives on the map to push the matches into DK’s favor. However, DAMWON slipped up a little when they were too deep to secure a kill onto the enemy mid-laner and INF punished them for it.

Damwon was pulling the strings of the match at this point and they were brute-forcing objectives. They punished every small mistake from the side of Infinity Esports and slowly took away the match from Infinity Esports to snag themselves a relatively easy win. 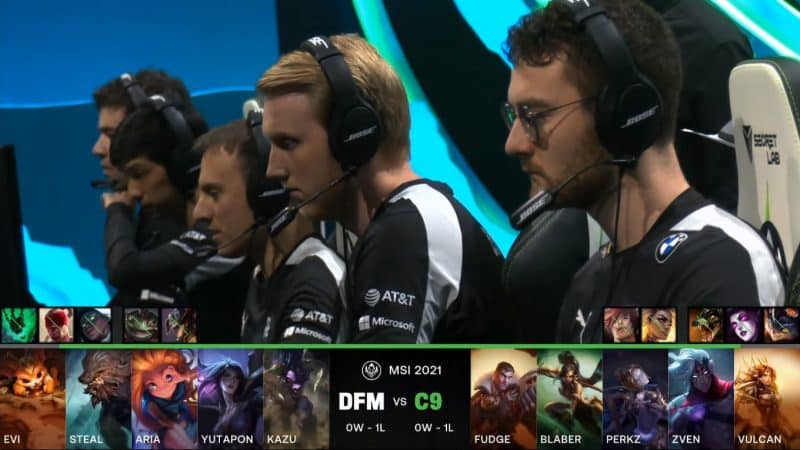 Cloud 9 was the favorite going into this matchup against DFM, but things took a sideways turn when C9 Blaber gave away his Flash and first blood to Steal’s Udyr over a Rift Scuttler. Although, Zven did secure one kill in the bottom lane to even things out. In addition, Cloud 9 secured the first two dragons. However, DFM made a very good dive on Fudge in the top lane to get one more kill to their name. After the second dragon, DFM secured another kill and slowly started to gain a small lead over Cloud 9.

DFM secured their first dragon of the match while C9 Fudge secured one kill over the enemy top laner. While setting up the Baron, Perkz was caught and he was blasted into smithereens. But DFM went way too deep to chase the other members of Cloud 9 and they were punished. As the match was moving very slow, both the teams wanted to fight around objectives.

The next dragon fight was started by DFM, who looked very good coming into the fight, but in retaliation, Cloud 9 made a great comeback into the fight, taking down several members of the DFM to secure their third dragon of the match.

DFM Took Down The NA Giants

Next, DFM looked for an engagement in the mid lane and they secured two important kills to go onto the Baron for the match. Meanwhile, Cloud 9 was rushing their fourth dragon to get the Soul, but it was punished heavily by DFM and they stopped the dragon from going and, in the process, took down several C9 members. After that, they marched onto the mid lane and broke Cloud 9’s Nexus to hand them their second defeat of the MSI 2021. 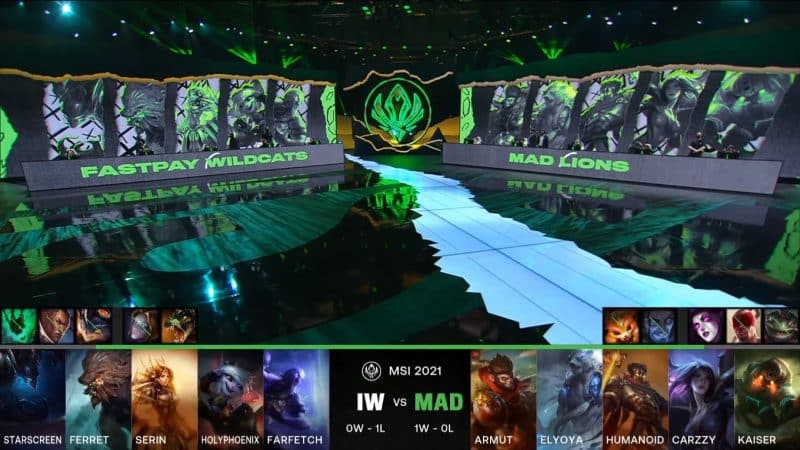 After dominating the strongest opponents of the group, the LEC champions were looking to extend their winning way in MSI. It was a very good start for MAD Lions in this match, as they secured the first blood in the bottom lane, but the enemies quickly traded it out. MAD Lions’ jungler Elyoya actively looked for objectives around the map and put pressure on the enemies.

MAD Lions looked unstoppable as they secured kill after kill, but IW Starscreen made some insane engages to the enemy bot lane, which caused MAD Lions to lose a lot of their lead. They equalized the kills on the scoreboard and both the teams punished each other for pushing too hard in their lanes. Moreover, IW got hold of some dragons to their name and threatened to take the match away from MAD Lions. They also nullified the impact of the first two Barons captured by MAD Lions to match them in the game.

MAD Lions understood the threat of Tristana melting their team and carefully calculated every fight, playing specifically around the enemy carry. At the last moment, after completing the third Baron of the match, MAD Lions took a favorable fight. They killed all the enemy players, leaving the Tristana to her lonesome, and winning a close match against Fastpay Wildcats. 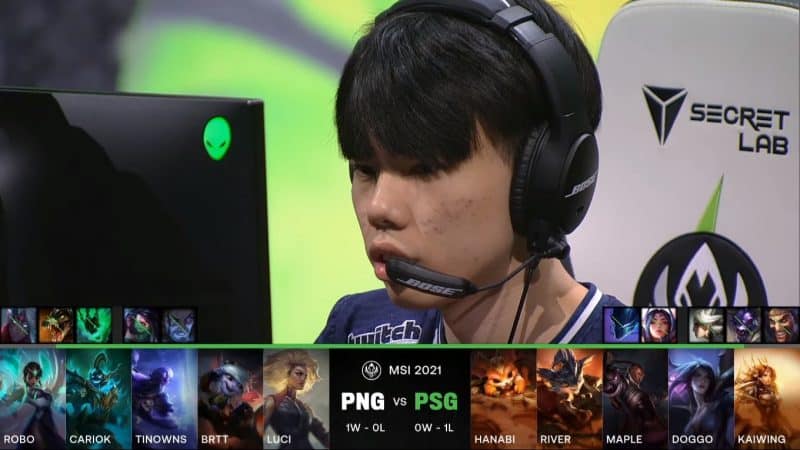 Pain Gaming started the match strong by setting up a good dive to catch the enemy top laner under his turret. However, PSG.Talon bounced back into the match by punishing PNG for their aggressive nature in the match. River's Rumble in the jungle created great scenarios for the team to secure easy kills and take the first two dragons.

Realizing that the match was slipping, Brtt and Luci dove Maple under the bot tower, but Maple's Lucian totally outplayed them. After this, PSG secured map pressure and their third dragon of the match. At the 20th minute, PSG had an 8k gold lead over the enemy team and were threatening all the PNG members, solo-killing carries in the team fights.

PSG Hanabi got a very good Gnar ultimate onto PNG just before the fight for the dragon soul and secured the soul for PSG. Talon. Afterward, they rushed towards the Baron to extend their lead. PSG got some more kills after finishing the Baron, which meant that the game was over and PSG. Talon secured their first win of MSI 2021.