A crucial game for NA and EU, with the added pressure of MAD Lions being eliminated upon defeat. For Liquid, victory would put them right into the mix for progression out of the group. If MAD did win, however, the unexpected four-way tiebreaker was still on. 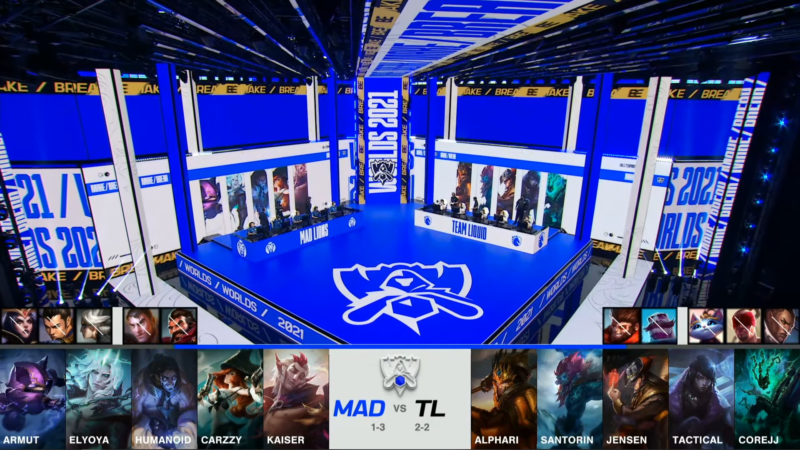 First Blood over to MAD, the start they needed, and they got it early. Shortly after, MAD found another two huge kills, one in the bot lane and another in the mid. With that going on, however, TL crucially picked up a kill top side to got on the board. Two more kills were picked up by in quick succession for TL as they recovered from the early game gold deficit to bring things even moving into the mid game.

The mid game began as the early game ended, with kills traded across the map. MAD lost out in kills but managed to pick up more turret plates. With Baron on the map, it’s the same story as before. The gold lead is nearly even as the tension of the match is clearly on display. MAD made a push down the mid lane, picking up two kills and the final outer tower as they moved to Baron. MAD engaged the Baron but TL were able to stop it and claimed a kill. Not too long after that, MAD made another attempt for Baron but this time it was a bait. MAD pivoted off the Baron to beat TL in a fight, claiming two members of TL before securing a safe Baron.

With Baron, MAD headed to the top lane but only managed to get a kill with TL keeping their Inhibitors up. TL forced a play into the mid lane, and while the initial engagement was perfect, the lack of follow-up damage was punished. MAD were able to walk away with all five members, with TL losing two. Seeing this opening, MAD were able to claim another Baron. Desperately trying to claw the game back, TL once again forced a fight and again MAD came out on top. With a team fight win, MAD pushed into the base and secured the victory as they kept themselves alive at Worlds 2021.