After the Lower Bracket upset which saw Rogue take down G2 Esports, the LEC would finally get a new title winner.

After their dramatic win against G2 Esports on Saturday, Rogue set up for a battle against MAD Lions. The first time we’ve never seen Fnatic or G2 in a final, and the first new winner since Alliance in 2014. It was a LEC Grand Final to remember as Rogue and MAD Lions locked horns. To start off the action in Game Four, Rogue made good on an early start. They used Odoamne's GP ultimate towards bot lane so Rogue could take an important first blood. MAD Lions found a way back in shortly after, when they caught Hans Sama behind enemy lines. It wasn't too bad for Rogue, however, as Inspired was able to come in and claim a kill back for his side. But next, MAD Lions made a huge play top side to swing the gold lead in their favor at the 15-minute mark.

Finding confidence, MAD Lions postured around the drake and they looked to take a fight. But it's Rogue who won the fight, with Inspired charging in to remove Carzzy from the action. Because Rogue won the fight, the gold lead was completely evened up. Shortly after, MAD again got caught out trying to find a fight and it’s Rogue that came out on top as they moved back into the lead. Rogue continued to push and win fights as they sieged down the MAD base with Baron buff in tow.

Sensing blood in the water, Rogue looked to swiftly win the game. And they found their moment as Kaiser is yet again caught out inside his own jungle. MAD did manage to get Larssen but Rogue took down three members of MAD. Having a perfect opportunity, Rogue moved towards Elder and Baron as they looked to end the game. They do exactly that. One Nexus kill later and Rogue claims the first game of the series. 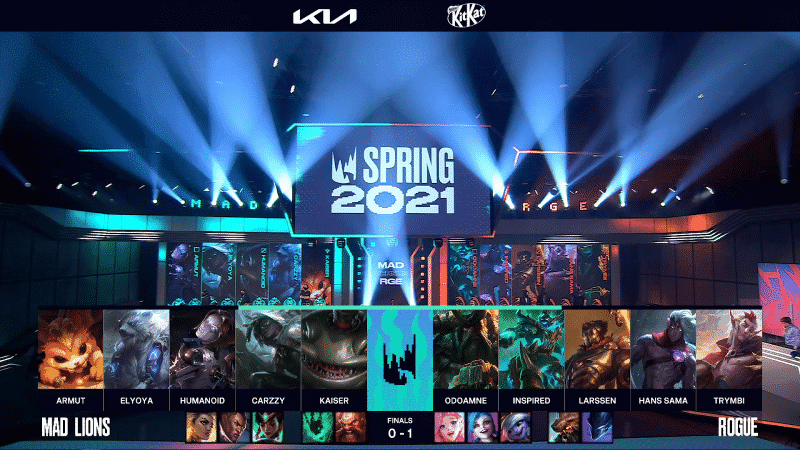 After a Game One disaster, Game Two got off to the worst possible start for MAD, as Inspired sniffed out an invade and snagged First Blood. Things got even worse for MAD Lions when they dropped a fight in the bot lane 2v2. With this, Rogue gained a massive early game advantage in Game Two.

Things started to calm down by the 15-minute mark. MAD did manage to get on the board, but Rogue still had a gold lead and looked to take down the mid lane tier one. But Rogue continued to slow the game down. Their methodic approach to LoL was effective, so they waited for the third drake to spawn at around the 21-minute mark. In the fight here, MAD did take a kill, but Rogue was able to equal them. So Rogue moved onto three drakes and Soul point.

In a desperate attempt to get back into the game, MAD found a massive pick onto Odoamne, who was stuck in the bot lane. They took the fight, won it, and moved to Baron as MAD finally showed up in game two. Both sides postured for the fight while the Baron and fifth drake spawn. Though MAD got one kill, they used everything for it, so both sides backed away. Finally, Rogue saw an opening and claimed the Baron buff, but MAD chased them down. Another fight ensued, but Rogue flipped it and took a kill to even out the gold. Even with that buff, Rogue soon got caught out and lost four members. This allowed MAD to pull ahead once more and they looked to take the series to 1-1.

Flipped in an instant

Then, a fateful 5v5 happened, and it went the way of MAD. They got the Gnar engagement they wanted and knocked down four members of Rogue. They moved to take the Baron with the base next in their sights. As the teams prepare to fight over the Drake, it’s Rogue this time that won the fight, taking down two members of MAD and crucially taking the Ocean Soul. Without hesitation, Rogue pushed down the mid lane and that was that. Rogue turned the game back in their favor in an instant as they took the series to 2-0. Down 0-2, all eyes were on MAD Lions to pick it up. To kick off the action in Game Three, it was MAD Lions who went for a 3v2 gank in the bot side. In it, Hans Sama used his Flash to make sure he got First Blood, but he did lose his life, which kept the play relatively even. MAD found pressure on the top side, as Eloya had success with two ganks in the lane. Despite that, Rogue still had a lead due to their lane pressure.

After taking a Rift Herald, MAD used it mid, and while it got the charge off, Rogue still managed to get a kill as MAD failed to capitalize on the play. MAD again tried to make a play in the mid lane, and while this one goes 1-for-1, Rogue still took the positives. Ramping up momentum, Rogue started the fourth drake, which MAD stole the drake in cost for one member. In the midst of this play, Rogue took the opportunity to take a free Baron and take full control. Rogue pushed the bot side to take advantage of their Baron, but MAD countered it. Armut had a perfect flank engage, which helped MAD beat down Rogue, and once again, the match was in a stalemate.

When Rogue looked for the third drake, they spotted Armut who was hiding behind them. Regardless, Rogue took the drake, but yet again it was MAD who won the all-important team fight as Baron spawned on the map they moved into the lead. With a little more effort, MAD refused to be taken down and won the game, denying Rogue the 3-0 and turning this into a real series. With a Game Three victory, the dream of a reverse sweep was alive for MAD Lions. Unlike the previous games, this time MAD did manage to get First Blood, though it was instantly traded back. In the early game, MAD continuously caused Rogue trouble. While they had a lead, it was a slender one at the 11-minute mark.

While not much happened for a while, but Rogue was the side that pulled the trigger on the next big fight. They got some early kills before MAD flipped it back and took the kills back. Afterward, MAD continued to keep up the pressure on Rogue, who seemed to have run out of answers for what MAD brought to the series.

Eventually, MAD marched down the mid lane, destroying the Rogue team and their base with them. After blasting the Nexus, MAD took the series to 2-2 and brought the series the full distance. Game Four was one that could have gone either way, but MAD always looked the hungrier of the two sides as they took down Rogue in it. Silver Scrapes. Game Five. With everything on the line, it was Rogue that came out on top in the early game with a top lane gank. They lost one for their trouble but they secured two massive kills. Rogue doubled down on the top lane pressure and claimed even more kills. As a result, they moved to 2k gold ahead before making yet another play in the bot side. All of this amounted to Rogue making huge strides to win this series.

Rogue continued to pile on the pressure as MAD just looked lost across the Rift. Rogue pushed the top side and penned MAD into their base, even at the earlier stages of the game. The first big team fight broke out in the mid lane and, not surprisingly, it’s Rogue that win it. Afterward, they moved for Baron, with the game-winning play so close they can taste it. Shortly after, another team fight happened. Rogue got two kills early in it, but Humanoid turned the fight around in a massive way and kept MAD alive in the series.

Then, of course, another fight. And it’s MAD that got the early kill, but Rogue came back in and kept the game alive. Despite their massive early lead, Rogue just couldn't seem to close out the series. A huge fight breaks out in the Rogue jungle, and despite the early lead, it’s MAD that does it. They win the fight, the final fight of the series. They kill four members of Rogue, the Nexus claim the series. MAD became the first team since 2014 that wasn’t Fnatic or G2 Esports to win an EU title.