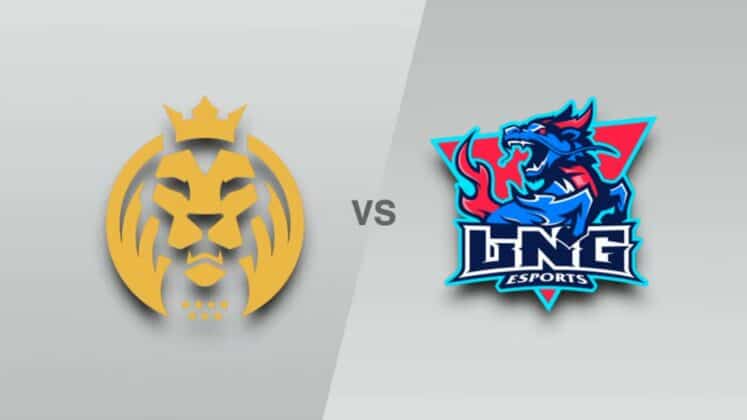 All or nothing for MAD and LNG, The loser will play their final game at Worlds 2021, while the winner moves on to face Gen.G in the final Group D tiebreaker.

First Blood went over to LNG, who then picked up a second kill instantly, getting off to a nice start. In response, MAD sent three members to the top side but it was the worst possible scenario for MAD, who had everything to do to get back in the game. It was another kill over to LNG as they secured a 1.5k gold lead at the seven-minute mark. MAD finally got a kill onto the map, diving the top lane 3v1, but disaster struck when two members of MAD died to the tower. Shortly after, ther was another dive from MAD in the mid lane this time. They did get the kill but again lost a kill back, though the Rift Herald was dropped top side, so MAD managed to keep the deficit to just 2k.

By the mid game, MAD had fallen to 4k gold behind, with LNG claiming two drakes. The only saving grace for MAD was the double Rift Herald. MAD made a desperate play in the top side, forcing two Teleports and the entire team into the play. MAD got the early kill but it was eventually traded over, though LNG gained the top tower for their trouble. LNG got a kill prior to Baron being engaged, but then the Baron is claimed by LNG. However, MAD went huge in the fight and managed to take down four members of LNG. The follow-up fight onto the drake saw MAD claim the buff with the team fight going one-for-one.

A desperate race for Quarterfinals

As we approached the 30-minute mark, MAD had managed to keep the gold disadvantage at just 2k as they remained in the game, despite a number of early losses. Another team fight with Baron back on the Rift, and it's a dream start for MAD, though it was traded back. MAD pressured the Baron, but without a jungler on the map, MAD had to retreat off the map as LNG were able to claim the Dragon Soul.

Soon after, Ale forced an all-in with three members of MAD exposed, but before his team could back him up, MAD were able to take him down. With Elder just 25 seconds away, MAD needed to make a move before LNG were at full health. A 5v5 on the Elder is up and it’s started off as a two-for-one kill trade for MAD, as the fight extended, it ended three-for-two as MAD took a minor lead on the Rift. With LNG members off the map, MAD engaged the Elder and claimed it. The kills traded one-for-one afterward as MAD secured a huge win condition for two minutes.

With Baron also up, MAD claimed it to secured the double uber buffs. MAD wasn’t able to get the fight with the Elder, but the LNG base was exposed. With two Inhibitors secured MAD were able to walk away. Going on the offensive, LNG pushed into the MAD base to try and win it. But MAD managed to hold and kill everyone from LNG. Having long death-timers, LNG couldn't help but watch as MAD pushed down their base.