Everything you need to know about Lee Sin, the Blind Monk.

Among all the champions in League of Legends, few are as famous as Lee Sin. With his extremely fun kit and even a special move, the insec, at his disposal, Lee Sin is one of the most popular champions in the game. As a result, there are plenty of reasons to learn about him and how to properly play him. And just as many to learn how to counter him! Whatever your reason, let's dive into everything about the Blind Monk! 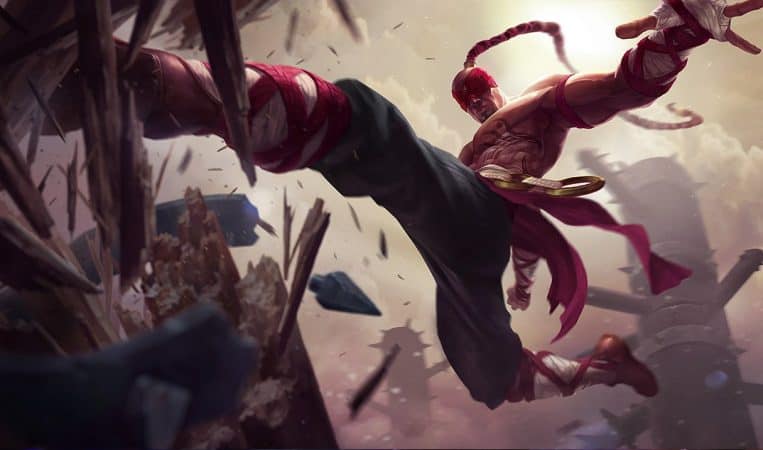 Lee Sin is from the mystical land of Ionia, where people live in harmony with nature and spirits of all sorts of natural beings. Among the most feared and revered spirits is that of the dragon, one which is foretold to bring ruin to some, and rebirth to others. From a very young age, Lee Sin was chosen to wield the power of the dragon, and arrived at Shojin monastery to be trained by the elder monks there on how to use it. They saw the power in him but also a fierce arrogance.

Nevertheless, the elders accepted him into their ranks. Though he was extremely talented, the elders tried to humble him by progressing him slower than his companions, which made Lee Sin spiteful. Wanting to prove himself as the best, he secretly found ancient texts which told him how to unlock the power of the dragon. In a training lesson, he debuted his newfound skill, but it was so strong that he crippled his instructor. After that, he was banished, so Lee began to wander.

On his travels, he found himself in the Frejlord and met Udyr, who like him, struggled to contain the power of the spirits within him. They stuck together, hoping to find the guidance they needed with the other's help.

Eventually, the two returned to Lee Sin's Ionian home to find it besieged by Noxus. The two rushed to the Shojin monastery to find it overrun by the Noxians, and while Udyr leaped into the fray, Lee Sin hesitated, seeing his comrades falling around him.

Seeing no other option, he summoned the power of the dragon once more. The power surged like an inferno, granting him immense power but claiming his eyesight. Regardless, he defeated the invaders in the monastery, and knowing his people safe, went to leave once more. He knew now that the power of the dragon could never be fully controlled. However, this time the elders stopped him and invited him back, acknowledging his newfound humbleness and strength of spirit.

Though he still cannot control it fully, Lee Sin continues to train to learn how to control his awesome powers and prepare himself for whatever foes may come his way. 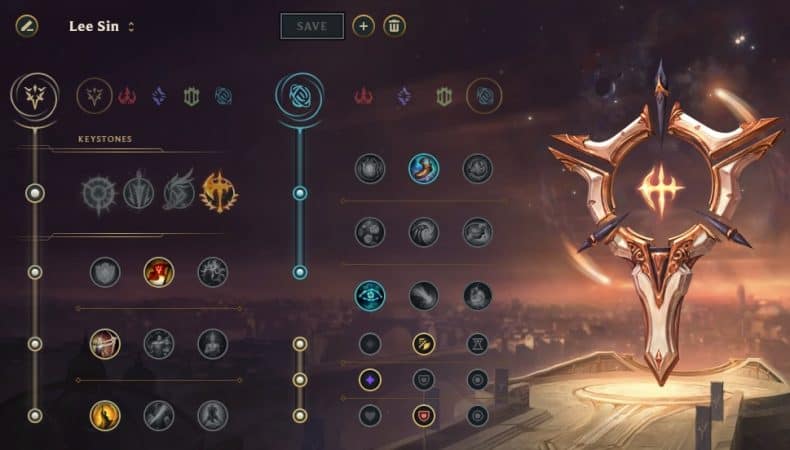 Though Lee Sin has a rather burst-oriented kit, Conqueror is the main keystone to take on him simply because it's so powerful. Besides being arguably the best keystone in the game, it's great for Lee Sin because he can quickly stack it up with his initial combo. Though he has enough damage to one-shot squishies, he needs to be able to brawl bruisers, which is exactly what Conqueror is for. The other runes in the Precision tree help him with his damage and a little bit of survivability just in case Lee Sin can't ward hop to safety right away.

The Inspiration rune choices are also important and for pretty unique reasons. Magical Footwear allows Lee Sin to get his boots for free, which is always great, but he can afford to forego boots in the early game because of his decent mobility. Cosmic Insight is crucial too, as they put wards and Flash on a lower cooldown. These are his two main engage/disengage options and are the difference between success and failure for Lee Sin. 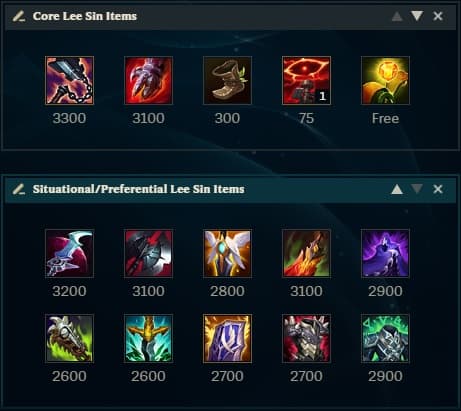 While Lee Sin has seen his time as an assassin, nowadays, his itemization revolves around bruiser items. As someone who wants to get into the middle of the action, Goredrinker and Sterak's are fantastic for him. They give him damage and needed survivability to make sure he can live after he kills off an enemy carry or engages a fight. Plus, the two items have great synergy in general. The boots of choice aren't ever really the same and should be decided upon by the enemy team composition. Though Goredrinker is the standard mythic, Eclipse is another viable choice for more burst-oriented builds.

After those three items, there are a lot of options. There are plenty of damage items to go and all have their own perks. Black Cleaver is good against armor-buyers, Guardian Angel gives a revive against high-burst teams, Death's Dance gives more sustain in elongated fights and Edge of Night gives lethality and a nice spell shield. Along with those are Chempunk Chainsword, which cuts down enemy healing, and Serpent's Fang, which helps you punch through enemy shields if there are a lot of them.

But if you're not the main carry or worried about too much damage, some tankier items are always options too. Randuin's Omen is strong against AD threats, specifically AD Carries, as it can reduce their movement speed, AD and critical strike chance. Thornmail is similar, but more focused on reducing healing. Lastly, Spirit Visage is generally good against mages and AP damage, as it gives you MR and increases the healing from Lee's kit and Conqueror. 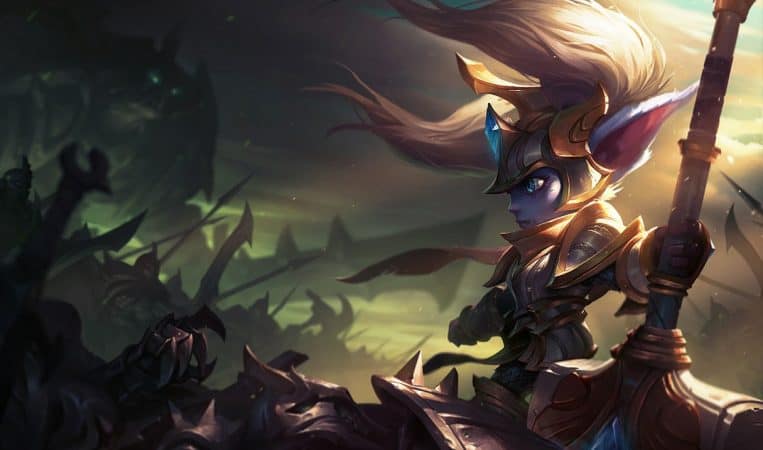 Lee Sin is one of the more mechanical champions in the game, so funnily enough, some of his biggest counters are champions with simple kits. Rammus and Udyr are two examples because Lee Sin can't really deal with their tankiness and CC. But Poppy has to be the most classic counter. She has tankiness and CC like the other two, but also her Steadfast Presence (W) that stops dashes and grounded those who try to use dashes in it. This can be deadly for Lee Sin. If he can't jump around with either his Resonating Strike (Q) or Safeguard (W), he's much easier to deal with. Other jungle counters include Nocturne, Warwick and Xin Zhao, as they can outduel Lee in the early game with superior damage.

Though it isn't popular as much anymore after nerfs, Lee Sin top lane is still somewhat viable. But because of significant laning nerfs, he's much easier to counter. Garen, Shen, Gnar and Jax have insanely good win rates into Lee Sin, but Tahm Kench, Darius, Riven, Sett and Malphite are no slouches either. There are quite a good deal of champions to deal with Lee Sin in the top lane, so most top lane mains should have something in their champion pool that's apt. 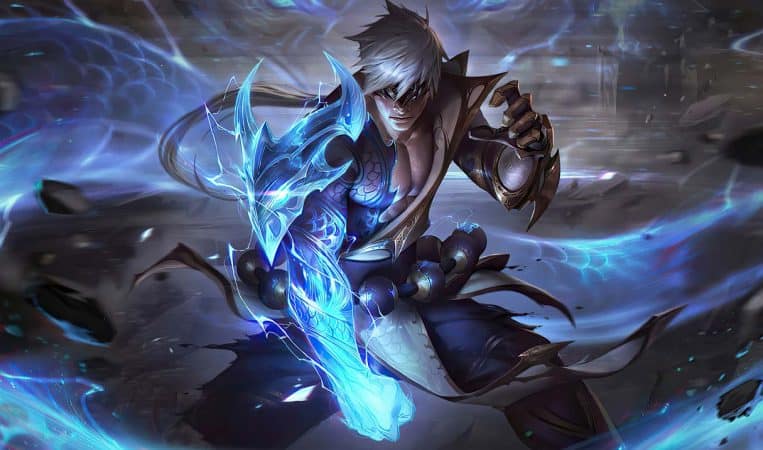 Lee Sin is arguably one of the most popular LoL champions of all time. As such, he's received an impressive amount of skins for players to collect over the years. The full list is below, with links to pictures of the splash arts embedded in the name. If you want to see them all together, with Chromas and in-game models, check out the League of Legends Fandom page.