TSM kicked off the LCS playoffs with a series against the Golden Guardians.

After nine weeks of intense competition, the LCS is finally in the playoffs stage. The format is new this year, as eight teams qualified for the post-season, as opposed to the usual six. The first matchup was a best-of-five between iconic NA team Team SoloMid ("TSM") and the rising stars, Golden Guardians ("GG"). 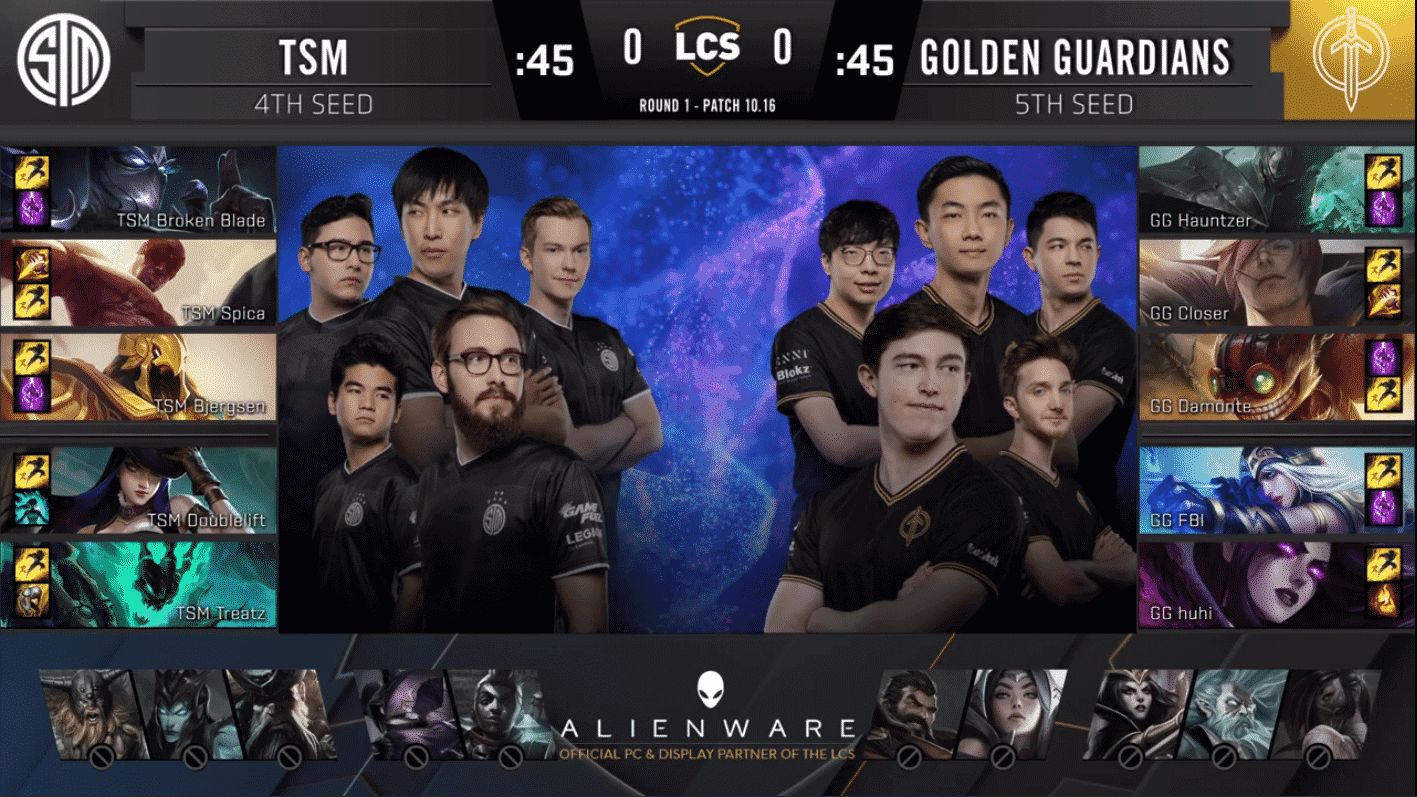 The first game of the day definitely delivered for fans. Broken Blade and Spica ran a clinic on the early game, starting off with getting First Blood on Hauntzer just before five minutes. However, GG had decent dragon control due to their pushing bot lane, so they took the first Infernal Dragon at minute six. TSM still maintained good control though, especially after 11 minutes. At this point, TSM stole a dragon away from GG, forced a team fight to get a kill and take multiple plates off the bottom tower.

The snowball kept going after that. TSM picked off the Flashless Damonte mid before trading a dragon to GG for the First Tower bonus top. At 22 minutes, GG grabbed their third dragon, but lost a team fight two-for-one. It looked like this was TSM's game. That was until TSM made an engage onto Damonte in the mid lane. Here, GG simply and purely out team-fought TSM from a deficit. They slaughtered TSM five-for-two and took Baron Nashor.

Then, GG made their push. Two mid lane towers quickly fell, as TSM made a questionable play in their red side jungle to pick off Hauntzer. Unfortunately for them, Hauntzer easily brought Treatz to the Death Realm, smashed him and his team collapsed to get two additional kills. Without the necessary wave clear, TSM was helpless to stop GG from sweeping through their base and smashing their Nexus. Game two was quite a different look from the first one with an insane ending. This time, GG had pretty solid control over the game from the start. They secured a Mountain Dragon at minute five before moving bottom a minute later to set up FBI to get First Blood onto Treatz. From here, the Guardians moved around the map to clean up objectives and some few kills.

It appeared that GG was in firm control. That was until TSM started to bully Hauntzer though. Every time he overextended to get CS, TSM collapsed on him and killed him three times in a row. This lost GG quite a bit of momentum. As a result, TSM wiggled their way back in and started to contest dragons, accumulating a couple of their own and even stealing away the Cloud that would've led to GG's Soul.

Then the 30-minute mark rolled around and the team fights erupted in full force. Each one was close, but after GG won one at dragon pit two-for-zero, they secured Baron. TSM made another bizarre late gameplay by going mid to kill Hauntzer. But they lost two towers, an Inhibitor and their ADC Doublelift. GG pushed forward, trying to end, but Bjergsen was an absolute hero this game and once again pushed GG back, helping TSM Ace GG at 36 minutes.

The air was tense as both teams watched the final dragon timer. TSM was set up near it, ready for a fight. It never came though, as three GG members Teleported into TSM's base, tanked the last remaining Nexus Tower, and finished off the Nexus before TSM even knew what happened. 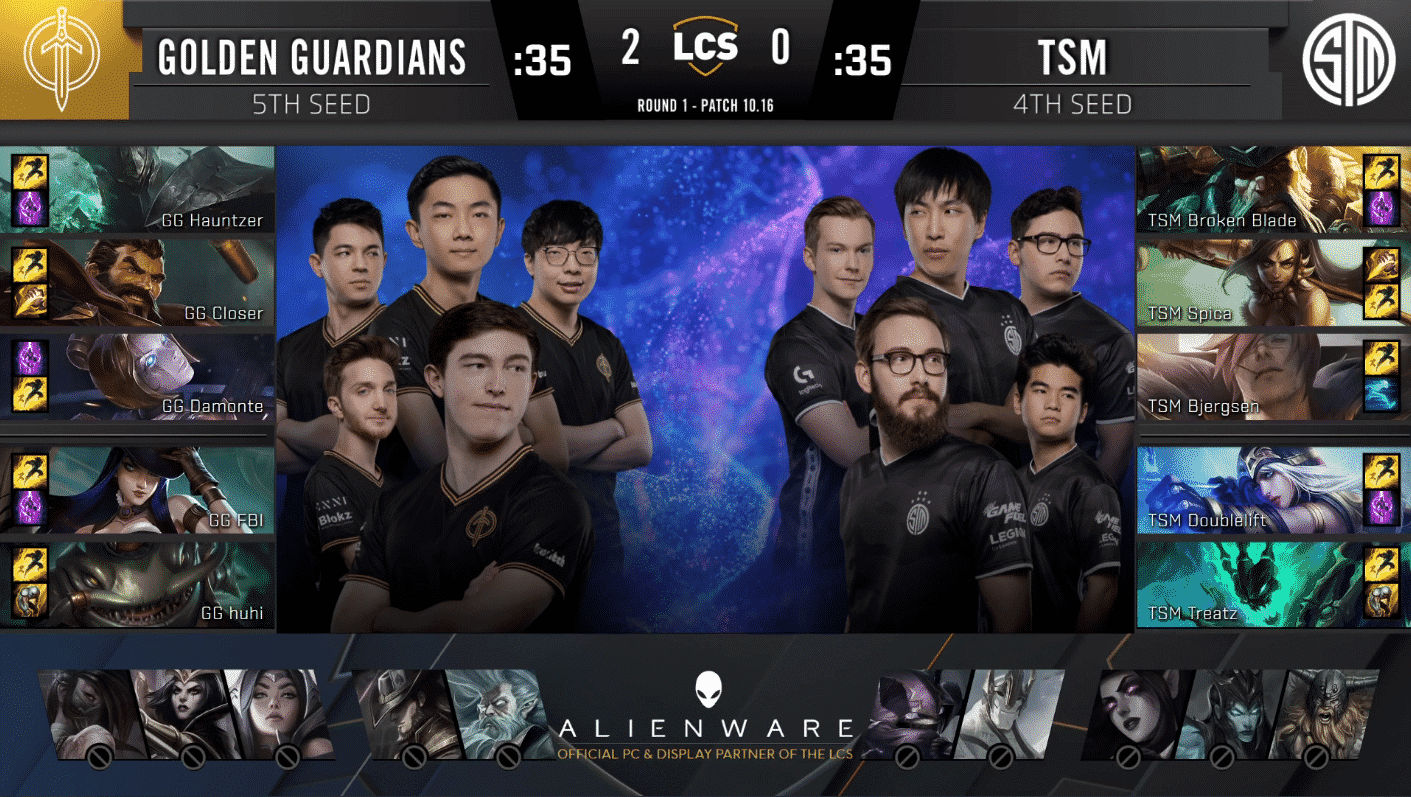 Everyone expected this to be a relatively easy series for TSM, but in game three, GG showed everyone that they're a serious competitor. Here, the put on a clinic versus the fallen dynasty organization. As with the other games, they had complete control over the early dragons, picking up two by 11 minutes. TSM tried to do a lane swap to rush first tower, but completely botched the play and instead donated the First Tower bonus over to the already-ahead FBI.

TSM looked completely lost. They couldn't manage to set up any plays or really retaliate against GG. Despite that, First Blood wasn't taken until 16 minutes. But when this bonus gold was acquired by GG, it was accompanied by two more kills off the back of a mid lane team fight. In addition, GG moved to Soul point too. Neither team made any noteworthy moves until 22 minutes, when Soul point was up for contest.

It was here that the teams met. TSM showed a spark of life, when they won a skirmish two-for-zero, but then it fell apart. In the 3v5, GG pushed forward, stole the dragon away to secure Cloud Soul, and went three-for-three in the ensuing fight.

It was almost comical what happened after that. GG picked off Bjergsen on the side lane and proceeded to push top. For the third time, TSM completely and utterly trolled, trying to kill Hauntzer in the middle of the map while letting GG run rampant in their base. Hilariously enough, Hauntzer ended up killing Doublelift while GG smashed the TSM Nexus. After that, it was just doomed. It was easy for GG to keep pushing, destroy the Nexus and complete the clean sweep on TSM.