Two teams looking to survive in the Playoffs.

Playoffs - Round 3 has begun and teams are fighting for their shot at the Semifinals. Cloud9 (C9) was one of the favorites coming into the postseason; but after the shaky series against FlyQuest (FLY) they’re looking to redeem themselves by beating Evil Geniuses (EG). On the other hand EG is looking to prove that they are a team worthy of attending worlds after a close loss against FLY and a 3-0 Victory over 100 Thieves (100T). This match was definitely expected to be a close one! Game One was an extremely exciting game with a lot of back and forth action that kept the game entertaining. The game started off with an awkward late ward on blue from Zven, forcing him to burn flash level 1. However, this did not seem to deter his laning phase. Zven and Vulcan were able to take over lane with a Senna Tahm Kench lane, but Zeyzal was able to keep his team in the lead with his Bard bringing EG into the lead.

C9 had a very nice mid-game teamfight around botside pixel bush. Licorice was able to completely take control of a fight as Vladimir allowing them to close the lead slightly. However, this only seemed to be a minor setback for EG as they continued to out teamfight C9 bringing the game back in their favor. Zven continued to pressure as Senna. But every teamfight was just barely lost with Zven constantly looking to clean up as EG got away with low health bars.

EG seemed to be in constant control of map pressure along with securing baron at 38 minutes. But C9 found the miracle fight at their bottom inhibitor at 40 minutes. A flank from Nisqy’s Twisted Fate allowing them to secure cloud soul at 41 minutes. Things slowed down after C9 secured the cloud soul; and both teams began to prepare for Baron Nashor and the Elder Dragon. However, neither team ever touched Baron because the teamfight starts around Baron with Goldenglue hitting a massive shockwave on Licorice deleting him out of the teamfight.

Fortunately for C9, their champion scaling finally kicked in and it seemed that Bang’s Kalista no longer provided anything in comparison to Zven’s Senna who took control of every teamfight in the late-game. C9 finished the game right after the teamfight with EG perplexed as to why they couldn’t close out the game. 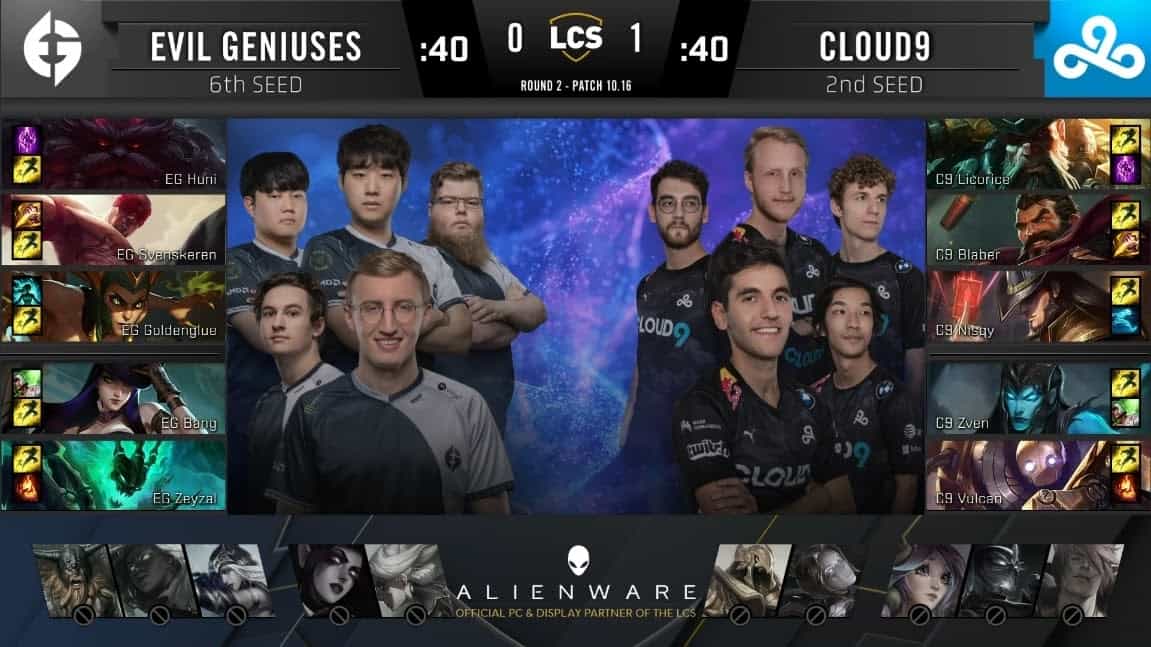 This second match of the series started a lot calmer than the first one with nothing crazy happening level one. However, with champions with a lot of pick and engage the game was bound to get crazy fast. With Blitzcrank and Twisted Fate, C9 picked up two kills on Svenskeren and Goldenglue botside, allowing them a gold lead and the first dragon. This lead continued to build up as C9 secured the rift herald into a 3-man kill on Goldenglue’s Cassiopeia in the mid lane at 10 minutes. The only hope EG seemed to have in the early game was Huni burning Licorice’s flash solo with a clean Ornn combo at 11 minutes.

EG continued to attempt to contest C9’s control of the game, but with little success ending up in a 5k gold deficit at 15 minutes with every lane losing across the board. However, C9 felt generous and greeded for a port on EG’s inner mid tower causing Nisqy and Blaber to die while Mountain Drake was alive. EG is able to secure the Mountain Drag the only thing that seems to be going their way this game. C9 rushed the baron at 20 minutes and EG contested in hopes of stopping C9’s snowballing, EG starts the fight off with a solid Or ultimate, but Kalista is still able to secure the baron. EG is able to kill most of C9, but just as things were about to turn in EG’s favor Licorice lands a massive barrel combo killing EG’s carries halting EG’s attempts of coming back into the game.

The game began to enter a lull, but EG was faltering under the pressure of the global pressure of Twisted Fate and Gangplank causing them to start the Baron at 28 minutes. The fight initially looked coles, but Goldenglue’s Cassiopeia could not land a big enough ultimate to overcome the deficit EG was in. C9 secure the baron and close out the game through the bottom inhibitor. 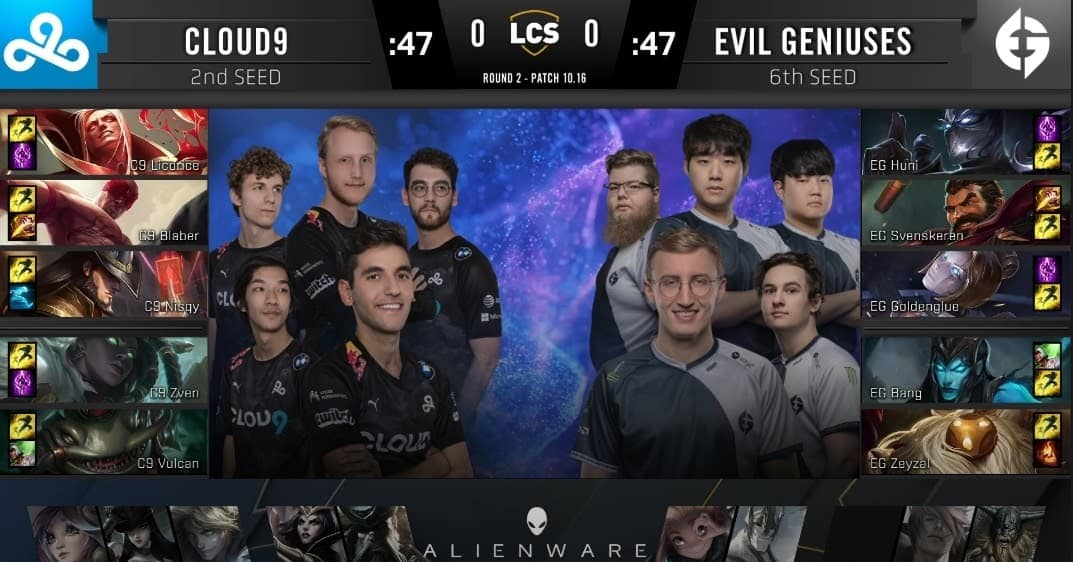 Game Three, C9 again allowed access to the Twisted Fate, however, Goldenglue is looking to put a stop to Twisted Fate with Lucian in the mid lane. Minor skirmishes occur across the map, but right around 5 minutes the map blew up with first blood on Huni with EG winning the 2v2 fight in the top lane. C9 bounces back at 6 minutes with a Twisted Fate ultimate on to Senna in the botlane, but in the skirmish following Huni roams down winning EG a skirmish in the botside river. EG continues the snowball the early with Huni and  Svenskeren taking over C9’s botside jungle in an intense bout of action leading to Svenskeren claiming a double kill.

C9 strikes back in the mid game with repeat kills on Huni utilizing Twisted Fate’s ultimate  causing the game to slow down as the gold begins to balance out. C9 continues to pick off people in the mid lane with their ultimates giving Bang his second death of the game on Senna. EG continues to struggle in the mid game, unable to match C9s pacing of fast gameplay causing them to get caught out one by one.

EG secures the third dragon bringing them to soul point, but loses three of their members in the process. C9 turns to baron, but at the last second Svenskeren sneaks into the baron and steals it as it falls to 400 HP. As EG looks to the group to start their baron push, Zeyzal gets caught attempting to secure vision causing the game to stall out as EG is unable to push with their baron. As EG is looking to group again Nisqy’s Twisted Fate finds Bang’s Senna leading to EG getting wiped by C9 while also allowing C9 to deny EG’s soulpoint. C9 is able to get the baron at 29 minutes leading to C9 hovering at a 10k gold lead. C9 cleans up one more fight allowing them to end with a baron push in a clean 3-0 win against EG.