The LCS is going to look a whole lot different in 2021.

Today, LoL Esports released a post detailing LCS format changes for next season. These changes were hinted at a while back but were finally confirmed today. As stated in the post, these changes were made with the goal of helping "develop NA into the competitive region we all want it to be." 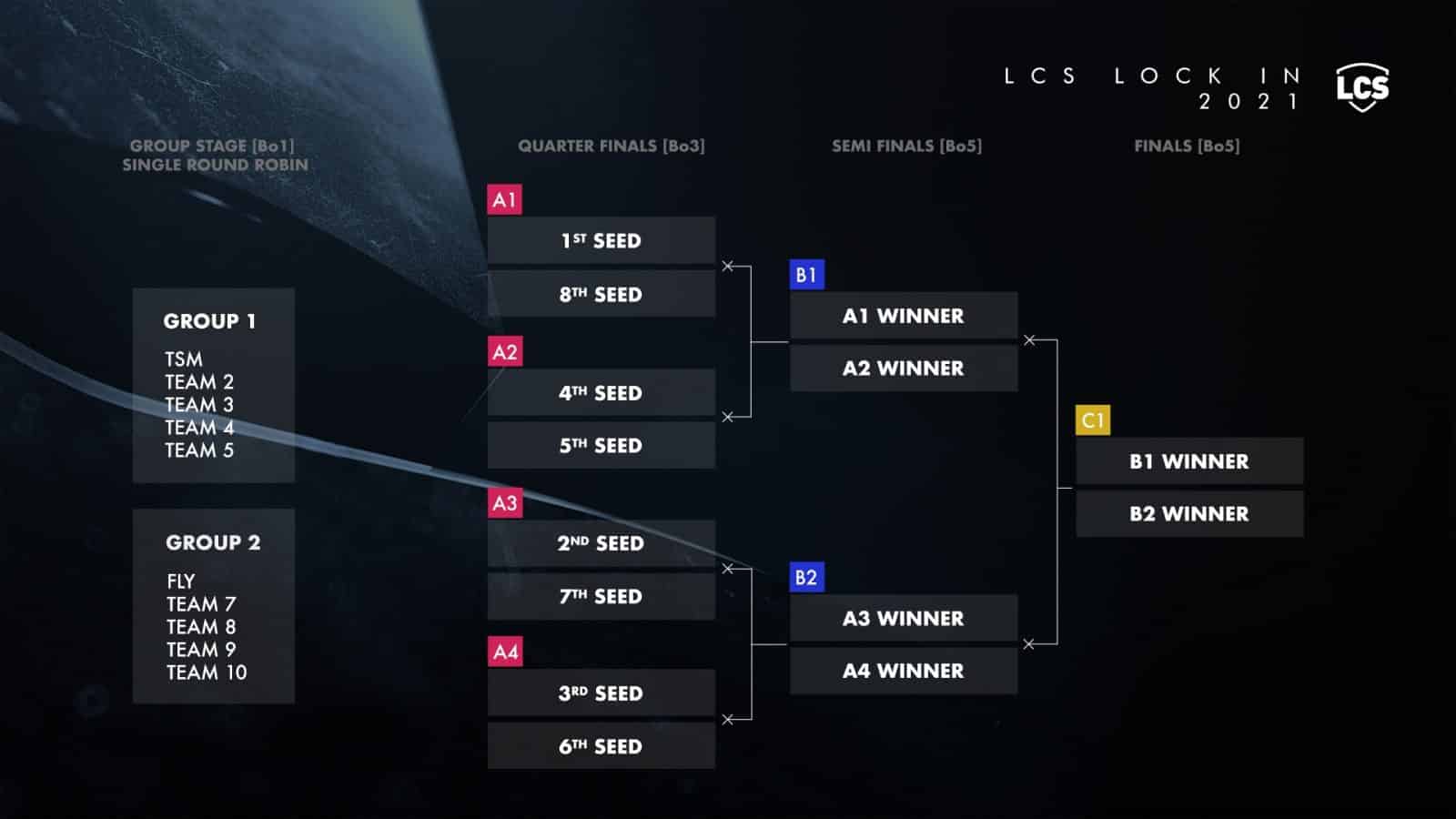 At the start of the split, a new tournament will be played between all ten teams. Though it's not crucial for the rest of the season, there are still some stakes on the line. First off, the teams will fight for a $150k grand prize and $50k to a charity of their choice. In addition, the winner gets side selection for game five of the regular season if the teams are head-to-head. This could be huge for potential playoffs/Worlds hopes.

The tournament itself will start with a four-day round-robin Group Stage. Interestingly, the groups will be drafted by the two LCS 2020 Summer Split Finalists, TSM and FlyQuest. After that, the top eight teams move into a single-elimination bracket all the way to the Finals, with the Semifinals and Finals being best-of-five. The LCS Lock-in is set to begin on January 15 and end on January 31.

The most exciting part of the announcement for viewers is definitely the fact that every weekend there will be three days of games, with five games each. Last year, the LCS attempted to introduce a third day of games each weekend but with only a couple of games. Seeing as these half days weren't received that well, they decided to go all-out in 2021 and make the broadcasts the normal, full ones fans most enjoy. The weekly schedule will look like this:

To start, while the season will still be split up into Spring and Summer Splits, the rankings for them aren't separate. This means that the spring does indeed matter in the final LCS Championship at the end of the year and for Worlds seeding. The Spring Split will feature a double round-robin and take place between February 5 and March 14.

Afterward, the top six placed teams will take part in the Mid Season Showdown ("MSS"). This mini-tournament will decide which team represents North America at the Mid Season Invitational ("MSI"). The new MSS is currently slated for March 20 to April 11.

"The MSS will feature the top six teams from Spring Split in a double-elimination bracket nearly identical to 2020 Spring Playoffs, with fifth and sixth seeds starting in the lower bracket. But in 2021, first seed must play fourth seed; side selection always goes to the team that most recently dropped from the upper bracket; and ties are broken by seeding." At the end of the road is the LCS Championship. As mentioned earlier, the top eight teams from both Spring and Summer will participate in this double-elimination bracket. This looks familiar, as the 2020 LCS Summer Playoffs looked identical, but with some notable changes. They include:

As before, the three top-placers from the LCS Championship will secure their place in the World Championship. Hopefully, with this new format, NA's representatives will be better off to go against the international competition and finally bring some pride to the region.